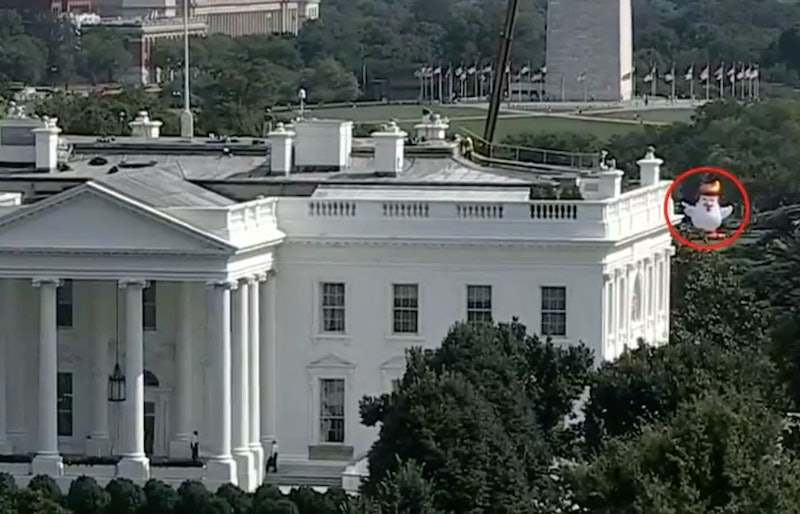 Well, here's something you don't see everyday. Amid an awful lot of hugely weighty, serious issues facing the United States, both in terms of domestic politics and international affairs, somebody decided to play a pointed joke on President Donald Trump. Specifically, sometime on Wednesday afternoon, someone floated a balloon of a rooster Trump outside the White House, drawing some attention on social media.

The look of it is virtually identical to the "rooster-ified" image of Trump that's taken China by storm in recent months, most prominently in the form of an enormous statue. With an alabaster-white body, a golden shock of hair, and its wings outstretched in stereotypical Trump-esque gestures ― one hand point out, the other doing, well, one of those weird hand gestures he does ― it doesn't take more than a second to recognize it as a send-up of the American president.

And although it's unclear who masterminded the prank or how the balloon physically got there, it was floating above the White House grounds for all to see on Wednesday. Here's what it looked like, by way of images posted to social media ― it makes for quite a striking resemblance, doesn't it?

If you're interested in watching a livestream of the rooster balloon's curious presence, you can see it on Facebook Live thanks to Fox 10 Phoenix. Needless to say, this probably isn't the sort of gesture Trump himself appreciates, although he's out of town at the moment ― it's worth remembering, amid all the recent tumult and international tensions, that he's currently on a 17-day "working vacation" at his golf club in Bedminster, New Jersey. And whatever else he's doing there, he's clearly getting in some time on the links, too.

Similar balloons of Trump as a rooster have been available in China since at least January, with the original image having been commissioned by a real estate developer. They haven't been nearly as visible stateside so far, but perhaps this high-profile prank will help change that, and get the image some more mainstream exposure on American shores.

There's still been no word about how the balloon got there, or who precisely the clever prankster was who got it aloft so close to the walls of the White House. But sometimes it's important to embrace the mysteries in life, right? Especially when the mystery involves high-precision political trolling and anthropomorphic rooster balloons.