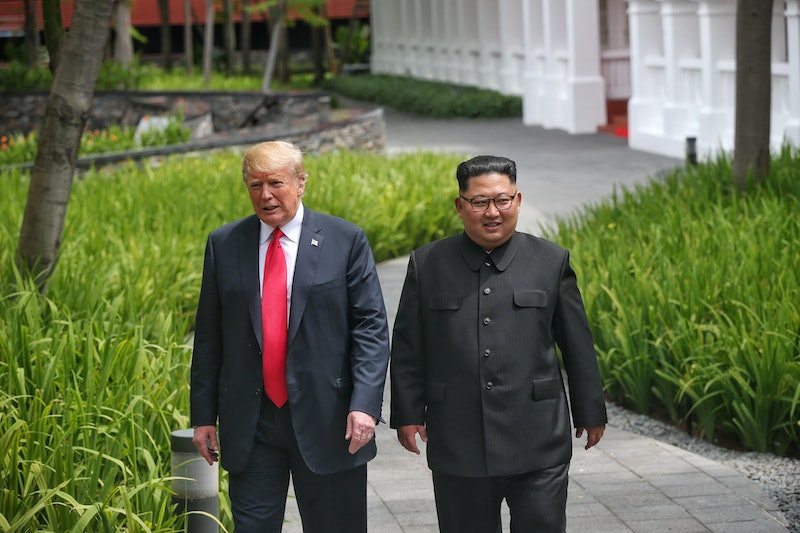 Just in case it wasn't already clear, President Trump made no bones about the fact that he's a fan of Kim Jong Un's leadership style in a Friday morning interview with Fox News. You might want to sit down before reading Trump's comment about Kim: the president praised the dictator as a "strong head" of his country and expressed his desire for "my people" to "sit up at attention" like the North Koreans do for Kim.

Trump's exact and full quote to Fox News was: "He's the head of a country, and I mean he's the strong head. Don't let anyone think anything different. He speaks and his people sit up at attention. I want my people to do the same."

It's crucial to note here that the reason millions of North Koreans are compelled to "sit up at attention" when Kim opens his mouth has everything to do with the North Korean regime's merciless punishment of those who don't obey. A 2017 World Report from Human Rights Watch accuses North Korea's government of "murder, enslavement, torture, imprisonment, rape, forced abortion, and other sexual violence" on a mass scale.

Trump has defended his positive take on Kim, telling a reporter that his unprecedented praise of the dictator is an intentional strategy to prevent nuclear war. When asked by a reporter Friday how he could defend North Korea's human rights record, Trump replied: "You know why? Because I don't want to see a nuclear weapon destroy you and your family."

Trump has been downplaying Kim's alleged human rights abuses for a while now. At his first press conference following the recent summit between the two leaders in Singapore, Trump conceded that conditions in North Korea may be "rough," but qualified that life is "rough in a lot of places, by the way, not just there."

Then on Wednesday, Trump sat down for an interview with Fox News anchor Bret Baier. When Baier pushed Trump on Kim's record as a "killer," the president more or less deflected. "He's a tough guy," Trump replied, before going on to commend Kim as the "one in 10,000" individuals who could take over a country at the ripe age of 27. "He's a very smart guy, a great negotiator," Trump said.

Baier kept at it, bringing up the fact that Kim's done some "really bad things." Trump then repeated his defense of Kim from his first post-summit press conference, telling Baier, "Yeah, but so have a lot of other people done some really bad things."

Kim is not the only authoritarian leader credibly accused of human rights crimes that Trump has praised. Likely the most well-known amongst the group is Russian President Vladimir Putin, to whom Trump has been handing compliments since the presidential campaign.

Putin has been described by Trump as "very much of a leader," and the president has continuously denied Russian interference in the 2016 election, despite agreement in the U.S. intelligence community to the contrary. That's to say nothing of Putin's invasion of Ukraine, annexation of Crimea, alleged role in assassinating political opponents, and his military support of Syrian president Bashar Assad (who is believed to be responsible for killing up to half a million of his own people).

Trump has also called Chinese president Xi Jingping a "very good man." As outlined at NPR, China does not preclude the torture of prisoners, is the world's leading executioner of prisoners, and engages in extensive censorship of the internet. And during a meeting in 2017 with Philippine President Rodrigo Duterte, Trump failed to bring up the issue of human rights. Since Duterte began a brutal crackdown on drug dealing, 7,000 people have been killed throughout the country. Still, Trump said he and Duterte shared a "great relationship."

Trump may want his "people" to behave with the same unwavering obedience as Kim demands in North Korea, but it's unclear whether he understands exactly why the American people are different from the North Koreans in that regard.

More like this
Why Eurovision 2023's Host City Won’t Be Revealed For A While Yet
By Sam Ramsden and Rachel Mantock
Are John Legend & Kanye West Still Friends? The Singer’s Latest Update Is Candid
By Brad Witter
The WAGatha Christie Verdict Is In – & The Court Has Ruled In Rooney's Favour
By Bustle UK
13 Photos Of Princess Charlotte Loving The Commonwealth Games
By Sam Rogers
Get Even More From Bustle — Sign Up For The Newsletter