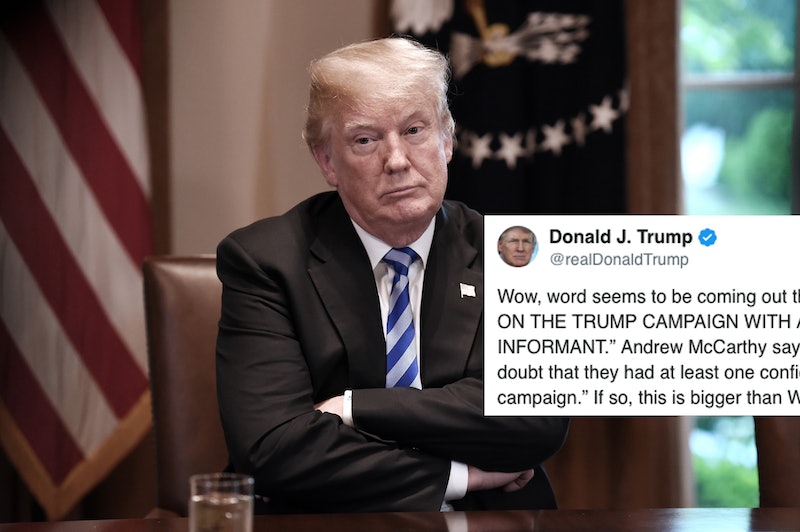 Back in August, Fusion GPS co-founder Glenn Simpson alleged before the Senate Judiciary Committee that the FBI had placed an informant inside Donald Trump's campaign in 2016. Now, both Trump and Rudy Giuliani — the president's newly appointed lawyer — seem to have bought into this Trump investigation conspiracy theory.

On Wednesday, Giuliani — who was once the mayor of New York City — told Fox News' Laura Ingraham that the presence of an FBI informant in the Trump campaign was a real possibility. After initially telling Ingraham that he didn't know whether Simpson's claim was true, he brought up the topic again later in the interview.

"What they did with Manafort, what they did with Michael Cohen, all the illegitimate things they’ve done — possibly placing a spy in the Trump campaign — all these things are areas where indictments have been dismissed because of government misconduct," Giuliani told Ingraham. Giuliani was referring to recent FBI raids on the homes of Trump attorney Michael Cohen and former Trump campaign manager Paul Manafort, according to The Hill.

Shortly thereafter, Trump plugged this conspiracy theory himself. The president took to Twitter late Wednesday night to accuse "the Obama FBI" of spying on his 2016 campaign.

"Wow, word seems to be coming out that the Obama FBI 'SPIED ON THE TRUMP CAMPAIGN WITH AN EMBEDDED INFORMANT,'" Trump tweeted. "Andrew McCarthy says, 'There’s probably no doubt that they had at least one confidential informant in the campaign.' If so, this is bigger than Watergate!"

Trump attributed the theory of an "embedded informant" to Andrew McCarthy, an editor at the conservative National Review who published a column earlier this week about Simpson's allegations. Simpson, in turn, told the Senate Judiciary Committee that he had gotten the information about an FBI informant from Christopher Steele, a former British Intelligence official whose memos made up the controversial Trump-Russia dossier compiled on behalf of Hillary Clinton's campaign.

According to The Hill, Simpson — whose firm compiled the Steele dossier — told the committee the FBI had already been investigating Trump's team before the dossier had been completed. He reportedly got this information from Steele, who allegedly met with the FBI in the fall of 2016 to talk about the possibility of Russian interference in the presidential election — and the FBI reportedly told him that they were already aware of this possibility.

The New York Times confirmed earlier this week that the FBI did not start investigating the Trump campaign's ties with Russia because of the Steele dossier. However, The Times reported that the FBI instead launched its investigation following a meeting between an Australian ambassador and George Papadopoulos, who once advised Trump on foreign policy.

Nonetheless, the claim that the FBI had embedded an informant in the Trump campaign was even more widely debated when earlier this week, The Times published its story about the origins of the Trump-Russia investigation. Roughly halfway through the story, The Times briefly mentioned the possibility of an FBI informant — and conservative analysts have since used this report to argue that the FBI is attempting to frame Trump for potential ties to Russia.

Trump and Giuliani are pushing this FBI informant theory just as more than 2,000 pages of Judiciary Committee interview transcripts have been released to the public. Earlier this week, the committee released notes and transcripts from a now-infamous meeting between Donald Trump Jr. and a Russian lawyer whom he reportedly believed would have political "dirt" on Clinton. This meeting has been under significant scrutiny during Special Counsel Robert Mueller's Russia probe, which Trump and his allies are trying to bring to a halt.