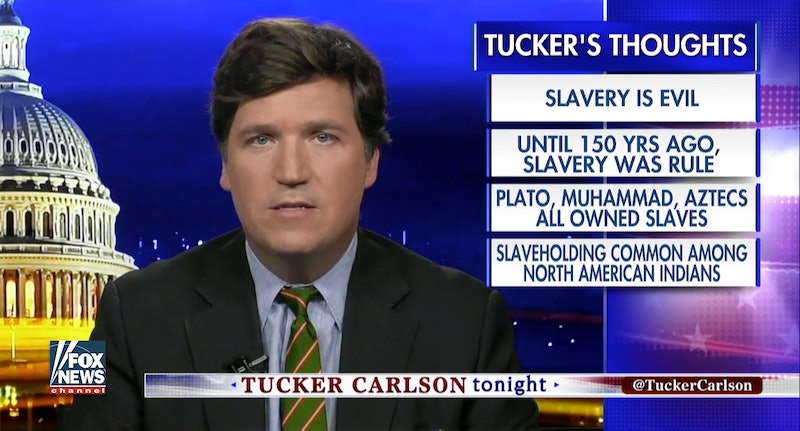 It seems like the most natural things to condemn — like white supremacy and neo-nazism — have become sort of a struggle for some people in politics and media at this particular culture moment. In a broadcast on Tuesday night, Fox's Tucker Carlson's segment on slavery and confederate monuments drew an incredibly upsetting conclusion, as you might imagine.

When addressing comments from President Trump about how movements to remove confederate statues could be a gateway to taking down statues of the Founding Fathers, an uncomfortable break-down appeared on the screen next to his head reading "Slavery is evil. Until 150 yrs ago, slavery was rule. Plato, Muhammad, Aztecs all owned slaves. Slaveholding common among North American Indians."

Noting that the majority of the signers of the Declaration of Independence participated in slavery, Carlson rallied against the notion that they'd be considered completely evil — because slavery was a normalized institution at that time in history.

[S]lavery is evil. ... Up until 150 years ago when a group of brave Americans fought and died to finally put an end to it, slavery was the rule, rather than the exception around the world. ... None of this is a defense of the atrocity of human bondage. ... But does that make what they wrote illegitimate? If these men were simply racist villains and that's all they were, then the society they created is as evil as they were.

Further, Carlson said leftist "radicals" looking to "tear down" the rights of individuals is an attack on the rights of free speech.

"Is that the country you want to live in?" Carlson asked. "If it's not, now's the time to speak up."

However, unfortunately for Carlson, his argument ultimately comes out to be a lot of energy and effort allotted to defending tributes to institutions built on white supremacy. That's what the movement to take-down confederate monuments is all about. Framing the concerns of honoring Confederate figures (who explicitly fought to keep part of the population enslaved) as an attack on free speech is as reductive as it is wrong. That's particularly true when there are literally groups of people taking to the streets performing Nazi salutes and brandishing swastikas.

Calling for people to put aside criticisms of atrocities because they were considered normal is a reach. Plenty of other horrible things were once legal and cool by the letter of the law — treating women with "hysteria" with clitoridectomies, the routine practice of sending people with disabilities to institutions, removing Native American children from their homes, for example. However, these things don't get talking heads or chyrons urging people to ignore their devastating impact because it's tied into a partisan debate. (Because that would be insane.)

TL;DR: History is full of ignorant, evil activity — but what we say and do about that evil now is what matters most.

And look, when you're facing a great national shame (read: slavery) that has a lasting, devastating effect on the population, you need to know when to take the L. Chances are any thought with "Slavery is bad, but..." is going to go south real quick.