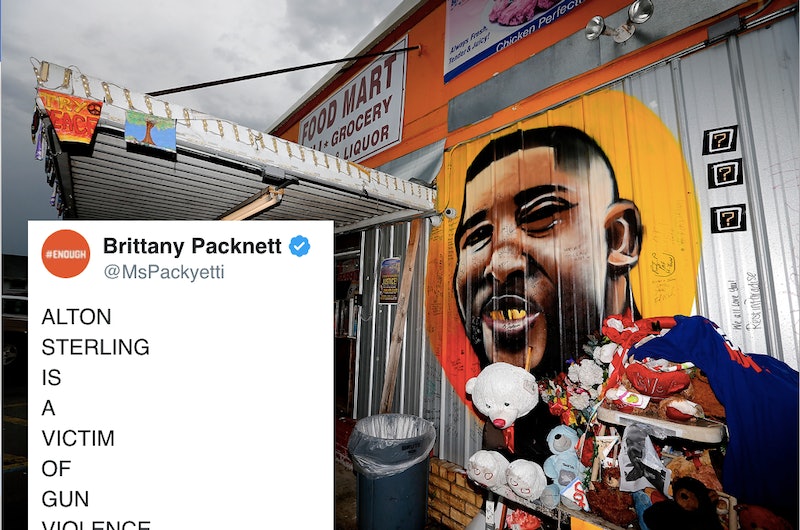 On Tuesday, Louisiana Attorney General Jeff Landry announced that no charges would be filed against two Baton Rouge police officers involved in the 2016 fatal shooting of a black man outside of a local convenience store. This announcement came just three days after massive gun control protests swept the across the nation over the weekend. Many on Twitter found the lack of charges to be cruelly unjust, and this one tweet about Alton Sterling's death sums up why.

"ALTON STERLING IS A VICTIM OF GUN VIOLENCE. TOO," tweeted activist and writer Brittany Packnett. "Don't you dare stay silent."

Packnett was among the many voices demanding that those who support or recently participated in gun control demonstrations do not remain complacent in the face of a gun death that is neither middle class, white, nor suburban. Sterling's death at the hands of police was met with widespread outrage among the black community, but that and other innocent black people who were fatally shot by the police had not stoked the same amount of attention or public support that the predominately non-black student activists who spearheaded March 24's March For Our Lives have. The march was largely organized by survivors of a fatal Feb. 14 school shooting in Parkland, Florida, which left 17 students and staff dead at Marjory Stoneman Douglas High School (MSD).

No movement, however well-intended, however, escapes critique, and the March For Our Lives was no exception. As the march progressed, and in the days afterward, many on Twitter were quick to point out that activists who took to the streets after black Americans were killed by gun violence weren't portrayed as positively by news outlets and social media.

Echoes of "where was the support for BLM?" soared across the Twitter world as onlookers grappled with making sense of the massive demonstration. Some also said that Black Lives Matter (BLM) activists weren't handed the coveted blue checkmark on Twitter, which typically signifies that the account holds both legitimacy and a perceived social value, like the Parkland students were.

"Imma just say something and whatever y'all choose to do with it is up to y'all," tweeted user @Bn7ght, for example. "Black Lives Matter marched for my life and the lives of other young people that look just like me in 2016 and were called thugs all over social media and the news. Where was this support then?"

And so, Packnett's tweet confronts precisely that issue, asking that gun control activists remember to fight just as hard for gun violence victims who are black as they do for those who aren't. After the news broke out of Louisiana, others expressed similar sentiments.

"To all white people: Alton Sterling was killed in cold blood by an instrument of the US government," tweeted Mikel Jollett. "The fear you feel of random shootings at high schools, black people feel at every interaction w police who may end a black life without reason or consequence. This is OUR shame."

Far from saying that the march shouldn't have happened, or that it was harmful, many highlighted the fact that racism, particularly the institutional kind, rears it head even in the progressive protest world, which is supposed to be actively combat prejudices and discrimination.

Sterling's death, and that of other black people who are fatally shot by police, is necessarily different than those who were shot down at the high school they attended or worked at. They weren't shot by members of law enforcement, for example, and they weren't repeatedly tased first. But they were all killed by guns, weapons which have been taking lives from across the United States at an alarmingly rapid rate.

Voices like Packnett's ask protestors not to selectively decide which gun-related deaths deserve outrage. They serve as a reminder that gun control is a dynamic issue that has just as much to do with protecting black people like Sterling as it does with protecting unsuspecting high schoolers.