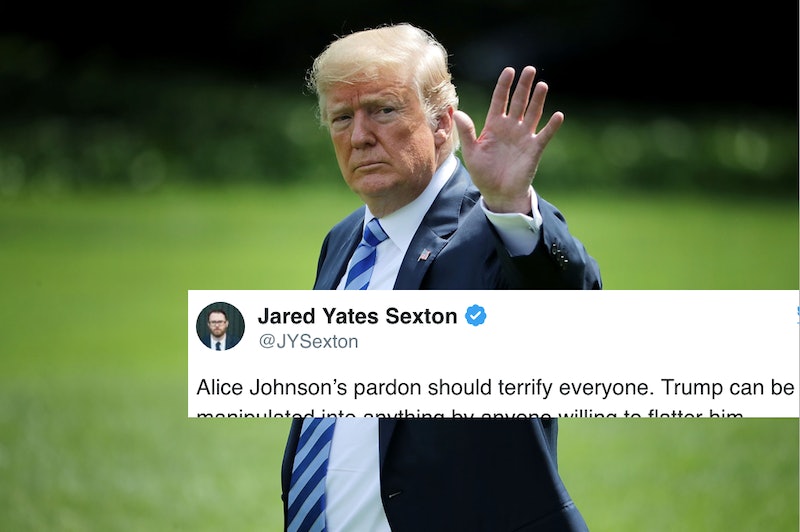 It took exactly one week for President Trump to flex his executive power on Alice Marie Johnson's case. Seven days after Kim Kardashian visited the White House to discuss a pardoning for Johnson, President Trump commuted her life sentence on Wednesday. And author and political commentator Jared Yates Sexton's tweet about Trump commuting Johnson's sentence basically sums up much of the reaction: Trump's susceptibility to flattery and celebrity speaks to a larger, more concerning issue.

Many have sympathized with Johnson's case as one illustrative of the country's broken judicial system (she was serving a life sentence as a first-time nonviolent drug offender). But Sexton pointed out that the motivation that led to Trump granting her clemency is not particularly heartening.

"Alice Johnson's pardon should terrify everyone. Trump can be manipulated into anything by anyone willing to flatter him," he wrote. Sexton continued in another tweet: "She deserved a pardon, but it’s completely contradictory to the only principles Trump has held firm with. He moved on it because a celebrity flattered and appealed to him. That’s...not great."

Plenty of people on Twitter concurred. Many praised Kardashian's advocacy for Johnson and agreed that Johnson did not deserve to serve a life sentence for the crime she committed, but they also expressed concern over just how Trump has been incentivized to use his pardoning power.

A pattern has emerged in the people Trump has pardoned so far. One either has to be an ally or a friend to the president, a celebrity, or someone marginally connected to those people in some way. In Johnson's case, it was Kardashian who brought her case to Trump's attention.

Trump's first pardon was issued to Joe Arpaio, a controversial pro-Trump figure who has displayed no remorse for his inhumane treatment of immigrants at a jail he ran as sheriff and beyond. Trump has since pardoned more conservative figures; he also posthumously pardoned Jack Johnson, the late boxer, after Sylvester Stallone personally advocated for it. Trump also said he is considering pardoning Martha Stewart and commuting former Illinois Gov. Rod Blagojevich's sentence, both of whom have a history with The Apprentice.

Many pointed to how this displayed the oversized power of celebrity in the Trump White House — a talking point Trump had used against President Obama during the election. Randi Mayem Singer, a screenwriter, wrote on Twitter, "Hey Kim Kardashian, any chance you can help the babies and children in cages after being ripped from their mothers' arms? Because I guess that's where we are now. Nobody else is getting through."

The justice system in the United States is such that there are thousands of people like Johnson who are serving sentences disproportionate to the gravity of their crimes. And those people do not have the backing of a celebrity to bring their case to the president's attention.

According to Prison Policy Initiative, half a million people in the United States are serving time in prison for a drug offense. The federal incarceration system is defined chiefly by nonviolent drug convictions, according to the website.

Johnson's commutation is one deserving of celebration, and Kardashian's advocacy deserving of praise. Yet the way President Trump has gone about exercising his power to pardon people has been worrying for many people.

It's also worth noting that Trump didn't pardon Johnson, which would have wiped clean her criminal record; he commuted her sentence. He has, however, pardoned conservatives like Arpaio and Dinesh D'Souza (who has blamed 9/11 on "the cultural left," among his other highly controversial opinions.)

And it seems like the president has only started to truly use his pardoning power. The Washington Post reported that Trump has asked aides to come up with a list of people he could possibly pardon, a move that has reportedly angered some aides over what the Post described as "celebrity-driven decisions." That could ultimately lead to Trump pardoning himself, as he so suggested this past week.