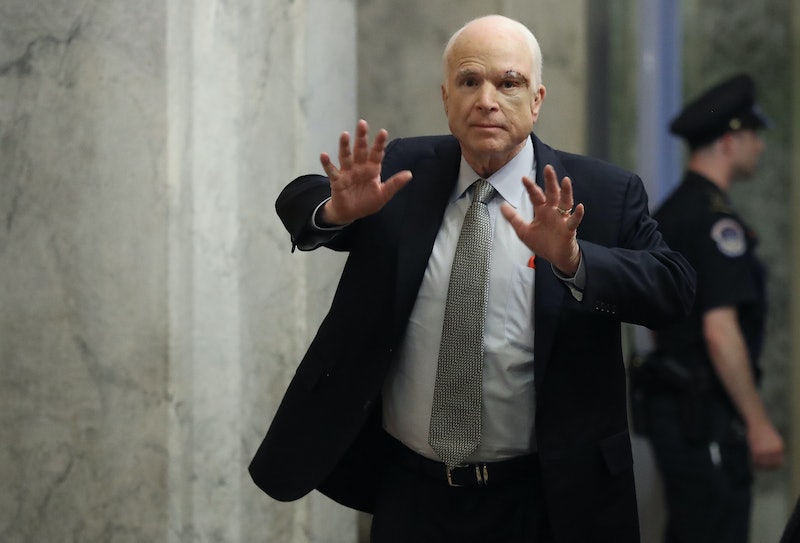 On Tuesday, in an even 50-50 vote, with Vice President Mike Pence breaking the tie, Senate Republicans passed a motion to proceed to debate its health care efforts, whether that amounts to its hyper-controversial Obamacare replacement bill or simply a full repeal. One senator's dramatic arrival to cast a deciding vote has caused a lot of controversy, and this one tweet about John McCain's health care vote sums up how a lot of people are feeling about it.

It took months of legislative wrangling and multiple premature claims that the GOP's repeal efforts had fallen apart, but now Senate Majority Leader Mitch McConnell has pushed the repeal-or-replace effort closer to the finish line than its ever been, on the precipice of a vote that could totally undo the Affordable Care Act and replace it either with a bill that would cost an estimated 22 million Americans their insurance over the next ten years ― while cutting Medicaid by nearly $800 billion ― or with nothing, which would strip insurance from 32 million.

In short, for the Americans who rely on the ACA and Medicaid ― many of America's neediest people ― it's a frightening situation. That's spoken to by the fervency of the protests against the GOP's efforts. And it ultimately would've been impossible without McCain, who flew into Washington, D.C. amid a bout with brain cancer to cast the deciding vote to proceed to debate.

As the above tweet from MSNBC's Joy Reid notes, McCain indeed returned to the Senate to a standing ovation, both from his Republican and Democratic colleagues, plainly in acknowledgement of the five-term Arizona senator's determination to be present despite his diagnosis. McCain was not the sole senator to cast the so-called "deciding" vote, to be clear ― it passed in a tie, which means every vote in favor was decisive. It therefore would not, however, have passed without him.

And yet all the Democrats who cheered him for his supposed bravery, or out of a sense of admiration, respect, decorum, were also cheering the man whose vote ultimately pushed the Affordable Care Act to the brink, imperiling the health care of tens of millions of Americans in the process.

Of course, this isn't actually the final vote to decide what'll happen to the ACA, which means McCain's legacy on this particular matter isn't yet set in stone. During his speech following his vote, he again called for the Senate to return to "normal order," and claimed he would not vote for the bill as currently written. Although, considering the replacement bill now requires 60 votes to break a filibuster, thanks to the Senate parliamentarian, it's more likely he'll ultimately be asked to vote on a full repeal.