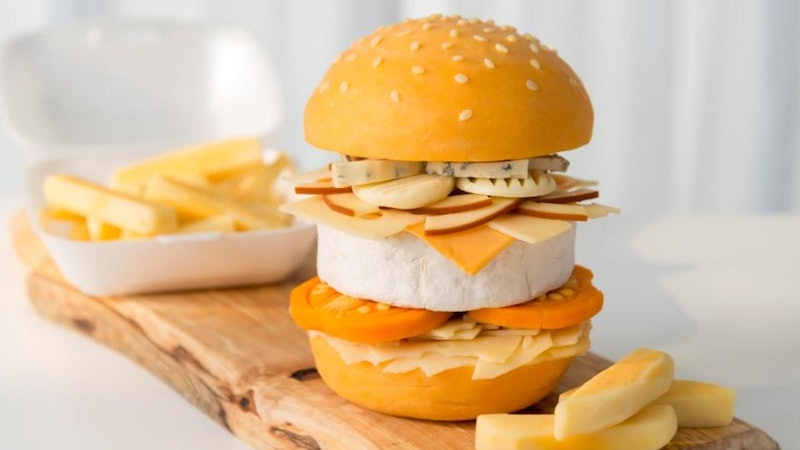 I like to approach my food the way I think Aristotle would, following the premise that "The whole is greater than the sum of its parts." I think the quality of a sandwich is based in how well it marries its different components. But naturally, not everyone agrees with me. Harriet the Spy brought attention to the southern classic tomato sandwich, and everyone knows a person who prefers a BLT with just B. If a sandwich made with only one ingredient (no really, only one) sounds gouda to you, prepare yourself for this cheeseburger made entirely out of different cheeses.

According to Munchies, The Ultimate Cheeseburger is the product of the culinary masterminds (or mad scientists) from Hungryhouse — a food delivery service similar to the U.S. companies Seamless or Grubhub — in the U.K. It begins with a bun made of mature cheddar, with "sesame seeds" made of mozzarella. The patty is made of camembert, with Babybel acting as the pickles, a mix of Eda and American cheese serving as the lettuce, and Red Leicester cut into the shape of tomatoes. Top it off with some stilton relish and "onion rings" made from German smoked cheese (this is a premium burger.) Who needs vegetables, amirite??

The Ultimate Cheeseburger was, regrettably, a one-time promotion by Hungryhouse during the 2017 holiday season. So even if you're based in the UK, you'll have to find another fix for your cheddar craving. (But hey, at least you have the recipe, right?)

It's no secret people love a culinary gimmick (remember the rainbow bagels that broke the internet?). But really, if you're human on the internet, you know all too well that this is just the tip of the iceberg in terms of the world of outrageous cheese edibles. In October, American dairy lovers rejoiced over the introduction of cheese tea. Yes, you read that correctly. Because who wouldn't think of making their favorite dairy product consumable through a straw? According to Condé Nast Traveler, the drink, which originated in Taiwan, began by adding frothy whipped cheese to the tops of cups of tea in a way that ultimately resembles a macchiato. The trend has made its way through many large cities in East Asia, and has recently traveled across the ocean to the United States.

Kate Springer, a writer based in Hong Kong, waited two hours to sample the beverage from a tea shop called HEYTEA in Guangzhou, the capital of China's Guangdong province. After a two and a half hour wait, Springer finally gets a chance to sample the beverage, and proclaims in Conde Nast Traveler, "This pairing actually works — the salted cheese plays up the tea’s floral notes, and the tea, in turn, tastes smooth and creamy." It's the same logic employed with confections like salted caramel, or fruit mixed with cheese.

If tea isn't your beverage of choice, but you're dreaming about demolishing the Ultimate Cheeseburger, you may also be interested in a growing trend in the wedding world, that maintains a similar idea to The Ultimate Cheeseburger. I bet you can guess where this is going, three words: CHEESE. WEDDING. CAKES. That's right, couples are opting to forego the frosting for fromage on their big days. Murray's Cheese is spearheading the trend with the release of its cheese cake towers (that's two words: cheese. cake; not cheesecake). The specialty food retailer in New York, New York allows couples to choose an arrangement of cheese wheels, stacked and accessorized with fresh fruit and flowers to match the color scheme of their wedding. Yes, it is a nontraditional approach, but it may also be the alternative gluten-sensitive brides and grooms have been searching for.

The good news is in the face of all this viral cheesiness is that a love for cheese will never go unsatisfied on the internet — and new studies are even lauding a few key health benefits from eating cheese as well.