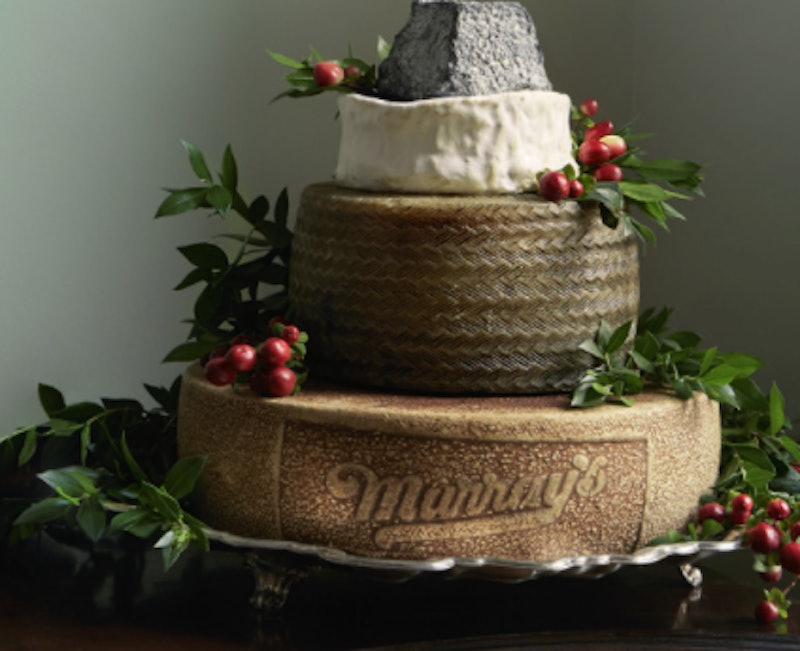 Stop everything you're doing. The future is here. No, not flying cars. No, not robots coexisting with humans. I'm talking about wedding cakes made of cheese. Cheese cakes. Leaning towers of cheese-a. Murray's Cheese, located in New York, New York, is perhaps at the forefront of the trend. While some people might find it a little too cheesy, we think it's pretty grate.

The "tiers" of the cake are made with wheels of cheese. While Murray's offers pre-designed "cheese towers" on their site, you can also select your own flavors to build an absolutely delectable cake of your own. And you deserve it. After all, you and your significant other make such a goud-a couple.

Now, let's get down to the nitty gritty. What kind of cheese are we talking, here? In a video from Refinery29's RSVP, Murray's Leigh Power explains the fine art of stacking cheese. Aside from choosing ones that are the appropriate size and shape, you should also pay attention to the combination of milk types, as well as cheese textures, considering combining aged cheeses with fresh ones.

Once they've stacked the wheels and decorated it to your heart's desire, it looks like a legit wedding cake, and you can slice it up and serve it the same!

I know there's a joke about "cutting the cheese" hiding in here somewhere...

Sweet dreams are made of cheese; and while some haters may disa-brie (CALL ME BUTTER, I'M ON A ROLL), our nation's cheese obsession has hit an all-time high. It turns out there's a perfectly reasonable explanation for why we're so in love with cheese: it's literally addictive. According to a study conducted by the University of Michigan published in 2015, processed foods higher in fat are more closely linked with addictive eating behaviors. You know one of the items that topped the list? Pizza.

Let's break it down further. Many dairy products that are at least moderately high in protein all have one thing in common: casein. Casein, a type of protein, is very unique, because it "breaks apart during digestion to release a whole host of opiates called casomorphins," explains Dr. Neal Barnard of the Physicians Committee for Responsible Medicine. As this happens, these opiates interact with opioid receptions, which are related to pain control, reward, and your brain's sense of addiction.

Not totally, but it does share similar qualities. And to be fair, there are also a number of health benefits of eating cheese.

This could explain why we love cheese so much, even though it smells funny and tastes disgusting half the time.

Murray's cheese towers couldn't come at a better time. According to a 2013 "report card" from the Center for Science in the Public Interest (which gave us a C- for dairy — ouch), back in 1970, we were consuming eight pounds of cheese per person per year. As of 2013, that number had skyrocketed to 23 pounds per person per year. We love eating cheese, and we're steadily eating more of it. Wouldn't it only make sense to swap out a sweet wedding cake for a cheesy one instead? Of course. We're drinking cheese tea. We dress up for National Cheese Lovers Day. We even celebrate Valentine's Day with cheesy treats. Was a wedding cake cheese tower honestly that far behind? Probably not. If we could marry cheese, we probably would.

The responses to RSVP's video seem to be largely positive, and as Power says in the video, you don't even have to get married to enjoy a cheese cake. Have a cheese baptism cake, a cheese retirement cake, a cheese I-just-broke-up-with-my-boyfriend cake.

It's always a good time for cheese cake.