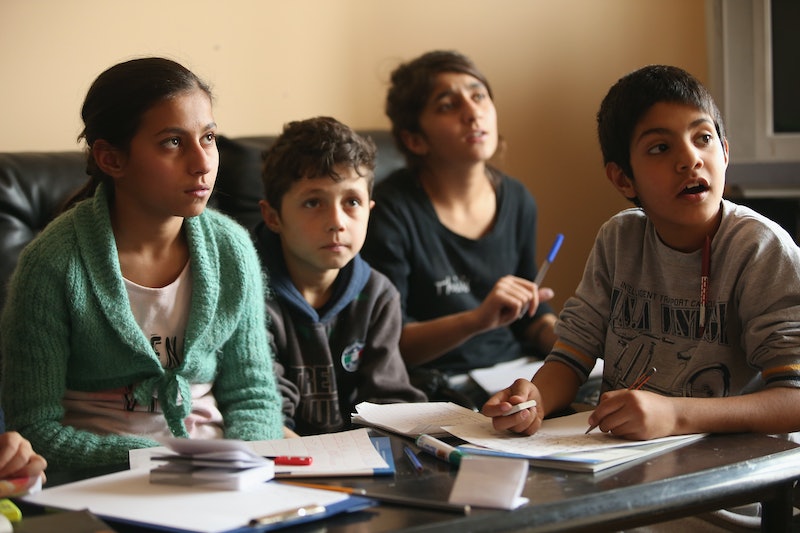 On Thursday, President Trump issued a press conference. Instead of headlines based on the content of his answers, most of the coverage has been (rightfully) dedicated to calling out and clarifying all the problems with how Trump went about the 75 minute event. For one, he did not really answer any questions. Instead, Trump rambled. He insulted reporters and news outlets. He ignored or deflected questions he didn't like. And in so doing, he distracted from the reality of the impact his policies have — like the human toll of Trump's ban on Syrian refugees, including children.

Trump drove the news cycle during his campaign, and he seems intent on doing the same now. It's important to ignore, when possible, his flippant comments or tweets, and try to remember that American policy can sometimes mean the difference between life and death. UNICEF has put together a moving video that serves as just such a needed reminder, comparing side-by-side the refugee journey of a Ahmed, a Syrian boy, with that of Harry, a Holocaust survivor. The stories share remarkable and heartbreaking similarities.

As both Harry and Ahmed relate, being driven from one's home to seek shelter elsewhere is always a dangerous journey. It is marked by fear, and an utter dependence on the goodwill of others. Between Trump's language and his policies, America at the governmental level does not appear all that interested in offering such goodwill to the many young refugees who so desperately need it.

The number of child refugees in the world today is staggering. According to Caryl Stern, the CEO of UNICEF USA, there are 50 million children who have been displaced, and 28 million of those cases are due to violence and war. To stop and reflect on that reality for a moment is to experience a perspective change.

I asked Stern if she thought Americans would be more open to accepting just child refugees, for a start. Her reply encompassed the apolitical nature of UNICEF, and closed by observing, "We should not simply see them as refugees or migrants, but as children first." And there does seem to be a connotation around the words "migrant" and "refugee," as if those categorizations diminish how we first think of them — not as children, but as some sad collateral damage of a problem that's not ours.

Of course, Trump's nonsense and gas lighting must be pointed out. But oftentimes in politics, a hierarchy of values must be established. I, for one, would be enormously grateful to see a protest for accepting Syrian refugees, especially children.

And it would be of inestimable help if the press ignored some of the intentional flamboyance of Trump's political incorrectness, and instead reminded Americans of what is at stake for children like Ahmed.