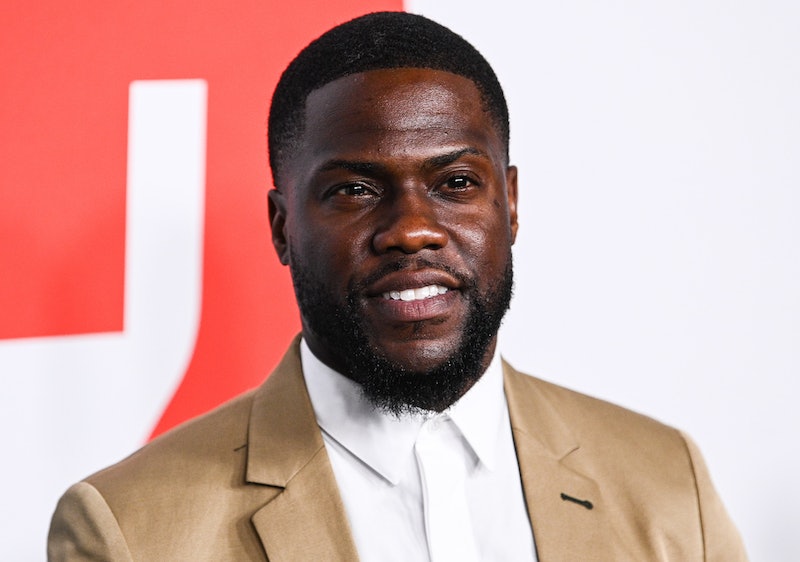 Fans of Kevin Hart have been on pins and needles ever since the news broke about the comedian's serious car crash in the early morning hours of Sept. 1. Now, the actor's wife Eniko Hart has given an update on Kevin Hart's condition following the crash, and it sounds like the Jumanji star is going to be all right. Hart was a passenger in his 1970 Plymouth Barracuda when its driver, producer Jared Black, lost control and rolled the vehicle into the ditch on Mulholland Highway in Calabasas, CA. The car's roof was crushed, and photos from the scene looked particularly horrifying.

Black and a third passenger, Rebecca Broxterman, were trapped in the car after the crash, but Hart — who suffered major back injuries in the crash — somehow managed to walk away from the scene to get help, according to Deadline. After rescue crews arrived, Hart was taken to Northridge Hospital Medical Center while Black, who also suffered major back injuries, was airlifted to Ronald Reagan UCLA Medical Center. Broxterman, who is Black's fiancée and Eniko's personal trainer, complained only of minor pain and did not suffer any serious injury. Hart wasn't so lucky, but thankfully, it sounds like the actor is already on the mend after a scary situation.

Eniko has revealed that her husband is "going to be just fine" following successful back surgery on the night of Sept. 1. Speaking to TMZ, she confirmed that her husband was awake, said he was "doing great," and stated that his spirits were "good." Although we still don't know the severity of the actor's injuries, it's at least comforting to hear that Hart is awake and apparently feeling relatively well. It's worth noting that Eniko was interviewed on her way back into the hospital after stepping out for a bit, so she understandably was not giving very detailed answers to the questions being asked of her by the TMZ reporter. TMZ also claims, from an unnamed source, that Hart is expected to remain in the hospital recovering for "at least a couple of days" and is expected to make a full recovery.

Since news broke of Hart's accident, there has been an outpouring of support from the Hollywood community. Dwayne "The Rock" Johnson, Hart's close friend and frequent collaborator, wrote on Instagram, "Stop messing with my emotions brother @kevinhart4real. We have a lot more laughing to do together. Love you man. Stay strong." Mindy Kaling wrote on Twitter, "Prayers up @KevinHart4real." And Bryan Cranston, who co-starred with Hart in the drama The Upside, wrote on Instagram, "I’ve just heard that @kevinhart4real was injured today in a car accident in Los Angeles. Let’s all send him positive energy and healing thoughts. He’s a good human. Get well soon, brother. B."

Everyone is certainly pulling for Hart to make a speedy recovery after his frightening accident, and it sounds like all those good vibes are making an impact. Hopefully, fans will be able to see Hart back to his wisecracking self very soon.

More like this
Jodie Turner-Smith & Joshua Jackson's Relationship Timeline Includes Her Proposing
By Jake Viswanath
J.Lo Wants To Make A Sequel To This Movie With Ben Affleck
By Jake Viswanath
Will Smith Reflects On "Horrific" Chris Rock Oscars Slap In First TV Interview
By Sam Ramsden
The 'Love, Lizzo' Harry Styles Scene Is Just 1 Moment That Made Fans Feel Seen
By Brad Witter
Get Even More From Bustle — Sign Up For The Newsletter