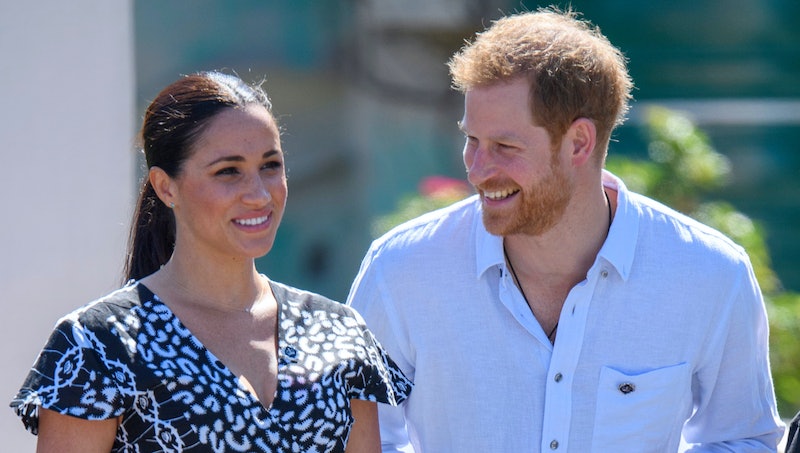 Most people would agree that finding a partner who looks out for us is pretty great. And while that usually involves taking care of us in the bigger ways (when we are sick or down, for example), the little things really do matter as well. Case in point: The Duke Of Sussex having The Duchess' back when her hair needed fixing. Yep, a video of Prince Harry fixing Meghan Markle's ponytail has surfaced, and it's all kinds of cute.

The video in question shows Harry smoothing down his wife's ponytail just in time for a photo opportunity. While Meghan's hair looked pretty perfect anyway, Harry wanted to ensure it was at its all-time best for the picture, smoothing it down and pulling it behind her back just before the camera went off.

The video was shared on a fan page of the Duchess of Sussex, and fans of the royal couple were loving the super sweet moment, leaving comments in their dozens.

"Harry is such a hands on husband. Gotta love him," wrote one Instagram user, while another one commented: "Awwww Prince Harry made sure the Duchess was picture ready. I love this." Another wrote the following: "Their Love and interaction together is AMAZING."

While the moment is undeniably lovely, it's not the first time Harry has stepped in to save the day when it comes to Meghan's hair, as the fan page points out. Back when the duchess was launching her charity cookbook, the wind took a turn and sent Meghan's locks into disarray, but Harry was there to sort things out. The duke, quickly noticing the elements had taken their toll on his wife's hair, reached over and smoothed out her hair so that she didn't have to.

Meghan and Harry are a noticeably tactile couple, so this recent move will come as no surprise to fans of the royal pair.

The video of Harry smoothing over Meghan's ponytail was taken in Africa, during the couple's royal tour. So far, they have both been very busy, first visiting Cape Town’s Nyanga Township. At the township, Harry and Meghan went to a workshop that teaches children about their rights and self-awareness, and promotes female empowerment to the girls.

Meghan made a short speech while at the township, notably telling the crowd: "While I'm here with my husband as a member of the royal family, I want you to know, I am here with you as a mother, a wife, as a woman, as a woman of colour and as your sister."

While there, the couple spoke with the community, and Meghan even had a little dance.

So far, they have also visited the District Six Museum, where they learnt about the work being done to relocate and reunite people affected by apartheid.

Most recently, the couple have also gone to Monwabisi Beach to learn all about Waves for Change, which supports local surf mentors who provide mental health services.

In the next few days, they will meet Archbishop Desmond Tutu and his wife, and will then part ways, with Harry visiting Botswana, Angola, and Malawi, and Meghan staying in South Africa.