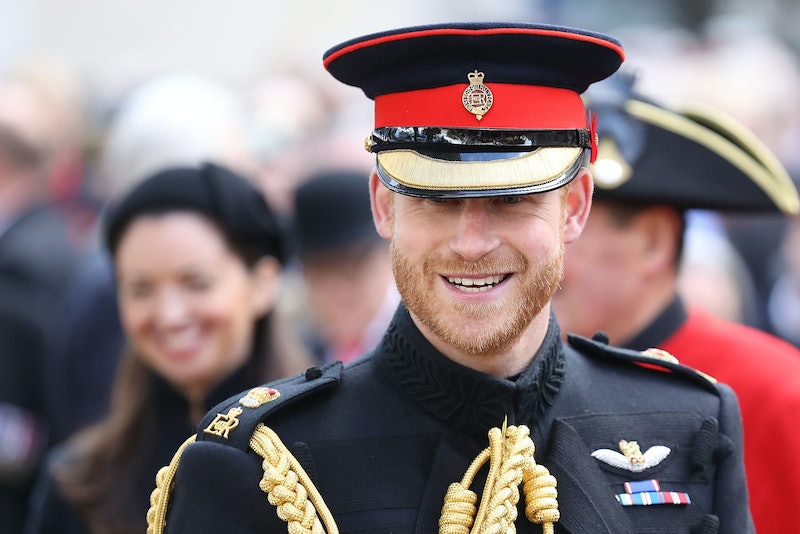 If you're a royal watcher or just a person who loves puppies (which is everyone), get ready, because you're about to see the cutest thing. As Cosmopolitan noted, Prince Harry played with puppies during one of his latest engagements. And, honestly, the video is almost a cuteness overload.

On Nov. 8, during his first royal event after his major overseas tour with Meghan Markle, the Duke of Sussex attended the 90th Field of Remembrance ceremony held in honor of those who lost their lives while in the armed forces. At the event, Harry, in full uniform, planted a Cross of Remembrance in front of the Graves of the Unknown Soldiers from World War I and World War II, according to Kensington Palace's official Twitter account. That wasn't the only major move he made during the event, of course. He also got the most adorable greeting ever from a little doggie mascot.

According to Lizzie Robinson, a royal producer for ITV News, Harry got some playtime in with the Staffordshire Regiment's newest and cutest mascot. In a clip that Robinson shared on Twitter, the prince could be seen greeting an eager puppy named Watchman VI, who was dressed up in his own little uniform. If that doesn't bring a smile to your face, I don't know what will.

It's likely that Harry has a ton of experience handling pups, since he reportedly has two of his own. One of the dogs he shares with his wife is Guy, whom Markle had prior to even meeting her now-husband. The former Suits star has had Guy for years now. According to People, she's had her pup since 2015 after adopting him from A Dog Dream's Rescue. Over the years, Markle posted numerous photos of her dog on her now-deleted Instagram, showing just how close their bond was.

Guy, who has since moved to the United Kingdom like his owner, has settled into his new life. Additionally, Guy has become a royal star in his own right, as People also noted that a children's book titled His Royal Dogness, Guy the Beagle: The Remarkable True Story of Meghan Markle's Rescue Dog is due for release in November.

In addition to Guy, the Duke and Duchess of Sussex have added another four-legged friend to their family. In early October, Harry and Markle confirmed that they adopted a second dog and they did so by correcting some false reports on the matter.

During their trip to Sussex, they visited the Survivor's Network, an organization that supports survivors of sexual assaults, where they received a drawing from Drawings of Dogs of their own pup, per Cosmopolitan.

When he accepted the gift, Harry said, while presumably thinking the drawing was of their new dog, "No one's even seen our dog," according to a video from the Daily Mail's royal reporter Rebecca English. Markle added, "I know, and they keep getting her name wrong." So, not only did they confirm that they had adopted another dog, but they also revealed that their dog is a girl. However, there weren't any other details about their new addition just yet.

It's clear that the Duke and Duchess of Sussex are dog people, as their two little doggos would showcase. And that only makes Harry's latest, cutest moment with Watchman VI that much more adorably.

More like this
Everything To Know About Meghan & Harry's Netflix Documentary
By Jake Viswanath
Here’s How 'The Crown' Will Cover Princess Diana's Tragic Death In Season 6
By Brad Witter
The 'Love, Lizzo' Harry Styles Scene Is Just 1 Moment That Made Fans Feel Seen
By Brad Witter
Kate Middleton Shares The Key To Building A "Happier Society" In A New Op-Ed
By Stephanie Topacio Long
Get Even More From Bustle — Sign Up For The Newsletter