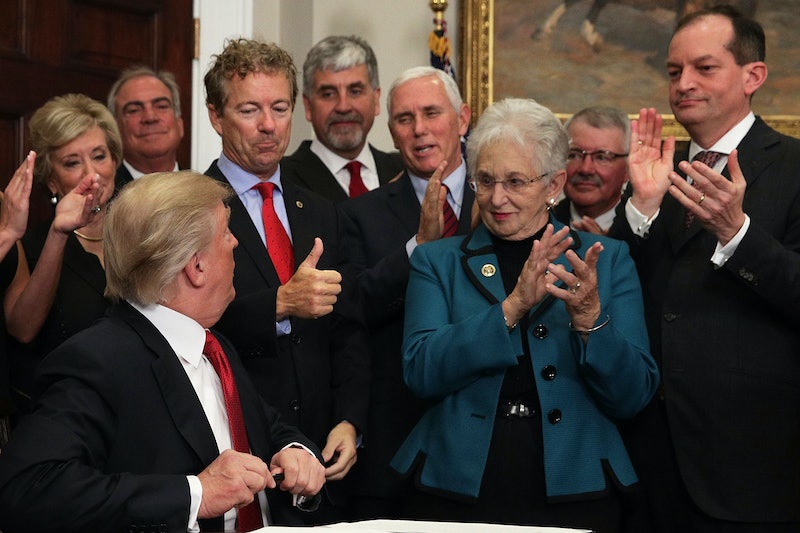 Sen. Rand Paul teamed up with Trump on Thursday in the latest move to slash parts of the Affordable Care Act, also known as Obamacare. The U.S. senator from Kentucky has historically issued caution or rejection in recent congressional attempts to undo the landmark legislation, but this week, he jumped on board as Trump prepared to sign an executive order regarding "association health plans." However, when it came time to put the plan into motion, Sen. Paul seemed uncomfortable being close to Trump, physically recoiling when the president entered the room.

In the video, Paul is speaking enthusiastically with other officials present. Then, when Trump enters from a door to Paul's left, the senator shrinks back into the crowd, looking to the side, looking down, looking anywhere except directly at the president whose executive order he was supposed to be supporting.

In the past, Paul hasn't always proven himself to be the most reliable Republican ally for Trump. Last month, he was one of the first Republican Congress members to come out against the last-ditch effort to repeal and replace Obamacare – the so-called Graham-Cassidy bill.

His argument was that the bill didn't go far enough to strip Obamacare of its teeth. Paul is known to advocate for a total repeal of the ACA, which by and large hasn't been realistically proposed.

"I can't support a bill that keeps 90% of Obamacare in place," the Senator tweeted on Sept. 15. "#GrahamCassidy is not repeal or replace, it is more Obamacare Lite."

The executive order that Sen. Paul decided to support was one that essentially seeks to create an Obamacare loophole. In it, Trump instructed federal agencies to work toward making it easier for so-called association health plans to include more types of members. Association health plans are systems by which groups of people band together to purchase health plans. This broadening would likely affect small businesses, but could also make way for individuals to join. The extent to which individuals might be allowed to participate in these plans, however, is currently unclear. Some critics are also concerned that the executive order would lead to the reclassifying of health plans so that they are potentially not subservient to Obamacare rules.

Many critics are concerned that younger, healthier people with smaller budgets will be attracted to these plans, which means that higher-risk groups and individuals would no longer be banding together in one group, covering costs from a joint money pool. Those who have more expensive health care costs would be left where they are, without the healthy "paying in." This could potentially destabilize the Obamacare markets.

"This will be a great plan [and] a big deal for millions of Americans," the senator tweeted on Oct. 10. "I’ve been working with @realDonaldTrump for months on this."

A lot of Trump's Thursday executive order consisted of asking federal agencies to conduct studies and develop policies. Because of this, the tangible ramifications of the order aren't clear, and by some estimates, won't be clear for another six months or so. It is a significant gutting of Obamacare, however, which is something Trump has been vying for for years. It was one of the most-repeated, core tenets of his presidential campaign. Despite this, Obamacare enrollment hit record highs in Trump's first year in the White House.

More like this
The UK Abortion Laws In 2022, Explained
By Sophie McEvoy
5 Ways To Stand In Solidarity With Women In America From The UK
By Sophie McEvoy
How To Fight For Reproductive Rights, Based On How Much Time You Have
By Courtney Young
How 5 People Upended Their Lives To Fight For Abortion Rights
By Hannah Smothers
Get Even More From Bustle — Sign Up For The Newsletter