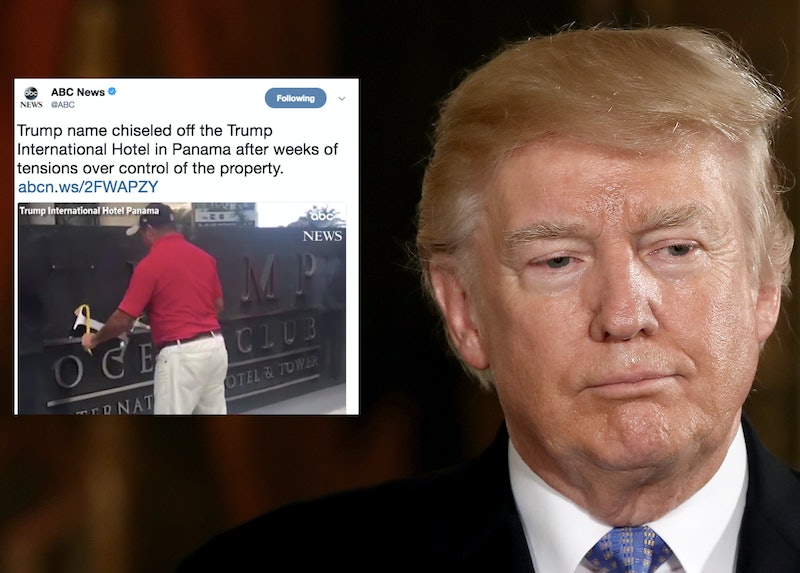 On Monday, a video depicting Trump's name being removed from the Panamanian branch of the Trump International Hotel began making the rounds on Twitter. The sign's removal comes after days of sparring between The Trump Organization and the hotel's majority owner, a Cypriot businessman named Orestes Fintiklis.

"Today, this dispute has been settled by the judges and the authorities of this country," Fintiklis said from the hotel's lobby on Monday, according The Washington Post. He described the conflict as "purely commercial dispute that just spun out of control."

For nearly two weeks, Fintiklis had publicly attempted to gain and exert physical control of the building, though he had reportedly been campaigning for the hotel's rebranding for months. The material building is owned by several different shareholders, including Fintiklis, but has long been managed by the Trump Organization. As Splinter explains, once Fintiklis purchased a majority share, which was finalized last year, he began complaining about what he considered to be the Trump Organization's mismanagement of the property. He has attributed the company's control to decreased revenue overall.

Late in February, that previously quiet dispute broke out into the public arena when all-out control of the property became the focal point for the disagreement.

At times, the battle for control of the hotel was rowdy enough to draw the attention of law enforcement. In particular, on Thursday, Feb. 23, Fintiklis showed up at the hotel and attempted to fire staff members, who didn't take the sudden ouster very smoothly. Those employees he tried to terminate refused to leave, and when the police arrived, they didn't allow Fintiklis to kick the staff members out. Allegedly, someone on Fintiklis' side of the argument shut power off in the building during the dispute, though it was later turned back on.

Though it isn't immediately clear to what extent a longterm legal battle for control of the property is in store, if Monday's developments are any indication, the day-to-day conflict has begun to simmer down. The Post reports that on Monday a Panamanian legal official visited the hotel, flanked by 15 police officers.

When the official exited, Fintiklis announced that he had succeeded in his campaign to kick out Trump Organization employees. Shortly thereafter, a hotel worker began to pry Trump's name from the property.

Fintiklis, who has developed a reputation for theatrics, reportedly sat down at a piano in the hotel's lobby and began to celebrate his win by playing a Greek anti-fascist song. He has sat at the piano and played music several times over the course of the dispute.

Though Fintiklis told reporters that he had won the battle, the Trump Organization told The Post in a statement that control of the property had simply been transferred to a third party. "To date, there has been absolutely no determination whatsoever by any court or other tribunal as to the status" of the hotel, they said.

Video footage of Trump's name being physically removed from the property garnered much attention on social media. "I need this playing on a loop," said user @wotriler.

"Can't wait to see this happen at Whitehouse!" said another user, @oceansoul41. One user described the news as "oddly satisfying."

Many others expressed similar sentiments. "Wish we could chisel him out of the [White House]," responded @SheRev.

Though Trump no longer personally controls his hotels, having announced he would give that up during his tenure in the White House, he still owns the company. His sons, Donald Trump Jr. and Eric Trump, took over day-to-day management of the Trump Organization after the president's withdrawal.

The hotel in Panama is reportedly the Trump Organization's only property in Latin America.