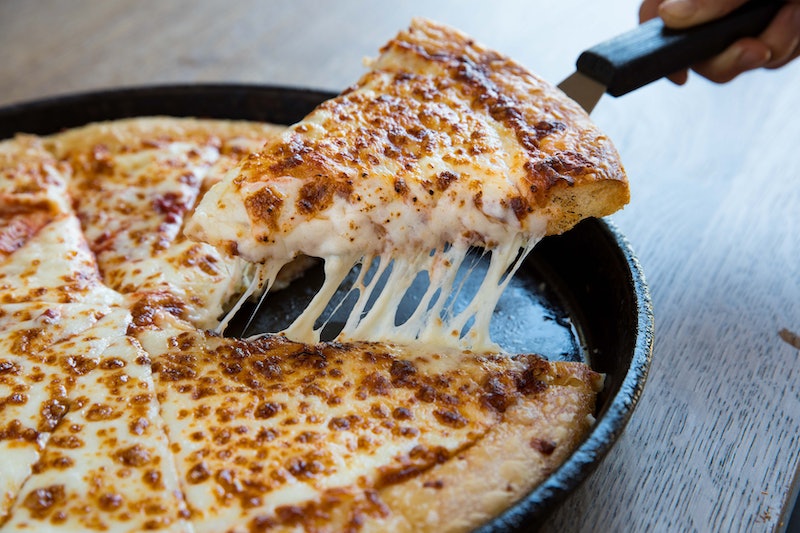 Deciding how much pizza to order for a group can get annoying real fast. If you're the one placing the order, it's best to just decide on your own without even asking for opinions, and this viral tweet about pizza math can help. As noted in a post by Pure Wow, the tweet shared by Fermat's Library shows that two pizzas are not always better than one. Unless you have some toppings-related disputes going on. The tweet and its accompanying graphic do not help with that.

The comments to the post range from discussions about what this means for the amount of crust:

To Big Pizza keeping this a secret:

To life lessons for children:

Of course, none of this is really a secret and anyone can do the math at any time, but pizza places do love two medium pizza deals, and it could be saving them money by subliminally tricking customers into thinking they're getting more pizza. As explained in a 2016 post on Life Hacker, "an 8" pizza has around 50 square inches of pizza content ... a 16" pizza isn’t double the amount of pizza, like we might instinctively think. It’s actually four times as much, with 200 square inches of pizza. Yet you almost never find a pizza place where a small 8" pizza is four times cheaper than a large 16" pizza."

As stated above, none of this helps if the people in your group are in total disagreement about what toppings to get. But, if you can be divided into two factions — pineapple and pepperoni, for instance — you could order an 18 inch pizza with half pineapple and half pepperoni instead of two 12 inch pizzas with one topping on each. That said, this greatly decreases the amount of slices, and really, who among us won't be tricked into thinking we ate more pizza if we have two smaller slices rather than one big slice.

This viral tweet is definitely helpful for anyone who hasn't thought about math as it applies to pizza before. Just make sure you keep your calculator on hand the next time you place an order online or go out to pick up a pie. Pizzerias have different sizes they use for their pizzas and you need to be prepared.