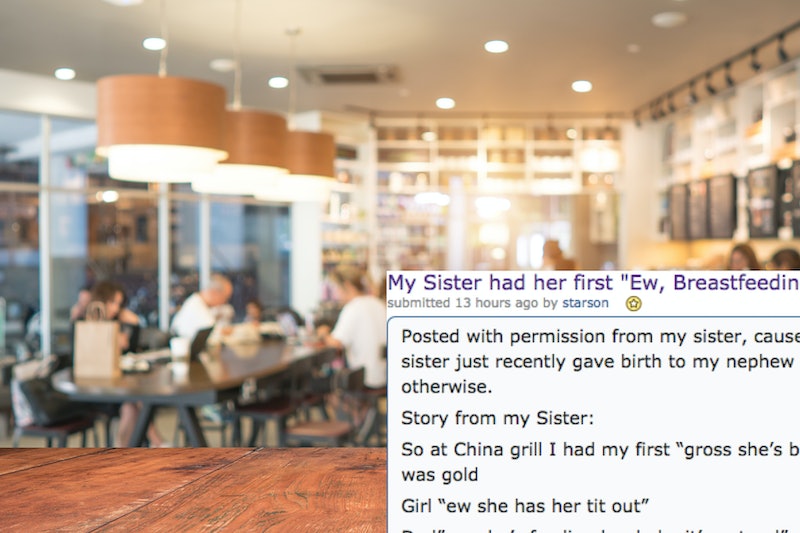 And today in things that will warm even the coldest of hearts, we have this: A story recently posted to the r/TwoXChromosome subreddit about a dad’s response to his daughter shaming a breastfeeding parent is everything. Posted by Redditor u/starsonwith their sister’s permission — because “she doesn’t Reddit and the world deserves to hear this” (dang right it does) — the story tells of what happened when a mother was shamed for breastfeeding in public and someone else stood up for her. But it’s not just a story about supporting this specific breastfeeding parent (although obviously that’s worth it in and of itself); it’s also a story about concrete steps we can take to normalize breastfeeding and chestfeeding moving forward. Because normalizing it for the future generations is how you start the paradigm shift we so desperately need when it comes to how we view chestfeeding.

According to u/starson’s sister, she was feeding her newborn son (who u/starson described as “the world's cutest little boy and I will fight you if you say otherwise”) at a restaurant when a 12-year-old girl sitting at a nearby table with her father commented, “Ew, she has her tit out.” Her dad, however, explained that breastfeeding isn’t an “ew”-worthy action. “No, she’s feeding her baby, it’s natural,” he said in response. The girl then said, “Can’t she do it somewhere like the bathroom?” — but Dad had a reply for that one, too: “Sure she can. You go eat your dinner [in] your bathroom, too.”

Nor was that all he had to say. “Actually,” he continued, “maybe she shouldn’t feed her baby at all, just like I shouldn’t be feeding a rude little girl.”

Then, wrote u/starson, he actually picked up his daughter’s plate and “looked her dead in the eye” for the next bit. “That right there is the most natural, beautiful thing as a mother,” he told her. “Your momma fed you that way, someday you will feed your baby that way and someone will say it’s gross and it’ll hurt your feelings. That little baby wants to eat, and if you want to eat, you will not be thinking such rude things again. I raised you better.”

“She slumped in her seat and huffed. He wouldn’t give herher plate back ‘til she changed her attitude,” wrote you u/starson. “Random Dad, you officially win, and I’m only sorry I wasn’t there to make your meal on me,” they concluded.

According to the National Conference of State Legislatures, it is legal — as in, there are laws that spell this out flatly — to breastfeed or chestfeed in any public or private location in 49 states, the District of Columbia, and the Virgin Islands. (For the curious, Idaho is the only state that doesn’t currently have these kinds of laws.) Additionally, breastfeeding is exempt from public indecency laws in 29 states, the District, and the Virgin Islands. And yet, breastfeeding parents are often shamed for feeding their babies in public — and frequently, it's because of our own misplaced shame surrounding breasts.

The discomfort of others tends to center around the fact that our culture views breasts as inherently sexual — even though they’re, y’know,not. They can be; but, like many parts of our bodies, breasts can have more than one function — and one of those major functions is to feed babies. And that’s what’s so problematic about shaming breastfeeding parents: It places more value on our culture’s puritanical views of sex than it does on a baby’s need to eat. That is, in short, not OK.

Theoretically, we’ve been making progress in terms of how we view breastfeeding and chestfeeding in public; in 2001, one study found that only 43 percent of U.S. adults believed that parents should have the right to breastfeed their babies in public, while the 2015 edition of the CDC’s HealthStyles survey found that almost 64 percent of people agree with the statement “I believe women should have the right to breastfeed in public places.”

But in practice, breastfeeding parents often come up against people telling them not to feed their babies in public — and what’s more, they’re frequently told to go to the bathroom to breastfeed. Just look at the sheer number of stories that have gone viral in recent years of people who have been told that if they want to breastfeed, chestfeed, or pump in a specific public place, they’re going to have to do it in the bathroom.

In fact, that’s the point that the dad in this Reddit anecdote truly nailed: Not only is it not OK to shame someone for breastfeeding, but moreover, it’s also not OK to insist that someone feed their baby in the bathroom. Would you want to sit down with your lunch in a bathroom? No? Would you be offended if someone told you that that was the only place you were allowed to eat? Yes? Well, the same goes for babies. Need a visual? This photo project should help explain the whole thing. This one, too. Breastfeeding isn’t gross; eating in a bathroom is. And it’s high time we stopped thinking that it’s OK to force a baby to eat in a bathroom.

And, as this dad demonstrates, making that change inthinking stick starts with teaching it to kids. Will the girl in the story retain this lesson? If she hears it reinforced, hopefully she will. And maybe she’ll teach her friends the same thing. And, as she gets older, maybe she’ll teach it to the next generation of kids, too. And on, and on, and on, until parents breastfeeding their kids in public is seen as exactly what it is: Just a regular part of parenting.

Because having a supportive environment for breastfeeding and chestfeeding matters. All you need to do is look to some of the other stories being told in that Reddit thread to see how true that is. One person told of witnessing a mother being shamed by her seatmate for breastfeeding on an airplane — only to have another woman behind her tell the man doing the shaming that she would switch seats with him. Said the woman to the mother, “The child shouldn’t be around idiots at such a young age. Never let anyone tell you how to raise your child.” A parent elsewhere in the thread spoke of how differently breastfeeding is perceived in the United States than in other countries they had lived in — in Germany, “people didn’t even look twice” when they breastfed; in Turkey, complete strangers were “ecstatic”when they found out the parent was breastfeeding; but in the United States, people mostly “stared” or “complained.” One female Redditor who was sitting in the atrium of their university wrote about a woman who came in with her baby and, despite lots of other open seating being available, sat down near her and began to breastfeed — only realizing afterwards that “she chose to sit with me as a sort of buffer against being harassed.” Wrote the Reditor, “No one said anything, but clearly she was worried about someone saying something negative.”

To be clear, there is nothing wrong with bottle or formula feeding; breastfeeding isn’t always an option for every parent or child, and that's fine. But the stigma surrounding breastfeeding and chestfeeding in public has got to go. It's hard enough as it is. There’s no need to make it any harder .