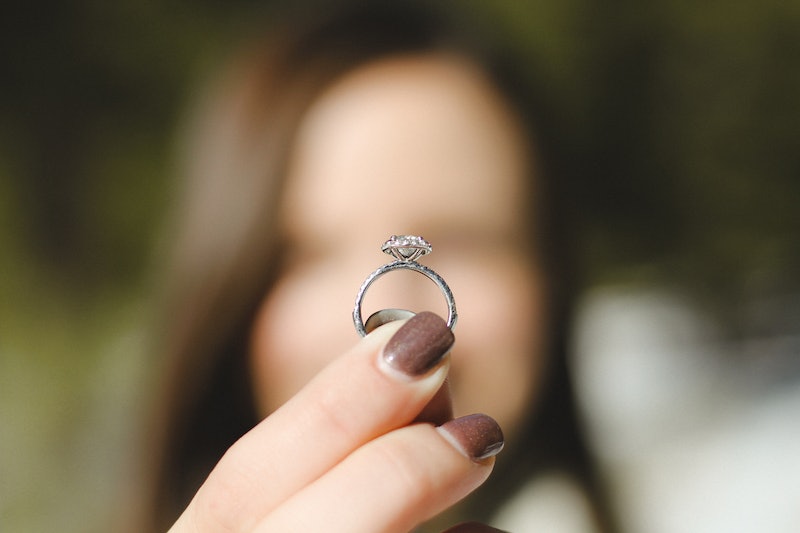 Imagine the most beautiful, emotional and Insta-worthy moment of your life to date: your wedding day. Now, imagine that right after the first dance or epic "cutting the cake" portion of the ceremony your best friend decides this is the opportune time to get down on one knee to propose to their partner — at your wedding. You want to be happy for them, yes! But why did they have to pick your moment? This is the same question a Slate reader had for Mallory Otberg or "Dear Prudence," only somehow, the timing of this proposer managed to be even worse.

The anonymous question to Otberg read:

My husband and I started dating, got pregnant, had a child, moved in together, bought a house, and got a dog in that order. Our friends and family have asked us for years why we weren’t married yet. We always pushed it off to build better lives. We’ve done really well for ourselves and finally reached a point where we could afford a huge blowout wedding to celebrate our lives with everyone we know and love. My husband’s best friend, “John,” was the best man/officiant. The setting was beautiful, everyone seemed happy, our families were overjoyed. My mom may have used the phrase hallelujah a few dozen times. The entire atmosphere felt moving. So moving in fact that John stopped mid ceremony to propose to his longtime girlfriend, “Jane,” and reveal her pregnancy.

If you're thinking, well, why not? They are a friend that might be borderline family. Of course you'd want to be happy for them! But to be honest, imagining this scenario sounds a little like a nightmare. Think about it. You pump all of the time, energy, and money into an event worthy of Pinterest. You have multiple bridezilla moment, and maybe even she a few tears trying to get just the right color fuchsia for the table runners, and BAM! All of that doesn't really seem to matter anymore because you've been upstaged. And if you can imagine how that feels, you don't have to. This anon letter shared just how earth shattering it can be.

I couldn’t even hear the vows my husband wrote or the rest of the ceremony over the noise of Jane’s happy sobs, her very surprised family who were also guests, and people seated nearby congratulating her.

Prudence responded, justifying the way most of us would react — with the anger and bravado of a Disney villain.

I think it merits a fight! In between “getting over it” and “never speaking to John again” is the happy medium of “having a difficult conversation with a longtime friend who did something selfish and self-absorbed on your wedding day.” He’s your husband’s best friend, so your husband should tell John just how upset his behavior during your wedding made him. Maybe John will apologize and the two of them can have a meaningful reconciliation and build a better friendship as a result.

Social media has an interesting way of bringing people together, and by that, I mean getting you all worked about real life and hypothetical scenarios. It's safe to say that Twitter wasn't having it when the question was presented again elsewhere: Is it OK to have a friend propose at your wedding?

Another controversial photo was posted quite a while ago by @bellanaijaweddings, but originally captured by photographer Akintayotimi. Both social media accounts are dedicated to celebrating African culture and the extravagant beauty of tying the knot. Even after being posted on Facebook three years ago, it managed to gain over 100 comments. After being reposted on Twitter, fate would have it so that the photo would go viral again. And people started to lose it, again!

So, clearly, this also wasn't the inspiring moment it was intended to be. Not even a little.

If you've ever thought about this as the ultimate gesture of love. Think again! This might get you escorted out, according to some tweeters.

Or worse...the bride and/or groom might cause a scene that would remind you more of any reality TV show on VH1.

Apparently, there is little to no middle ground. But there were some willing to make an exception.

But if you didn't get the memo, written in large sharpie marker on the wedding invites or prepare to risk it all for a moment.

And finally, it's time to weigh the cost. If a friend/relative feels slighted after your brief moment of social media fame, just imagine what could happen at your wedding.

If that wasn't enough to scare you away from making a potentially egregious error, there are other methods to fool proof this approach. First, you should always ask beforehand. Don't surprise your family, friends, the bride and social media with your selfishness. You've been warned.

Read the rest of the Dear Prudence story and response here.