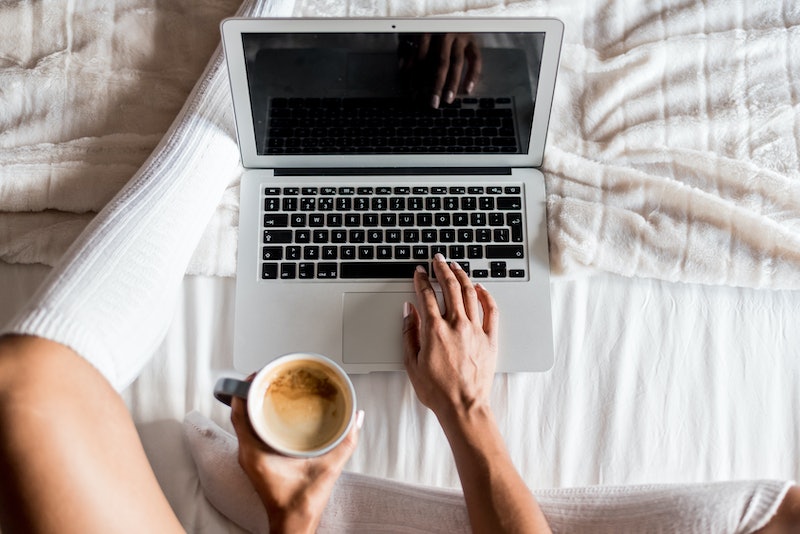 Despite STI rates rising, more and more Americans than ever are putting off health care. The virtual health clinic Biem wants to change that. The iPhone and Android app let you talk to heath care providers, view your test results, and even get tested for STIs without having to leave your home.

CEO and Co-Founder Bryan Stacy became passionate about sexual health after being diagnosed with testicular cancer and chlamydia. Despite the pain in his left testicle, he put off a doctor's appointment due to fear and embarrassment. He doesn't want anyone else to do that. "Sexual health anxiety is universal, yet never talked about, especially when it comes to STDs," he tells Bustle. "With each step in this process, we sought to eliminate fear and inconvenience and reward action."

When you sign up for Biem (which is currently only available in New York but plans to expand), you can video chat with one of several doctors the company selected to create a judgement-free experience for $45. Then, you can either go get tested for STIs at a clinic (free under most insurance plans) or get a healthcare provider sent to your home for another $45, and Biem will display the results after 2-3 days. You can even set up the app so that partners who use it get notifications if you test positive, and vice versa.

"We found that people who get tested and can prove it are 90 percent more likely to ask their partner if they’ve been tested."

"We found that people who get tested and can prove it are 90 percent more likely to ask their partner if they’ve been tested," says Stacy. "This is how we stop the STD epidemic and bust the stigmas that prevent people from taking care of the their sexual health."

Despite the fact that STIs have reached an all-time high, many people still aren't getting tested. A 2016 study in the Journal of Adolescent Health found that only 11.5 percent of people ages 15-25 had been tested over the past year. The reason people aren't getting tested is probably a combination of inconvenience, "it couldn't happen to me" logic, and the stigma associated with STIs. A 2015 MedExpress survey found that two thirds of people would lie to their partners if they had an STI, and this same kind of shame could also make people scared of seeing a healthcare provider.

That's where Biem comes in: to give people who would otherwise be too scared or busy the information and services they need to take care of themselves. And hopefully, by encouraging people to think and talk about their sexual health, resources like this can also bring us closer to a day when people aren't too embarrassed to go to the doctor.

More like this
This Company Will Send STI Tests Right To Your Door
By Lexi Inks
Are Sagittarius & Sagittarius A Good Match? Astrologers Weigh In
By Kristine Fellizar
Bumble's "Compliments" Feature Lets You Message Before You Match
By Lexi Inks
Are Capricorn & Capricorn Compatible In A Relationship? Astrologers Weigh In
By Kristine Fellizar
Get Even More From Bustle — Sign Up For The Newsletter