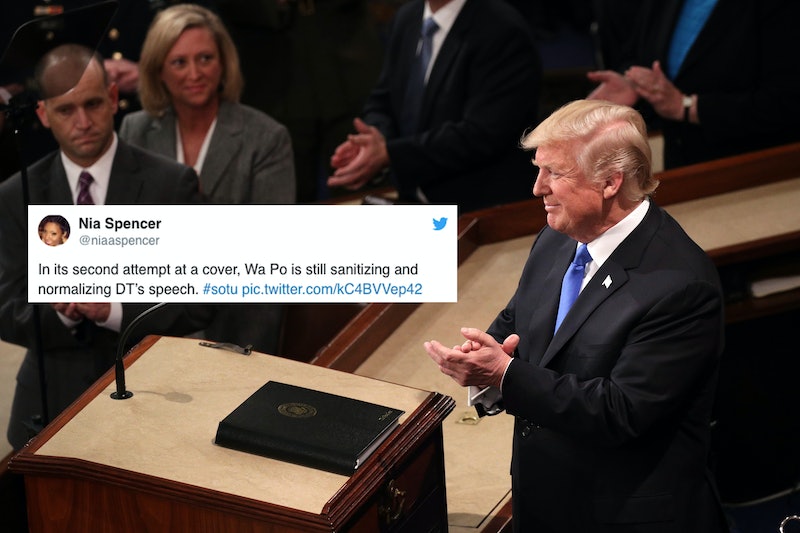 As Americans prepared to hear President Trump deliver his State of the Union address on Tuesday, many also braced themselves for the media reaction that would follow. Some liberal commentators predicted that his words would be judged more charitably than they deserved because the bar is set so low for Trump. And sure enough, many found their worries confirmed in The Washington Post's front-page headline about the State of the Union address.

"A call for bipartisanship," read the Post's original headline, which was posted on Twitter shortly after Trump's speech concluded. The Post's followers immediately jumped on the tweet, decrying the idea that the president had offered a bipartisan message when his words about immigration had focused on the alleged crimes of the MS-13 gang, his gesture to Dreamers had invalidated their status ("Americans are dreamers, too," he said, earning the praise of former KKK leader David Duke praised on Twitter) and he'd used polarizing language, including calling the Affordable Care Act "disastrous."

Less than an hour after the Post announced the headline, it retweeted an updated version that used a quote from Trump's speech: "A 'new American moment.'" Progressive Twitter users didn't like that much better, while conservatives accused the Post of caving to liberal demands.

Both headlines contrast with the reaction written by the Post's editorial board, which was deeply critical of Trump's speech and argued against the idea that it had a unifying message. "Mr. Trump could not avoid, even for an hour, lacing his address with divisive references to hot-button issues and graceless attacks on his predecessors," the board wrote. And as for the milder parts of his address: "Have a president’s words ever rung more hollow?"

The Post published many additional op-ed responses that ranged from extremely disapproving to highly complimentary. Dana Milbank, for instance, wrote that Trump's State of the Union was "uniquely depressing." Marc A. Thiessen, on the other hand, heaped on the praise. He said that Trump's decision to begin his address with anecdotes about heroic guests in the audience was "brilliant" and wrote that "His speech was moving. It was reasonable. It was bipartisan. And it worked."

The social media ire mostly focused on the Post's front-page headline, though, as opposed to its editorial section. Here's what some had to say.

Trump shared the story of two teenage girls, Kayla Cuevas and Nisa Mickens, who were reportedly murdered by members of the MS-13 gang in 2016. "Many of these gang members took advantage of glaring loopholes in our laws to enter the country as unaccompanied alien minors," he said, "and wound up in Kayla and Nisa's high school."

Bringing In The Statistics Guy

Sure, his reputation was damaged a bit by incorrect 2016 election predictions, but Nate Silver is still seen as one of the most authoritative political voices of our current moment.

Why It Matters Beyond This Headline

This is just the latest of many times that the Post, along with most mainstream media outlets, has been accused of normalizing Trump.

The New York Daily News follows very different protocols than the Post and has divergent goals, but hey, maybe it could still teach the Post some lessons.

Right, save that for the Daily News.

Calling Out The Times, Too

Its its article titled "First Trump State of the Union Address Makes Appeal for Unity," the Times wrote that the president's speech included frequent calls to bipartisanship and that he "dared Democrats to reject what he called a 'down-the-middle compromise' on immigration."

Hillary Clinton used this phrase in a speech she gave in 2010 while she was Secretary of State.

About That Potential Plagiarism

Melania was accused of plagiarizing Michelle Obama in her speech at the 2016 Republican National Convention.

Second Time's (Not) The Charm

It should be said that it's somewhat normal for a newspaper to change its headline prior to publication.

How're you feeling? Any regrets today?