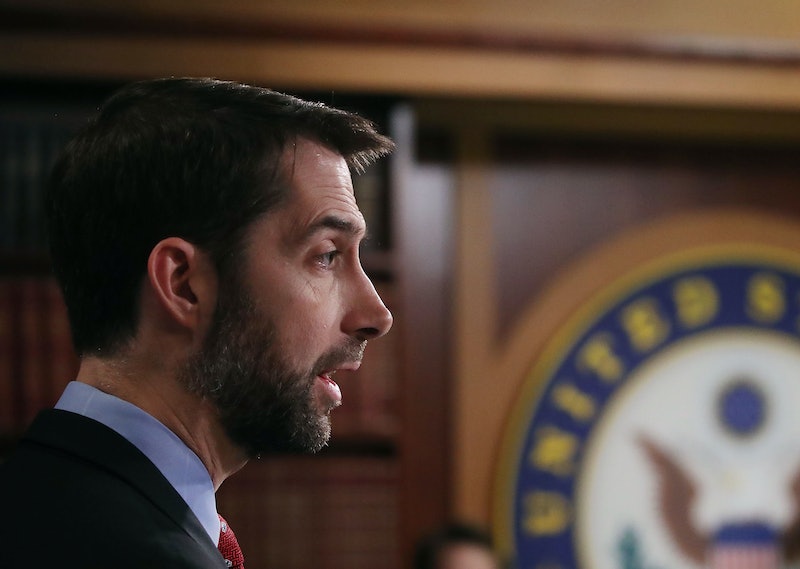 It appears that Arkansas Sen. Tom Cotton is the latest Republican to feel the ire of his constituency. Reports from Cotton's town hall meeting in Springdale, Arkansas, revealed that many of his voters are angry at the job he and his Republican colleagues have done in Congress, and clearly have no qualms with expressing that anger publicly. But it was this this one question that a woman asked Sen. Cotton about healthcare that truly drove the point home that this headline-grabbing town hall is about so much more than disgruntled voters.

During the town hall meeting, a woman stood up and informed her senator and the assembled crowd that her husband was at home dying, and that they could not afford health insurance without the aid of the Affordable Care Act. She went on to ask Cotton what kind of insurance he has, which elicited applause and cheers from the crowd. Prior to asking the question of the night, this voter also criticized the notion that the angry constituents should be calm and collected in the face of such injustice as the potential rise in healthcare costs for her family. She also chastised him, saying that she's reached out to him to speak about this multiple times, only to be ignored.

The emotional and moving speech was captured on camera by CNN, and has already garnered thousands of likes and retweets.

This Arkansas voter's question highlights a very real concern about Congress deciding what to do with the Affordable Care Act — that people who are likely much wealthier than their constituents get to decide what happens to a government-assisted insurance program that helps the otherwise uninsured.

Ironically, many Congress members are also insured via the ACA. In 2015, there were nearly 13,000 members of Congress and their staff enrolled in the "gold" level coverage with D.C. Health Link, the district's response to the ACA. The levels are broken down into categories that correspond to metals, and the "gold" coverage is the second-best insurance D.C. Health Link offers.

It seems pretty hypocritical that many Congress members, which could include Sen. Cotton, get their incredibly comprehensive insurance through the ACA while congressional Republicans work to repeal it. If they are successful, they will likely return to the Federal Employees Health Benefits Program, which covered Congress members before the ACA required that they enroll in the program.

To his credit, Cotton lobbied his fellow Republicans against repealing the ACA without a replacement in place. Unfortunately, he is in the minority among his fellow GOP senators and representatives in advocating that method. His constituent's angry remarks may have fallen on sympathetic ears in Arkansas, but her words need to be heard by her senator's colleagues as well.

The American healthcare crisis that created the need for the ACA will only get worse with its repeal unless Cotton is successful in warning his colleagues that a comprehensive replacement will go into effect in its place.