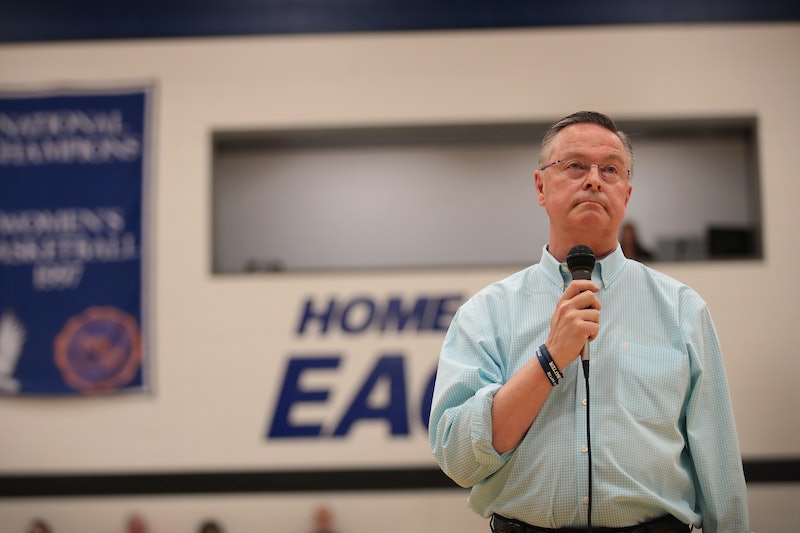 On May 8, Iowa Congressman Rod Blum held a town hall meeting in which he questioned why a 62-year-old man should have to contribute to pregnancy insurance. Retired special-education teacher Barbara Rank had an answer for him. The Iowa woman's explanation for why men should pay for maternity care has gone viral online, with thousands of people cheering for her succinct description of how basic civil society works.

In the May 8 town hall meeting, Blum, a Republican, discussed why he voted for the American Health Care Act (AHCA), which repeals Obamacare. He said that the AHCA does away with “some of these crazy regulations that Obamacare puts in … such as a 62-year-old male having to have pregnancy insurance.” Blum’s attitude is nothing new; back in March, Illinois Rep. John Shimkus expressed bafflement at the idea that men should be required to pay for insurance that covers prenatal care.

To be clear, Obamacare does not require that men pay for pregnancy insurance policies. It requires that all insurance policies cover certain essential health benefits, including maternity care, as well as emergency services, prescription drugs, mental health care, and a number of other basic services. Under the new health care bill, states will be able to seek waivers that would allow insurance plans not to cover these essential health benefits.

Barbara Rank attended Blum’s town hall, and told the Telegraph Herald that she was “appalled” by what she heard. “It’s not the first time that I’ve heard that argument, but the fact that he would just say it in front of 1,000 people got me boiling,” she said. So she wrote a letter to the editor:

Congressman Rod Blum in a Dubuque town hall (Monday) night asked, “Why should a 62-year-old man have to pay for maternity care?”

I ask, why should I pay for a bridge I don’t cross, a sidewalk I don’t walk on, a library book I don’t read?

Why should I pay for a flower I won’t smell, a park I don’t visit, or art I can’t appreciate? Why should I pay the salaries of politicians I didn’t vote for, a tax cut that doesn’t affect me, or a loophole I can’t take advantage of?

It’s called democracy, a civil society, the greater good. That’s what we pay for.

John Ferland, a spokesperson for Blum, responded to the controversy stirred by Blum’s remarks. “He was referring to the idea of patients being able to choose health insurance policies that fit their needs, rather than one-size-fits-all policies filled with government mandates,” he told the Telegraph Herald. “Obviously, he understands that taxes pay for things that not everybody uses.”

Rank was surprised by how popular her letter to the editor has become. “What the heck, I just wrote this silly little letter and look what in the world has happened,” she told the Telegraph Herald. Her story is a good reminder that speaking up for what you believe in can have a much greater impact than you might expect.

More like this
10 Times Boris Johnson Got It Wrong On Trans Rights
By El Hunt and Sam Ramsden
How To Protect Your Digital Privacy If You Need An Abortion Post Roe v. Wade
By Kaitlyn Wylde
How The City Healed Five Years On From The Manchester Arena Attack
By Ella Glover
Harry Styles Called For "Backlash" In Powerful Statement On Abortion Rights
By El Hunt
Get Even More From Bustle — Sign Up For The Newsletter