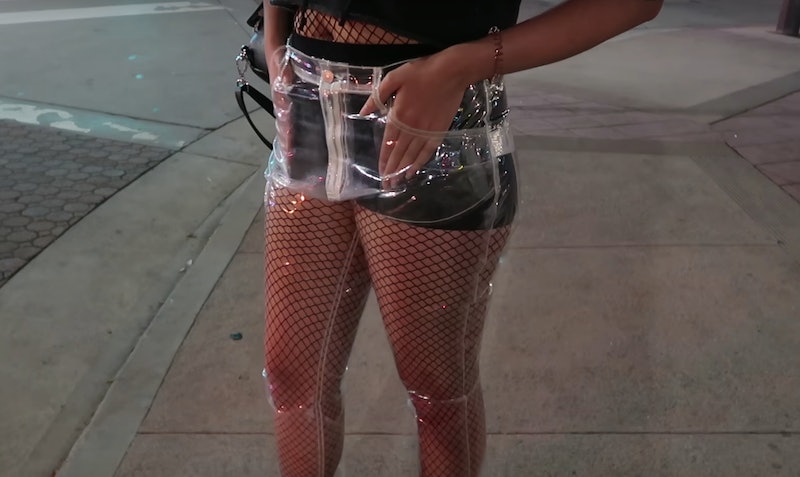 Remember those see-through pants that made you ask, "who would ever wear these?" Well, it turns out that there is at least one person who added them to their closet. Former BuzzFeed writer and now-YouTuber Safiya Nygaard wore Topshop's clear "jeans" for a week. She gave the low-down on the highs and lows of this trend, and you might just want to buy a pair after you see them in action.

There are tons of interesting denim trends popping up recently, but this whole clear pants trend might just be the weirdest yet. Topshop, who started off with their Clear Knee Mom Jeans, decided to commit fully to the futuristic look by selling see-through pants. Nygaard, who also tried the clear-knee look, decided to put the Topshop creation to the test for a week. The good news is that she survived. The bad news is that she had to wear clear pants for a week.

The YouTuber started out by styling the pants just like the model on the TopShop website — with shorts and a t-shirt. Throughout the week, she got a little more bold with her looks by adding leggings and fishnet stockings underneath. To be completely honest, these actually looked pretty cool.

According to the video, the major downfalls were the condensation issue and the sound. The squeaky sound of these pants broke 80 decibels, Nygaard found out through an app, which is actually as loud as a garbage disposal. Oh, and her cat would run away from her every time she got close.

There's also the fact that they're $60. That's a lot of money for pants that you can't even wear on their own, if you ask me. As of May 11, they're currently sold out on the TopShop website, so maybe they're more popular than people think.

There were some perks to the pants though. First off, they look pretty cool when layered with something underneath them. They repelled the smoothie and mustard that was spilled on them with ease, which is a major bonus as well. Nygaard also took them swimming, and, although they didn't work the best in the pool, she found that people thought they were pretty cool when paired with a bathing suit.

All in all, people didn't hate this pants as much IRL as the internet made it seem. Nygaard mentions throughout her YouTube video that some people really loved the pants. This could just be the future of fashion, my friends. What a time to be alive!

More like this
Kim Kardashian Just Wore A Latex Bra Top For Miami Art Basel
By Dominique Norman
20 Glamorous Holiday Party Outfits That Give *Opulence*
By Dominique Norman
Kendall Jenner Wore A $38 Sweater & Sports Bra For A Chic Workout Fit
By Allie Fasanella
4 Chic Outfits To Wear With Loafers, According To A Fashion Editor
By Bella Gerard
Get Even More From Bustle — Sign Up For The Newsletter