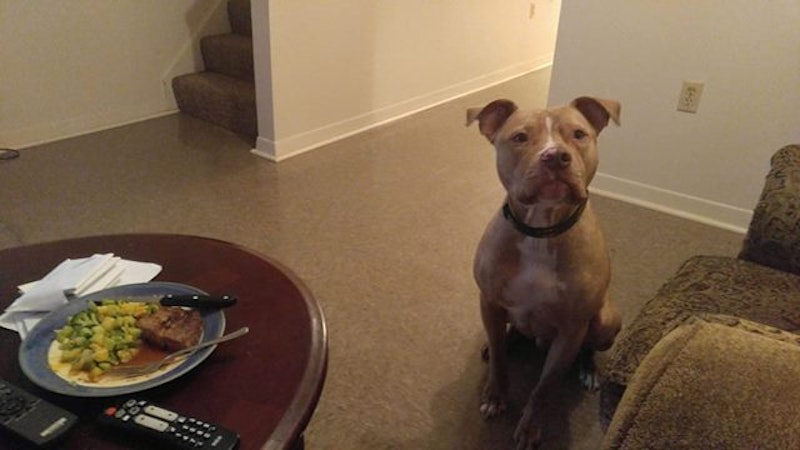 Unfortunately, victim-blaming is so pervasive and cuttingly subtle that people may not even realize they're doing it. When someone reports an assault, particularly one of a sexual nature, even people closest to the victim can't help but ask for details like What were you wearing? and Had you been drinking? While these questions may be asked out of concern, they also contribute to a toxic narrative of shifting the blame from the perpetrators to the victim — a narrative that this woman cleanly shut down, with a viral image that explained the ridiculousness of victim-blaming, and the culture surrounding it.

The unexpected bonus is that this mic drop message also comes with an adorable dog; 22-year-old Bree Wiseman posted an image of said dog on Facebook, where he was perched next to the delicious steak meal that she was enjoying. The caption of the image was simple, and cut straight to a point that, unfortunately, advocates have struggled to make people understand for years: "To the people that say women get raped due to the way they are dressed. This is my dog. His favorite food is steak. He is eye level with my plate. He won't get any closer because I told him no. If a dog is better behaved than you are, you need to reevaluate your life."

Wiseman told HuffPost that she was inspired to make the post from her own experiences with sexual assault, elaborating, "The only person to blame in a rape offense is the rapist. It was their decision to rape. People shouldn’t have to worry about what they chose to wear for fear of rape. I want people to see that this is a problem, and to stand together against victim-shaming.”

While this post excellently illustrates the illogic of victim-blaming, it also opens up a much broader (and, frankly terrifying) conversation of the effects of victim-blaming. Questions like this frequently used to discredit victims in trials, contributing to the release of people who commit sexual assault and, in turn, creating the idea that people can commit these acts without facing the appropriate consequences. And in a lot of cases, victim-blaming stops the victim from coming forward in the first place; according to RAINN, 31 percent of rape cases go unreported to the police. In a study by the Maryland Coalition Against Sexual Assault, which sought to understand why victims didn't report their assaults, among the reasons were "not enough proof" and "belief that the police would not do anything to help"; and with the pervasiveness of victim-blaming in and out of the justice system, it is upsettingly easy to understand what may have led victims to those beliefs. In the end, victim-blaming is cyclical — the crime doesn't get reported, the crime isn't punished, and the crime gets repeated, all because of the misplaced shame and burden we put on victims to be held accountable for something that happened to them out of their own control.

Fortunately, the more people like Wiseman initiate conversations like this to help shift the blame where it belongs, the closer to we get to ending that cycle for good — one mic drop of a viral post at a time.

More like this
25 Inspiring Quotes From Black Women To Celebrate Black History Month
By Kyli Rodriguez-Cayro and JR Thorpe
24 History-Making Black Women You Probably Didn't Learn About In School
By Ayana Lage and JR Thorpe
6 Organizations Fighting Police Brutality That You Can Support Right Now
By Syeda Khaula Saad and JR Thorpe
These Artists Are Reimagining Black History Month To Create A Better Future
By Katie Mitchell
Get Even More From Bustle — Sign Up For The Newsletter
From hair trends to relationship advice, our daily newsletter has everything you need to sound like a person who’s on TikTok, even if you aren’t.