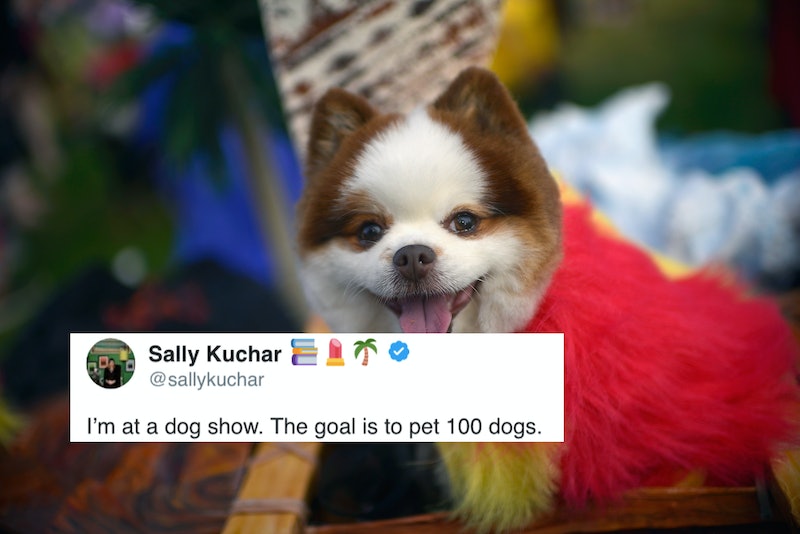 Sometimes a hero comes along. With the strength to carry on. And they cast their fears aside — and pet 100 dogs over the course of a single dog show. It all started when Sally Kuchar arrived at the Golden Gate Kennel Dog Show. This particular type of dog show is known as a bench show, where the dogs are available to meet and, well, pet when they're not showing. In other word, it sounds like a puppy paradise.

"Folks are encouraged to walk around and familiarize themselves with the breeds, and petting is very, very encouraged," Kuchar told Mashable. That was an encouragement that she took very, very seriously. She decided that she would make it her own person journey to put not just a few dogs, not just many dogs, but 100 dogs. And she documented the whole thing on Twitter and Instagram, where people were obsessed not just with her determination, but the range of furry friends who she made at the dog show. From big and hairy to little and yipping, there was definitely something for everyone. Some dogs were really into getting a little love and attention from Kuchar, while others could not have given any fewer effs about the petting or challenge at hand. Still she persisted.

For the most part, the dog owners seemed to be happy bunch who were pretty used to their dogs getting a lot of attention, but one woman may have been a little weirded out by Kuchar's undaunted determination to pet all of the dogs. "I was having a great conversation with a bulldog's owner and did let her know that I was trying to pet 100 dogs," she told Mashable. "She looked at me quizzically and changed the subject." You can't win them all.

Though she did win the challenge, successfully documenting and petting all 100 dogs. She told Mashable that she liked doing public challenges because they hold her accountable — but, as far as things to be held accountable to, I have to say that going on a puppy petting spree sounds like a pretty great option. In fact, unless you scored that sweet job getting paid $100 an hour to pay with puppies — a genuine real thing — it sounds about as amazing as 2019 can get.

So if you've been looking to set some short-term goals or find a way to pump yourself into the new year, then Kuchar might be onto something. You could try to force yourself to reach an unattainable body standard, you could try bullet journaling for the 45th time, or you could shower yourself in joy and light and embrace all of the puppies that come your way. It seems like a pretty straightforward choice.

How did Kuchar celebrate her fabulous achievement? Well, lucky doggy number 100 was her own dog, Skippy, a 10-year-old mutt who she's had for eight years. She declared him not only her best friend but also best in show, both of which I'm inclined to agree with.

Getting a pet is a huge decision, so if you're not ready for that then maybe a petting spree will do the trick. Kuchar may have reached petting hero status but, with enough strength and determination, you too can pet 100 puppies — or die trying. Or without the dying part, maybe just focus on petting a lot of puppies. That sounds like a better plan.