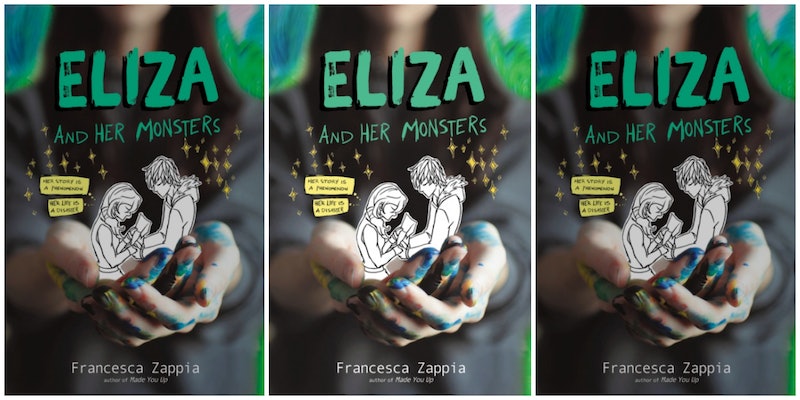 Francesca Zappia's new YA book Eliza and Her Monsters is a wonderfully nerdy story of fandom, anxiety, and companionship. Seventeen-year-old Eliza (online screen name: LadyConstellation) is the anonymous writer of Monstrous Sea, a web comic that has turned into an internet phenomenon. Online, Eliza has tons of friends and fans, but IRL, she's sort of a loner. When a new boy, Wallace, transfers to her school, she finds out that he is a mega-fan of her comic, and even writes fanfiction based on it. The two strike up a friendship built on their shared social anxiety and love of Monstrous Sea, but Eliza doesn't tell him that she is actually LadyConstellation, which definitely leads to some trouble for the new friends.

I loved this novel from beginning to end — but there was one scene in particular that stuck out to me.

In that scene, Eliza and Wallace are sitting in her room, and Wallace asks for a piece of paper to write on. (It's hard for Wallace to talk out loud, especially when he's nervous, so the two often communicate by writing.) He hands the paper to her, and it says, "Can I kiss you?"

Eliza immediately panics, but not because she doesn't like Wallace or doesn't want him to kiss her. She really wants him to kiss her. But the idea of it makes her feel "out of control." She tells him:

Yes, but not right now.

I know it sounds weird. Sorry, I don't think it'll go well if I know it's coming. I will definitely freak out and punch you in the face or scream bloody murder or something like that.

Surprising me with it would probably work better. I am giving you permission to surprise me with a kiss. This is a formal invitation for surprise kisses.

I don't like writing the word "kiss." It makes my skin crawl.

I hope that doesn't make you regret asking.

When Wallace reads her request, he just nods and says, "No regret. I can do surprises." And that's it.

It's an adorable scene, and it's made all the more swoon-worthy by the ways in which it exemplifies how sexy consent can be.

Eliza and Her Monsters by Francesca Zappia, $10, Amazon

First of all, the scene begins with an awesome demonstration of consent: Wallace asks Eliza before he tries to kiss her. This is something that should always happen, but so often (both in fiction and in real life), it doesn't. Perhaps this stems from a misconception that it's sexier if one partner just goes for it. But truthfully, asking beforehand can be very, very sexy — as this scene shows. It's not solely up to Wallace to make a decision on whether he and Eliza should kiss; she determines what happens to her body. And he respects that. No amount of eyelash-fluttering or muscle-flexing can equal the power of respect. (And who wouldn't love being handed a note like that?)

It's also incredibly sexy that Eliza gets to ask for what she wants. Eliza tells Wallace exactly what is within her comfort zone. There can be a lot of pressure, especially for women, to just go along with what your partner does. But talking about what we want (and what we don't want) is an important part of fulfilling relationships. It's the best way to build an intimacy that works for both partners. Keeping that open dialogue ensures that every person always feels comfortable, and that they have the ability to speak up when they don't.

And then, the crucial step is that Wallace listens to her. He doesn't argue, he doesn't try to do it anyway. He respects her decision. He waits. And (spoiler alert) when they ultimately do kiss, it is all the more empowering and all the more exciting because it happens on both of their terms.

Plus, the cherry on top, is that after this whole conversation, everything is fine. They hold hands and keep hanging out. They have a good time. Nothing is awkward. Many times, there is pressure to go with the flow, even if you're uncomfortable, because you don't want to upset your partner or make them think that you don't like them. I've felt it, and I know many other people have. But this is a great demonstration of how expressing your needs doesn't ruin everything in the way that we fear. (In fact, it usually makes things better.)

On that note, I also loved how we get to see Eliza freak out a little bit. Speaking up for what you want (and knowing what you want in the first place) can be really hard. She fears that she'll "like it too much," which speaks a lot about the pressure we feel to fit into the box of what is acceptable when it comes to our sexuality. For me personally, I often feel like everyone has sex figured out except for me, and that I'm a weirdo if I don't act the "right" way in an intimate situation. I'm sure I'm not alone in this. Building a culture of consent also means creating a space in which people know that it is OK to feel uncomfortable, that it is OK to not know what you're doing, and that it is OK to like the things you like.

While this was just one small scene in a seriously fantastic book, the positive message it demonstrated about consent made my heart sing. My hope is that we can continue to create and share stories that exemplify consent culture so that scenes like this can be the norm.

Eliza and Her Monsters by Francesca Zappia, $10, Amazon