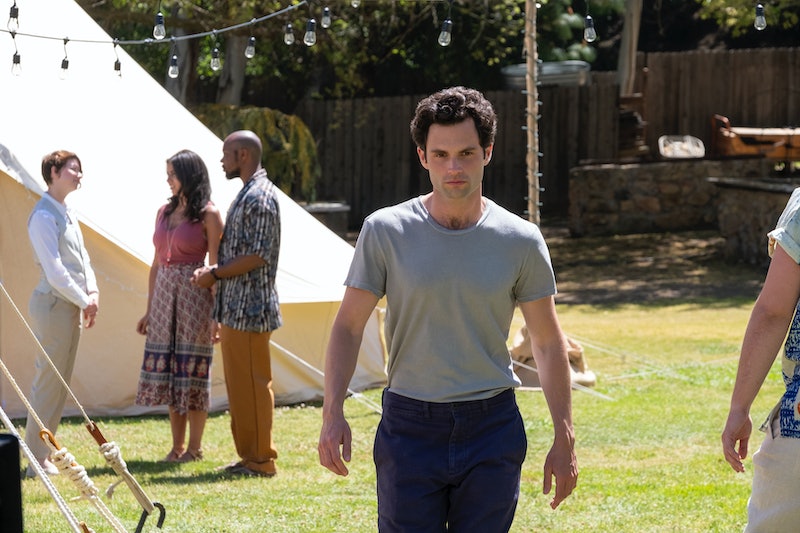 It's a new year, but Joe Goldberg (or should we say Will Bettelheim's) reign stalking has only just begun. On Tuesday, Jan. 14, Netflix announced that YOU has officially been renewed for a third season. And while no official premiere date has been revealed, it news was accompanied by a brief promo to give fans a taste of what's to come. "New Year, New You," the teaser revealed, as posted on the official YOU Twitter account, alongside the caption "See you soon, neighbor. YOU S3 is coming."

Of course, news of the show's renewal shouldn't come as a big surprise, considering the latest cliffhanger that was dropped at the end of Season 2. In the Season 2 finale, after settling down with a very pregnant Love in the Los Angeles suburbs, Joe set his eye on his next obsession: his mysterious neighbor next door. The woman's identity remains unknown, which has prompted a bunch of theories to come out of the woodwork. (Is it his mom? Beck? Someone brand new?) Penn Badgley is keeping what he knows under wraps for the time being — though he did debunk at least one of those popular YOU theories already.

But now that the series has officially been picked up, viewers are guaranteed some answers in the not-too-distant future.

However, just because Joe now has a new target doesn't mean fans won't see the return of some familiar faces. Both Badgley and Victoria Pedretti will return for the 10-episode season to play Joe and Love, respectively, according to TVLine. (Not surprising, considering that Joe is the central character and Love is about to give birth to his very first child.)

Meanwhile, behind the scenes, co-creators Sera Gamble and Greg Berlanti are also on board for the new season and will serve as executive producers once again. In fact, Gamble, who is also the showrunner, has already released a statement about the Season 3 pickup on Twitter, revealing her excitement to dive into the next chapter of Joe's creepy and twisted story.

"Hello, You Season Three," Gamble tweeted. "We are grateful to our partners at @netflix and @warnerbros for the endless support.... and most of all, we are grateful to every one of you freaky voyeurs for watching. See you soon, neighbor."

The past two seasons of YOU have been based on Caroline Kepnes' novels YOU and Hidden Bodies. The author is currently in the process of finishing up her third book in the series, though it remains unclear how closely the show's third season intends to follow its source material.

Either way, Joe's antics are sure to leave viewers on the edge of their seats.

More like this
'Bridgerton' S3 Teases Exciting Social Season For Penelope Featherington
By Bustle
The First Trailer For 'That '90s Show' Includes So Many Nods To The Original Series
By Jack Irvin, Alyssa Lapid and Grace Wehniainen
'Wakanda Forever' Is Already Opening Doors For Mabel Cadena
By Grace Wehniainen
Brandon & Serene Reveal The Major Relationship Milestone They Celebrated After 'BiP'
By Kadin Burnett and Grace Wehniainen
Get Even More From Bustle — Sign Up For The Newsletter