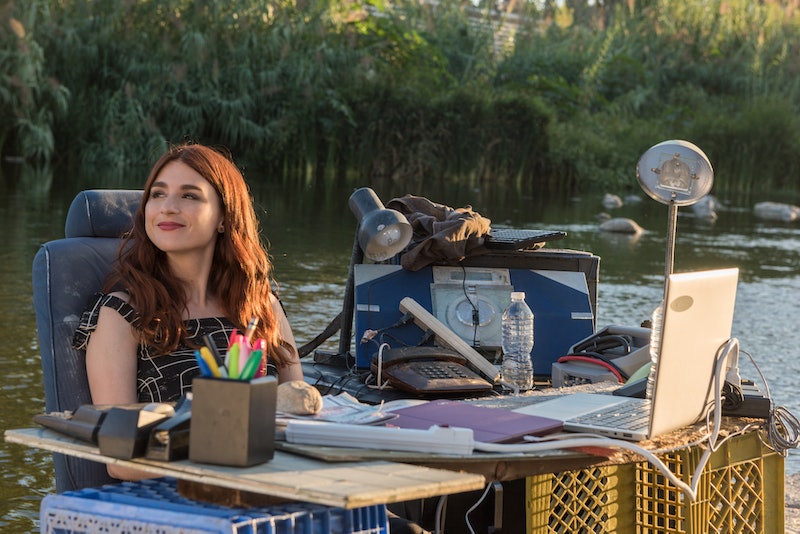 You're The Worst has always been adept at depicting mental health, and as it nears its series finale, it's closing out strong. Though Jimmy has been aware of Gretchen's depression on You're The Worst for several seasons now, he hasn't been the most supportive partner. The March 20 episode shows that this is, at least in part, because he straight-up doesn't get it — but it also highlights one of the most frustrating misconceptions about depression.

In the episode, we learn that Gretchen, after losing her job, has formed a makeshift "office" at a riverbank, where she's been spending the day so that Jimmy still thinks she's gainfully employed. After Edgar catches on to her ruse — and the fact that she's been stealing his medication — Gretchen cries that she's afraid to tell Jimmy because she's afraid he'll abandon her again. "He will leave me again, and this time he won't be wrong to do it," she sobs. "I was really trying at work, and I still blew it. Even when I try, I fail. I always fail. And I can't fail with Jimmy. I just can't."

It's a rare moment of emotional honesty, and heartbreaking as it is, one Gretchen is right to have. Edgar points out that, at this point, she should feel comfortable talking to Jimmy about her problems, but as it was made clear earlier, Jimmy really doesn't understand Gretchen or her depression. In a previous scene, she arrived home to find Jimmy curled up in the fetal position on the couch, sad that his screenplay was tossed out so that Diablo Cody could rewrite it. He claimed that this experience gave him newfound insight about the "psychic pain depression can inflict" and that it really "put [her] past flare-ups into context," only to wake up the next morning with a pep in his step because he decided to gaze into the "great void" of his sadness and say "no more!"

This idea — that someone can simply choose to not be depressed — is one of the most prominent misconceptions about depression, as well as one of the most harmful. Jimmy was certainly entitled to feel sad, but his and Gretchen's experiences aren't comparable by any stretch of the imagination, and him misunderstanding that is exactly what pushes Gretchen to hide what she's been going through in the first place. After her heart-to-heart with Edgar, Gretchen does tell Jimmy what's been going on, and while he assures her it will all be fine, the pained look on his face suggests otherwise.

The closer You're The Worst draws to Jimmy and Gretchen's wedding, the more apparent it's become that they shouldn't get married — not because they don't love each other, but because Jimmy can't give Gretchen the kind of support she needs. She feels like she has to pretend everything's fine and perfect or he'll leave her just like he did at the end of Season 3. Gretchen may have forgiven Jimmy for doing so, but as this episode shows, the fear and pain his abandonment caused may be too deep-seated to repair.