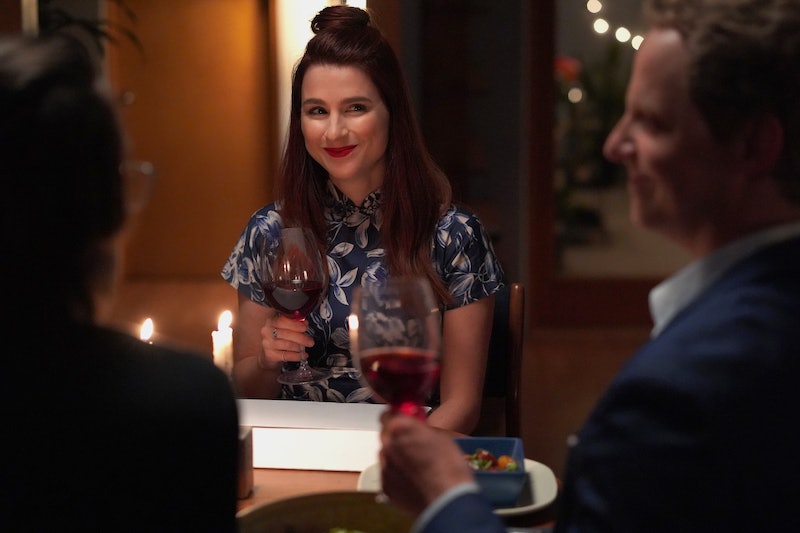 It's been a long journey for Gretchen and Jimmy on You're The Worst, and the stress of their impending wedding is clearly starting to take a toll on the bride-to-be. Though Gretchen has a newfound satisfaction with her work, feels great about her relationship with Jimmy (at least, when he's not hooking up with their florist), and seems to be on the way to becoming the best version of herself, she's still coping with clinical depression. And the Feb. 21 episode serves as a stark reminder that it's not something that just goes away because you're "happy."

The episode details the short-lived friendship between Gretchen, Jimmy, and their new couple pals Rachel and Quin. They meet at a cake tasting and become fast friends after realizing they share similar worldviews and "low to no morals." Becoming close with Rachel gives Gretchen a chance to vent about how Jimmy's recent fling with their florist is affecting her. Similarly, Quin helps Jimmy try and do the one thing that Gretchen says will get her to forgive him — to "suck a d*ck" — by setting him up on dating apps for men.

During a girls night, Gretchen reveals to Rachel that she doesn't know if she should have children because she's afraid of passing on her depression to her child. Gretchen immediately tries to backpedal from this emotional vulnerability, recoiling from an attempted hug and hiding in Rachel's house. Rachel tracks her down and lets Gretchen know that she is serious about friendships, and she fights to make those friendships work because if you're in Rachel's life, you're in Rachel's life forever. For Gretchen, however, forever may be a little too long, and she sabotages the relationship.

After she learns that Jimmy did "suck a d*ck" for their relationship — Quin's, in fact — and tells him she's fine with it, she lies and pretends she didn't know about the plan during a group dinner. Gretchen acts horrified, and tricks Quin into thinking Jimmy manipulated him, causing Quin and Rachel to storm out, effectively ending their friendships. Later, Gretchen sneaks into Edgar's bathroom and steals some of his prescribed pills to self-medicate. Much as she did in Season 2, Gretchen is pushing people away and lashing out at those that are trying to show her kindness.

Gretchen has struggled with depression before, but to see her tank such a positive relationship and start self-medicating with someone else's prescription is genuinely hard to watch given how far she's come. However, it's nice to see that Gretchen's mental health isn't just a plot point for the series; it's a significant part of who Gretchen is and always will be. Plus, it's not a total setback: she's pulled herself out of a depressive episode before, and perhaps now, she'll have even better tools to cope with it. Depression is a life-long battle, and something you have to work on continuously — even when it it seems like everything is going right on paper. That can be a daunting thing to come to terms with, but You're The Worst, at the very least, makes it feel less lonely.