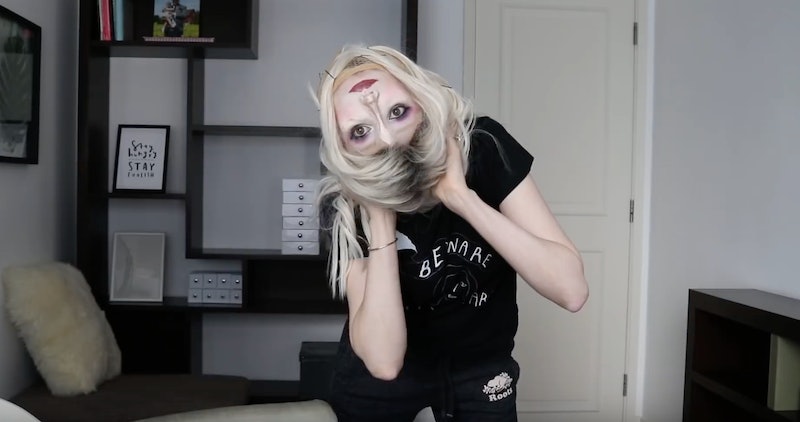 It's October, and that means that your Instagram is probably inundated with pumpkin spice everything, images of gourds, and fall foliage aplenty. Let's not forget, though, that October means Halloween, and this YouTuber's upside down face makeup tutorial is going to be the scariest thing you see during the spooky season.

On YouTube, there doesn't seem to be a busier season than fall. Not only are gurus creating their most vampy autumn makeup looks and transitioning into full coverage more matte looks, but it's Halloween, witches! That means some of the scariest FX makeup you've ever seen is hitting the internet. From melted ice cream looks to straight up horrifying lifted demon skin tutorials, the internet is a dangerous place for the faint of heart during October. Carry on at your own risk.

YouTuber Taylor R's upside down and reverse makeup tutorial is basically Halloween goals if you'e not afraid of some seriously creepy images. The content creator basically made it look like her head was upside, and while it is definitely an impressive feat, it's also going to low key give you nightmares. If, however, you goal is to scare the pants off your friends, Taylor has you covered.

In her video, Taylor explains that she's taken inspiration from a multitude of places to create this look. From simply putting makeup on in the reverse order to watching other YouTuber do their makeup upside down on their face, she decided to take everything a step (or 1,000 steps) further and make her entire head and face look as if it's upside. While the netting holding back her hair is visible in the final product, it's honestly kind of great especially if you simply glance at her.

Taylor began by covering her eyebrows in glue and powder to hide them, and then went about creating her base. Once down, it was on to the eyes. Watching the YouTuber do an entire eye makeup look upside down is simultaneously fascinating and the kind of thing that makes you want to go WTF.

Perhaps the most fascinating part of the tutorial, though, is watching Taylor construct a fake nose. While she openly admits to never having worked with special effects makeup in the past and tells viewers that her work isn't the best, seeing an actual upside down nose on someone's face is pretty entertaining. Plus, she totally admits to having fun with it, and that's what really matters anyway.

Ultimately, Taylor's result is an upside down face that would scare basically anyone if they were to see her that way in an alley. Basically, it's perfect for Halloween, and while it certainly looks like quite a bit of work to get all of the pieces of the face reconstructed, why not go all out for the holiday?

If you want to see every step to get Taylor R's upside down reverse makeup tutorial, head over to her channel and check it out. It'll be the spookiest thing you see today.