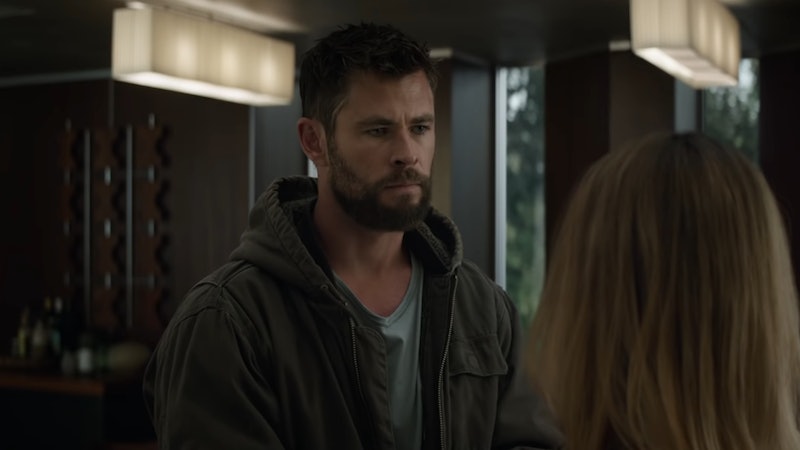 Now that fans have officially (sort of) come off of the high that is Avengers: Endgame some of the smaller details concerning our fave MCU gang are being dissected. (There will be spoilers for Avengers: Endgame ahead, so turn back now if you haven't seen the film.) One such detail is Thor's beard in Avengers: Endgame and his whole new look, really.

For those who haven't yet seen the movie (all six of you), in the aftermath of Avengers: Infinity War, the God of Thunder is struggling to adjust to a post-Thanos world. After failing to defeat the mega-villain, a five-year time jump reveals that the stress and guilt have not been kind to Thor's physical appearance. He's put on a few pounds, regularly nurses a beer, and his grooming habits certainly have changed. Thor's hair is longer, shaggier, and overall kind of unkempt looking. But even more Earth-shaking if you ask the Internet? His beard. Not only is it longer and more, shall we say, unpredictable looking, but it actually...transforms?

In a key battle scene later in the film, lightning strikes, the sky is gloomy, and the Asgardian god's beard seems to actually braid itself. It's a feat of sorcery that fans are still trying to figure out. What caused the impromptu braiding? How far do these hair powers extend? Not to mention, are people even into Thor's new manscaping situation? According to Twitter, people really aren't sure. What they do have a consensus on is that nobody wants to stop talking about it.

Now, there are definitely some pro-beard enthusiasts who saw Thor's new facial hair as a very exciting development. It might be one of those divisive things that if you like it, you really like it...

But while some saw Thor's beard as a thirst-trap of sorts, others were less than thrilled with the new look. I mean, fans are accustomed to seeing Thor with a very signature flowing-but-still-managed mane and beard. Plus, Thor: Ragnarok brought a slew of changes with Thor's haircut. So, this further development was a lot for some to handle.

However, others are focused less on if they liked Thor's new beard and more on HOW did these magical powers braid the beard? Like, forget how the Infinity Stones should work. At what point can the sky do a full beard styling session on a superhero mid-fight? Per usual, Twitter has questions.

And, naturally some fans have been drawing pop culture comparisons between Thor's beard and other film characters. Warning: once you see who some believe Thor looks like in this movie, you won't be able to unsee it.

No matter how your hammer falls on Thor's new beard, people really shouldn't be judging the God of Thunder for letting his facial hair routine fall by the wayside. He's been dealing with quite a bit, you know, trying to save the world from ruin and all. But it's to be expected that fans will run rampant with opinions on physical changes to their fave characters. Plus, magical beard-braiding makes for excellent meme material. Your move, Internet.