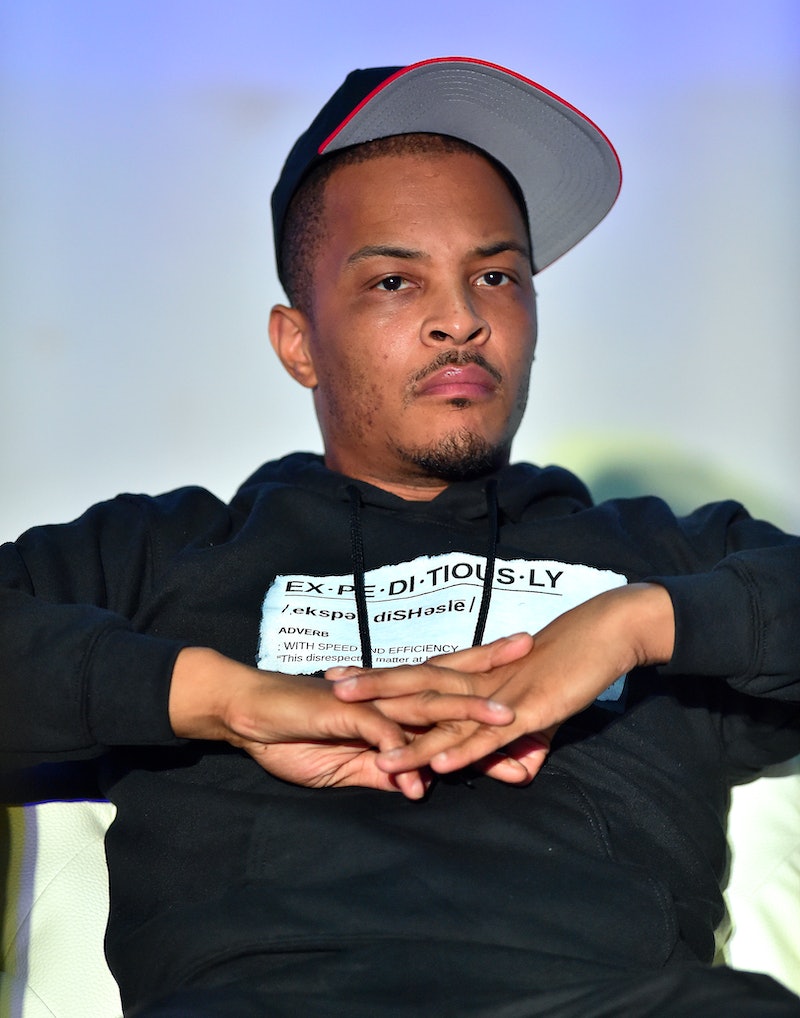 Rapper T.I. faced a great deal of backlash earlier this month after saying that he went to the gynecologist with his teenage daughter, 18-year-old Deyjah Harris, to make sure that her hymen was still in tact. The remarks sparked instant outrage, but T.I. has since apologized to his daughter for "Hymen-Gate," as he called it, during a recent sit down on Jada Pinkett Smith's Facebook Watch show Red Table Talk. The rapper revealed that he was sorry that he talked about his daughter's hymen in public, though he insists that the media has blown the whole thing out of proportion. All he wants is his daughter's forgiveness, which is why he only agreed to do the show after getting her permission.

T.I. first made his explosive comments speaking on the podcast Ladies Like Us, after hosts Nazanin Mandi and Nadia Moham asked if he'd ever had the "sex talk" with his daughter. "Yes, I go with her," he remarked, in reference to the visits to the gynecologist. He went on to claim that he was in the exam room during the first visit and watched as the doctor made Harris sign a waiver so that the information could be shared with him. "Just check the hymen, please, and give me back my results expeditiously," T.I. recalled saying, while adding, "I will say, as of her 18th birthday, her hymen is still intact."

But now T.I. is ready to clarify the matter with fans and explain his side of the story in light of all the backlash. "I came to clear up any misconceptions that have been surrounding how we interact and parent and what is appropriate and inappropriate," T.I. stated at the start of the episode of Red Table Talk. "I think all of this surrounds a conversation that I was having in a very joking manner, when asked how do I deal with parenting in this day and age. And so I just began to, you know, from a place of truth, I began to embellish and exaggerate."

T.I. went on to admit that he was completely unaware of how sensitive a topic like that is, though he claims to "absolutely" have a deeper appreciation for it now. (And hopefully have a better idea of what a hymen actually is.)

He also wanted to set the record straight on some of the details about the story. "I never said I was in any exam room, that is an assumption, that is a falsity," he claimed on the show. "I never said that it was being done present day as an 18-year-old...and I never said that her mother wasn't present. Her mom was present every time."

T.I.'s main concern, though, wasn't about public opinion but rather that the public debate upset his daughter, given the sensitive subject matter. Even now, he doesn't appear to regret his actions, and still seems to believe he deserved to have a certain amount of control over what his daughter did with her body. He's just sorry that he embarrassed her by speaking about it so publicly. And while any apology is better than no apology at all, that's not the main lesson he was supposed to take away from this whole problematic ordeal.

More like this
Lily Allen Was “Quite Emosh” After Performing Sober At Glastonbury Festival
By Stephanie Topacio Long
Prince William & Lorraine Kelly Lead Tributes To “Truly Remarkable” Dame Deborah James
By Sam Ramsden
Here’s How Lizzo Is Supporting Abortion Rights After The Roe v. Wade Reversal
By Brad Witter
Olivia Munn Got Real About How Her Body Hasn’t “Snapped Back” Post-Pregnancy
By Stephanie Topacio Long
Get Even More From Bustle — Sign Up For The Newsletter