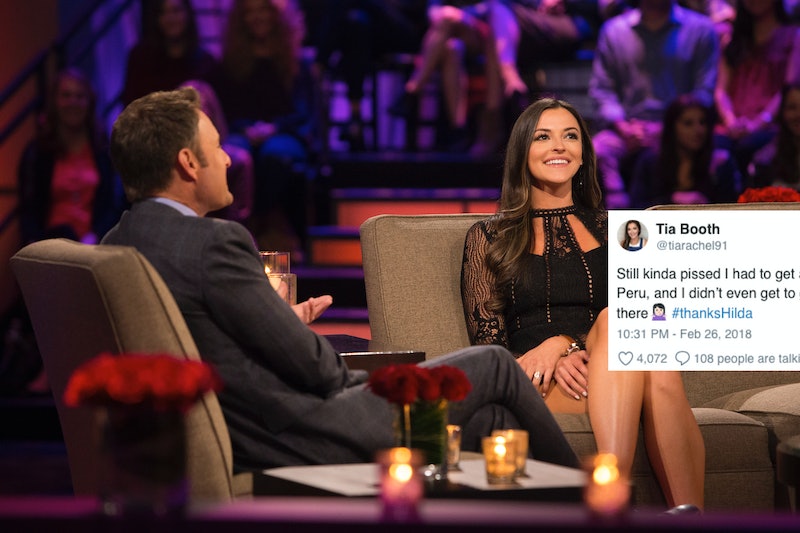 Bachelor Nation was shocked when Arie Luyendyk Jr. sent Tia Booth home right after hometown dates on The Bachelor, and she was clearly shocked when when she didn't get that rose. Aside from believing in her relationship with Arie, she was very prepared for the next trip the contestants would be taking. On Twitter Monday night, Tia tweeted about The Bachelor Fantasy Suite episode and said that she got shots in preparation for Peru trip, which is where the overnight dates took place..

During Monday's episode, Tia tweeted, "Still kinda pissed I had to get all the vaccines in preparation for Peru, and I didn’t even get to go. But that’s neither here nor there #thanksHilda." That must be so annoying. On top of the heartbreak, Tia missed out on a once in a lifetime trip.

Being a contestant on The Bachelor involves looking for signs of affirmation. Whether it's getting the first rose after a cocktail party, securing the group date rose, getting a 1-on-1 date, or even hearing the phrase "I'm falling you." Along the same line of thought, it would make sense for anyone to think "I got shots for this trip, of course I am going." In reality, Tia wasn't the only one who was medically cleared for the trip (all the final four contestants must have been), but it's still frustrating to get shots for no reason.

Tia wasn't the sole contestant this season who was prepared for the next phase of the "journey" only to get sent home right beforehand. Bekah Martinez was in contention for that last hometown rose with Tia during a tense 3-on-1 date with Arie. Bekah and Arie had been going strong the whole season, but Tia questioned Bekah's readiness for marriage on the group date. Bekah ended up being the last one to get cut before Arie went on hometown dates, but Bekah and her family were more than ready for him to visit. Well, everyone except for her dad was down to meet Arie in front of a camera crew.

Bekah tweeted after being sent home, "also, when producers called ahead of time to ask my family about hometown preparations if I made it, Dad flat-out refused to be there. Pulling a @TheRachLindsay Dad move. #Savage." Bekah's family was on deck for hometown dates, and they never got the chance, which is a bummer for Bekah and the fans who have heard so much about her mother ever since Bekah was reported missing.

Unfortunately, the almost-opportunities in the Bachelor franchise are not exclusive to this season. Caila Quinn competed for Ben Higgins' heart on Season 20 of The Bachelor, which aired in 2016. She was considered to become the Bachelorette lead that year, but the honor ultimately went to JoJo Fletcher.

Caila recently opened up about the decision during a conversation with fellow Season 20 contestant Olivia Caridi on her Mouthing Off With Olivia Caridi podcast. At the 36:53 point of the February 20 episode, Caila shared, "They flew me out a couple of times. I tried on all the dresses that JoJo wore. They paid for a trainer. And so it was like three months of 'we're moving forward with you' feeling. And they filmed at my house and met all my family."

She continued, "We were all really excited and then two days before they announced it, they told me. So, then I moved to New York that next day." Caila concluded, "Honestly, I don't think I was bitter about it. I think this was just how it was meant to be."

And that is really the best way to think about it. Sure, Tia was prepared to travel to Peru and Bekah's family was contacted to coordinate a hometown date, but those things didn't happen. It has to be frustrating to get ready for something and be so close to it happening only for it to fall through, but if it doesn't happen, it just wasn't meant to be.

Plus, Tia has no idea what's in store for her future in this franchise. Those shots could come in handy for Tia as the lead of The Bachelorette next season for potential trips or she could travel to Mexico to star on Bachelor in Paradise this summer. Either way those vaccines won't necessarily go to waste.