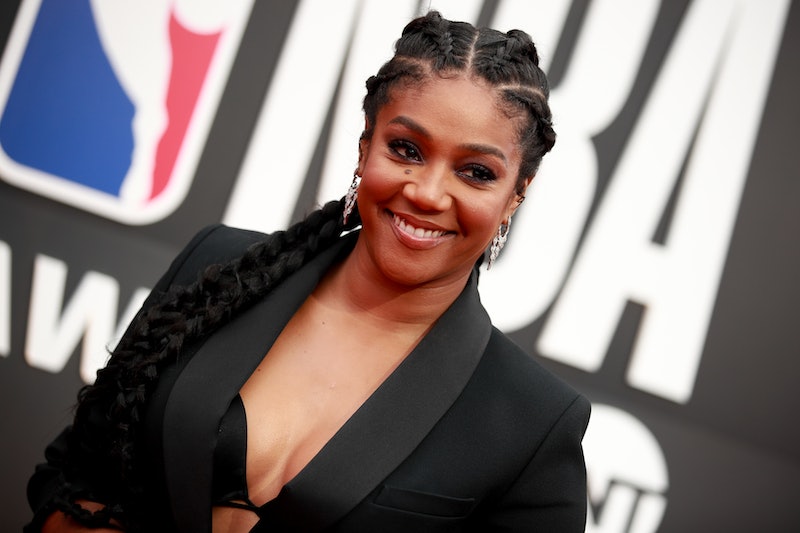 If you're ready for a new comedy series on Netflix, there's some good news for you today. Tiffany Haddish's Tiffany Haddish Presents: They Ready is coming to Netflix this summer, and it might be your next favorite show to marathon. Rolling Stone reported on July 23 that Haddish' new show will feature "six of her favorite comedians" in a half-hour episode stand-up comic series. The comedian will host and executive produce the series, which premieres on Netflix on Aug. 13.

The Netflix comedy Twitter account, @NetflixIsAJoke, shared a video from Haddish to announce the exciting news. In the video, she's surrounded by her crew, "They ready," hence the title. "6 comics. August 13th. If @tiffanyhaddish and @iamwandasykes say 'They Ready', I'm in!" the account wrote. Sykes is also an executive producer on the show, along with Page Hurwitz.

When They Ready was picked up by Netflix in March, the streaming platform released a statement saying that the show was specifically created to give "women, people of color, and LGBTQ performers" an opportunity to showcase their talents. And the new series will spotlight comedians personally chosen by Haddish. "I am introducing six of my favorite comedians," the comedian said at the time, per The Hollywood Reporter. "In my eyes, they are superstars — the epitome of The Ready."

The comedians featured in Season 1 of They Ready include Chaunté Wayans (Wild n’ Out), April Macie (Last Comic Standing), Tracey Ashley (The Last O.G.), Aida Rodriguez (Comedy Central’s This Week at the Comedy Cellar), Flame Monroe (Def Comedy Jam) and Marlo Williams (BET’s Comicview), according to Rolling Stone. And each comedian on They Ready will get to perform a half-hour long set, giving them all an opportunity to shine on the platform.

Ever since her break-out role in Girls Trip put her in the mainstream spotlight, Haddish has been spreading her hilarity far and wide. Earlier this year, she completed her #SheReady comedy tour, in addition to starring in various movies like The lego Movie 2: The Second Part and The Secret Life of Pets 2. And she has even more new projects coming up, including a dramatic turn in The Kitchen and a gig hosting Kids Say The Darndest Things, on CBS.

Speaking with Glamour in September of 2018, Haddish said that she wanted to work with Steven Spielberg and Quentin Tarantino, hinting at more dramatic roles in her future. Don't worry, though, that doesn't mean she's leaving comedy behind. In addition to She Ready, Haddish is working on a buddy-cop project with Chris Hemsworth called Down Under Cover. It involves Hemsworth going undercover as an Australian strippers, so if that means he's gonna go all Magic Mike down-under, then sign everyone up for that one.

It's unclear whether They Ready will return for a Season 2, but even if it doesn't, that won't be the end of Haddish's relationship with Netflix. The comedian will also have an unnamed one-hour stand-up special coming to the platform sometime soon. And, when it does, we're the ones who will be ready.

More like this
Here’s Everything Coming To & Leaving Netflix In February
By Jake Viswanath
The Black Lotus Staff Has "Had Enough" In The 'White Lotus' Spoof From 'SNL'
By Brad Witter
'The Crown' Season 6 Has Suspended Filming "Out Of Respect" For The Queen's Death
By Bustle Staff
At 28, Debra Jo Rupp Was Living A Much Different '70s Show
By Grace Wehniainen
Get Even More From Bustle — Sign Up For The Newsletter
From hair trends to relationship advice, our daily newsletter has everything you need to sound like a person who’s on TikTok, even if you aren’t.