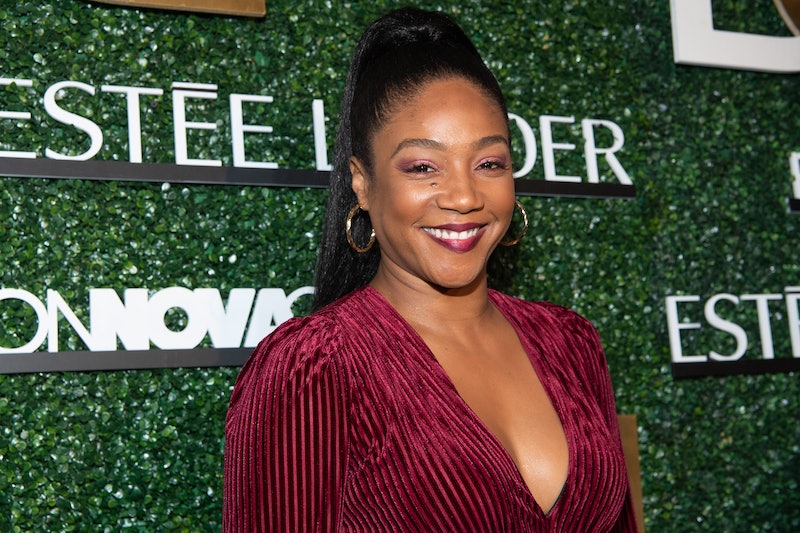 Streaming is about to get even funnier thanks to Tiffany Haddish's new Netflix show. The series, Tiffany Haddish Presents: They Ready will help up and coming stand-up comedians get their big break with a little help from Haddish, herself. Oh, yeah, you bet they're ready, and Haddish hopes fans are, too.

On Tuesday, March 26, Netflix announced it was teaming up with executive producers Haddish, along with Wanda Sykes and her company Push It, for a new comedy series that will introduce the world to six comedians that she thinks have what it takes to be big stars. All they need is a little help. "In an industry that too often excludes women, people of color, and LGBTQ performers," the press release from Netflix stated, "this diverse group of comedians, both in style and background, are ready for their time in the spotlight."

All six comedians were handpicked by Haddish herself and will get their own half-hour stand-up series to show comedy fans what they've got. The comedians featured in the first season of They Ready are an inclusive group of mostly women, including Last Comic Standing Season 4's April Macie, BET’s Comicview's Marlo Williams, The Neighborhood writer Tracey Ashley, and Wild n' Out's Chaunté Wayans, who's also a member of that Wayans family.

The other comedians featured in the series are Afro-Latina comedian Aida Rodriguez and Flame Monroe, who is a single dad by day and a drag queen by night.

Haddish has previously talked about her own difficult journey as a stand-up comedian. Despite getting her big break with 2017's Girls Trip, she had already been working for over a decade at her craft. Throughout her 20s, Haddish said, she was homeless and living in her car. That time, though, she told Variety last year, taught her to “know your worth, and don’t settle for less." It's why she has used her fame to help others realize they are good enough, including the six comedians she's chosen for her Netflix stand-up series.

"You don’t have to wait for some man in the office or even a woman sitting up in the office at the top of the studio to say, “OK, you can do this,'" Haddish told Variety. "You can do it yourself."

While Haddish will be behind the scenes for They Ready, fans will be able to see her in the new season of The Last O.G., which returns for its second season on April 2. For those who need more Haddish in their life, they'll also be able to hear Haddish's voice in the upcoming Netflix animated comedy Tuca & Bertie, out May 3.

The series from Lisa Hanawalt, the animator behind Bojack Horseman, features Haddish as a toucan who's figuring out her life after moving out on her own. Luckily, she has her avian BFF, voiced by another funny lady in Ali Wong, living a few floors down to help her. She'll also pop-up in Netflix's Laugh-In Comedy Special alongside others like Lily Tomlin, Billy Crystal, and Rita Moreno.

Haddish is also set to produce an upcoming HBO series written by The Mindy Project's Xosha Roquemore and Danielle Henderson, the creator of Feminist Ryan Gosling. The comedy called Unsubscribed will reportedly take a closer look at "female blackness, beauty, and identity through a behind-the-scenes look at the Instagram hustle," according to Page Six.

Haddish is keeping herself busy and making opportunities not only for herself, but others too. Clearly, she's ready to take over TVs everywhere.

More like this
Here’s Everything Coming To & Leaving Netflix In October
By Jake Viswanath
Watch The Thrilling Teaser Trailer Of 'Shadow And Bone' Season 2
By Gretchen Smail, Jack Irvin and Sophie McEvoy
Mike Flanagan Teases 'The Midnight Club' In This Exclusive, Creepy Clip
By Grace Wehniainen
Caleb McLaughlin Details Racism From 'Stranger Things' Fans
By Radhika Menon
Get Even More From Bustle — Sign Up For The Newsletter