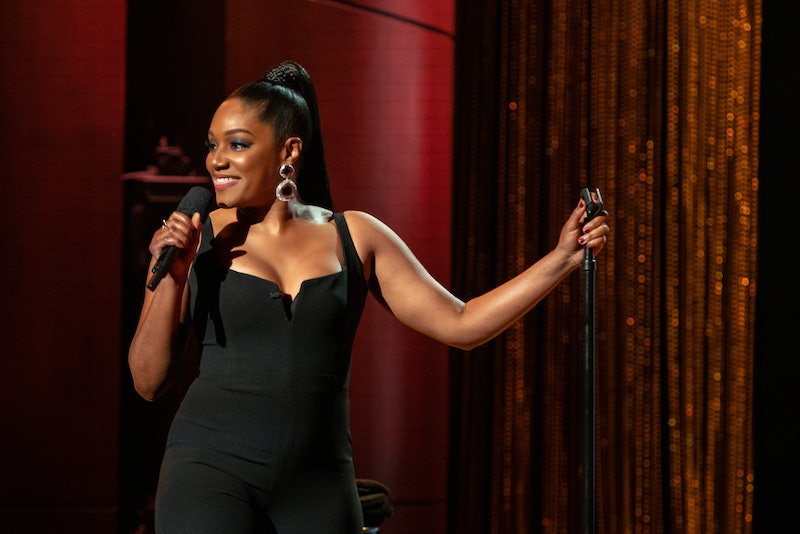 After years of working relentlessly in comedy and overcoming massive hurdles such as homelessness, Tiffany Haddish's Netflix special Black Mitzvah ratifies her booming success. It also acknowledges (read: makes fun of) the multiple fails and stumbles that paved the way, including Haddish's 2019 New Year's Eve show in Miami, which she infamously bombed after getting admittedly very, very drunk the night before.

Like most comedians, she's not afraid to troll herself in front of thousands of people, which is exactly what she does while retelling the story. After pushing through back-to-back jobs and securing an Emmy win and Grammy nomination, it was finally time to let loose and celebrate, she says in the special. Her night of celebration may have gone too far, and the next day, she shared a *very* hungover video to promote her upcoming show. "She was not ready!" Haddish exclaims on stage as she rewatches the video with the crowd.

She woke up the next morning to headlines smearing her name. Still, she says she wasn't too concerned and she was ready to move on, until she started getting worried phone calls from her biggest mentors in entertainment. She says she got calls from Kevin Hart, Oprah Winfrey, and legendary stand-up comedian Sinbad. "I know that you're gonna have better shows," Oprah allegedly told her. And Sinbad, she says, gave her the most impactful piece of wisdom of all.

"He said, 'Tiffany, let me tell you something. I had shows on New Year's Eve too. And I did bad, man,'" she recalls onstage. "'But you know what's crazy is, nobody talked about my show. So you know what that means ... That means you made it. You a star.'" Haddish wipes a tear from her eye in memory of the conversation, because it was a moment that validated all of her hard work. It was then that she realized even her failures could be successes.

Black Mitzvah is an obvious play on bar mitzvah, which traditionally celebrates a Jewish girl's maturity on her 12th birthday. But for Haddish, this special represents much more. It pays respect to her father's Eritrean Jewish roots, which she discusses during the set, it's a nod to her past life as a bar mitzvah "energy producer" ("I've been to like over 500," she says in the special), and it marks her own coming-of-age moment, even though she's a little older than 12. According to HuffPo, she plans to hold her own official Jewish celebration alongside its Dec. 3 premiere.

Black Mitzvah serves as a point for reflection on the trials she faced in order to achieve; from raising herself, to learning to read at 16, to living through winters out of her Geo Metro. She calls herself a survivor, which she is. And now that she's officially made it — Sinbad's stamp of approval and all — she wants to teach others to do the same, even if that means trolling herself in the process.