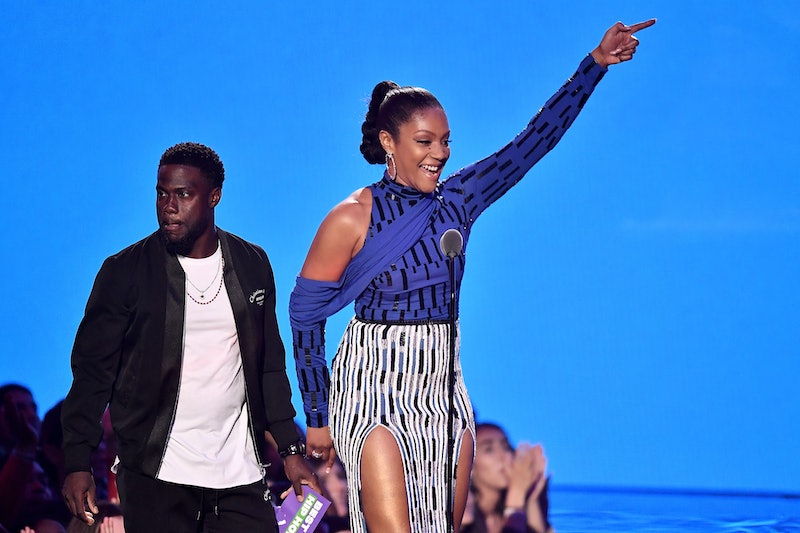 So maybe you thought you were excited for Jennifer Lopez's epic 2018 MTA Video Music Awards performance to celebrate her receiving the Michael Jackson Video Vanguard Award. But I can promise you, yours was nowhere near the level of excitement of presenter Tiffany Haddish. No one loved Lopez's medley of hits more than Haddish, except for maybe Alex Rodriguez.

Lopez took the stage about two-thirds of the way through the Aug. 20 ceremony to perform a huge mash-up of her hits. (And does she have hits, let me tell you.) From "Jenny from the Block" to "Get Right" to "All I Have," the artist did at least a little bit of all of your favorites. If you were sitting there thinking, "I forgot how many bops Jennifer Lopez gave us," then, there you go: You know exactly why she was the recipient of this year's Video Vanguard Award, a sort-of lifetime achievement in making music videos. (Though, if you were listening closely to Lopez's speech, you know that she doesn't plan on quitting anytime soon. This isn't an end-of-career award, more of a middle-of-career award for everything that she's accomplished so far.)

The whole audience at Radio City Music Call was clearly in the palm of Lopez's hand, so much so that no one seemed to be listening to Shawn Mendes' presentation of the actual award. How could they? They were too hyped. But one member of the crowd stood out from all the others. Tiffany Haddish was up on her feet the moment that Lopez hit the stage, being her best stan self. Take a look:

Is Haddish shouting her catchphrase, "She ready," at the star? That's very, very probable. Because if anyone has been and stayed ready, it's Lopez. The triple threat artist said during her acceptance speech that she was often encouraged in her career to stick to one art form and leave the rest behind. Thankfully, she didn't heed that advice, which is why we have J.Lo the singer, dancer, actor, and even producer. She's an example for women who are multi-talented and want to show off everything they can do, not just some of what they can do.

Lopez received her very first VMA nominations back in 1999 for her debut hit, "If You Had My Love." Though she was up for five Moon Person trophies, she didn't take any home that year. She won her first the next year in 2000 for Best Dance Video for "Waiting For Tonight," and kept racking up the nods over the years. While she's only won a total of three VMAs (including the Video Vanguard tonight), she's been nominated for a whopping 24 throughout her career. She's recorded so many hits, in so many genres, it's no wonder that your favorite comedian was up out of her seat celebrating the icon.

Haddish isn't one to act demure at an awards show, and Jennifer Lopez isn't one to act like she doesn't have a ton of talent to offer. And fans are appreciating that they were both loud and proud at this year's VMAs.

More like this
An Ultimate Guide To The Music Of 'Rap Sh!t'
By Brad Witter
How Lady Gaga & Adele Are Closer To The EGOT All Of A Sudden
By Jake Viswanath
Bridgerton’s Simone Ashley Stars In ODESZA's "Love Letter” Music Video
By Radhika Menon
Why Eurovision 2023's Host City Won’t Be Revealed For A While Yet
By Sam Ramsden and Rachel Mantock
Get Even More From Bustle — Sign Up For The Newsletter