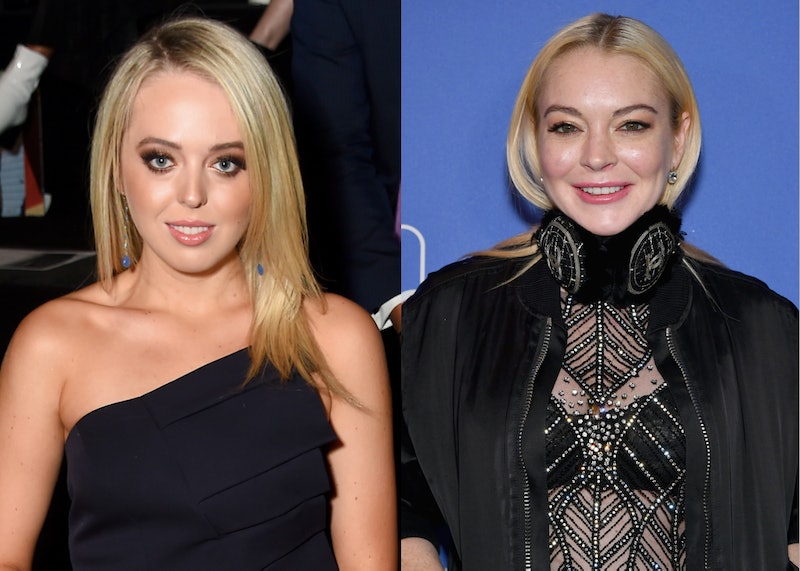 At least some people are having a fun summer. Those fun-having people are Tiffany Trump and Lindsay Lohan, who are in Greece at Lohan's new resort and club in Mykonos. Tiffany was visiting and partying in Greece with her friend, the fashion designer Andrew Warren. They arrived on Thursday, according to Yahoo Lifestyle.

On Friday, Lohan shared a picture of herself and Tiffany on Instagram, but the post was deleted "just hours" later, according to Yahoo Lifestyle. The photo of Lohan, Tiffany and Warren still lives on at an Instagram fan page for Lohan @lindsaylohan_argentina. The page @lindsaylohan_argentina posted a video of Lohan helping Tiffany put her hair up on Friday night. TMZ reported that the trio was at a fundraiser for victims of the Grecian wildfires.

Warren's verified Instagram served as the primary documentation for the trip. In a shot of Trump, Warren, and more than a half dozen people on a yacht in Mykonos, Warren initially tagged Lohan, according to screenshots from Refinery29 entertainment writer and editor Morgan A. Baila.

Lohan commented on the photo, "Did @lawyer_com and @realdonaldtrump approve of this? Why would you post this?" (Lawyer.com is a website that functions similarly to a dating site for attorneys and clients, according to Time. Lohan is a spokesperson for the site.)

Lohan's tag is gone as of Saturday morning, but Warren's picture remains. There seems to be no bad blood as a selfie of Lohan and Warren with a crown filter was on his feed, too. Lohan commented on the photo: "#BFF #💖💖💖💖💖💖💖💖💖💖💖💖." (Lohan has positively commented on other shots from Warren's Greece trip.)

The Cut reported that Tiffany's trip to Greece was being planned since at least the beginning of June when Warren posted about the trip on Instagram stories. Lohan also told The New York Times in a sweeping profile published in June that Tiffany was an old friend. Tiffany is "a really sweet girl. Nice person," Lohan told the Times.

Greece is just the latest stop in Tiffany's summer travels. Before she got to Mykonos with Warren, Tiffany visited London with her mother Marla Maples on Wednesday. They were joined by Tiffany's friend Karen Shiboleth, who goes to school in England, according to the London Evening Standard. Tiffany 'grammed their meeting later.

After finishing up her 1L year at Georgetown Law School, Tiffany began traveling around the East Coast, including the Trump Winery in Virginia. Earlier this summer, Tiffany went to Camp David, the historic presidential retreat, with her father, Ivanka Trump, Donald Trump Jr., and Jared Kushner. According to Page Six, Tiffany has attended multiple parties in the Hamptons.

Traveling abroad is a regular activity for Tiffany. Before she started her first year at Georgetown, Tiffany and Marla went to Italy.

In June 2017, Tiffany went to Berlin with her then-boyfriend. CBS News reported that during the trip, hotels for the Secret Service detail for the first daughter cost about $22,439.

Tiffany isn't the only Trump sibling whose travel is incurring taxpayer costs. CBS News reported in September 2017 that an annual ski vacation to Aspen by two Trump siblings and their families cost $330,000 in security details.