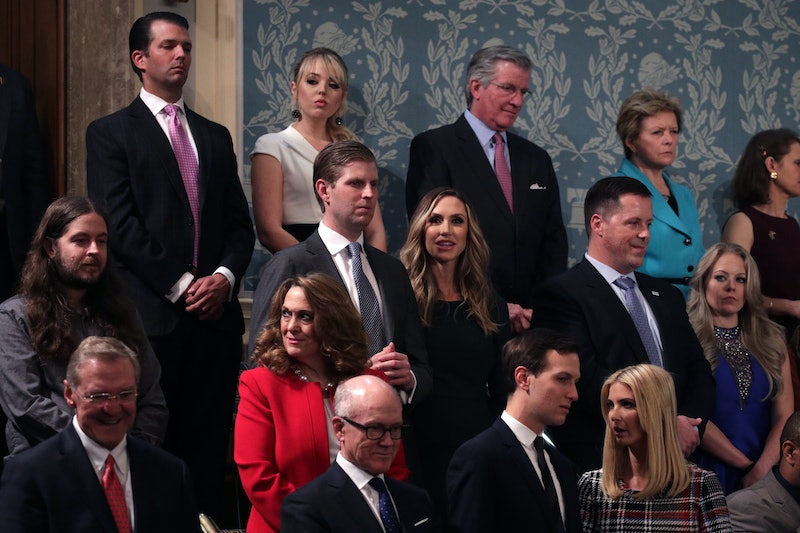 The Trump women are definitely known for making fashion statements. At the State of the Union (SOTU), Tiffany Trump's outfit was no exception.

Arriving in a belted black pencil skirt and v-neck white top, Trump's outfit suggested an air of professionalism. This makes sense if you consider that the First Daughter is currently attending law school at Georgetown Law School. She's known for an Instagram feed teeming with rooftop and beach photos, but though her social media feeds reflects a more lighthearted fashion repertoire, she opted for a more timeless look on Tuesday evening.

However, despite seeming innocuous at first glance, there was one aspect of her outfit that prompted questions — the coloring, and whether that coloring was sending a subvert message. At face value, it seems simple — a classic black and white ensemble. But at the 2018 SOTU, even clothing color was politicized. Many Democratic women, for example, made a public pledge to wear black as part of a #SOTUBlackout demonstration.

The intent of #SOTUBlackout was to stand in solidarity of victims of sexual assault, harassment, and more broadly, gender iniquities as a whole in the United States. The demonstration was spearheaded in part by Rep. Lois Frankel, chair of the Democratic Women's Working Group.

In an interview with Vox, Frankel said that the intent of the demonstration was to send “a message of solidarity with those who are seeking economic security and a cultural shift that enables men and women to work side by side, in safety and dignity, free of sexual harassment, and be paid fairly for the value of their work."

That one half of Trump's outfit was solid black begs the question of whether she knew was the color could represent. But the questions don't stop there.

There was another act of sartorial solidarity at the State of the Union. GOP women reportedly planned to wear red, white, and blue as a sign of support for the military. Now, technically, of course, one third of those options is white — also the color of Trump's shirt. But if you remember the 2016 election, you'll also remember the political weight that the color white held.

Donald Trump's opponent, Hillary Clinton, famously wore the color during major events, as a power-move of sorts. She said that it was intended to evoke the reputation of the Suffragettes — the activists who fought for women's voting rights about a century ago. She even wore an all-white outfit to the Trump inauguration in January of 2017, indicating to supporters that the battle for women's equality was not over yet.

Tiffany Trump has a habit of staying out of the spotlight, so the world may never receive a definitive answer. Frequently compared to her sister, Ivanka, the younger daughter has been referred to as the forgotten Trump. In a 2016 profile, The New York Times referred to her as "the other Trump." With such a low-key profile, it can be difficult to get a handle on who she actually is, and that includes her own personal political opinions.

Tiffany's Instagram is the most intimate version of the first daughter that the public generally sees. On the social media site, she has nearly one million followers. But even then, the app is known as an outlet for users to represent a manicured and closely-curated version of their lives. So, while the socialite does share certain parts of herself with the masses, even that isn't a guaranteed measure of her personality or character.

Of course, when she graduates law school, all of this could definitely change. But until then, it's mostly up to speculation.