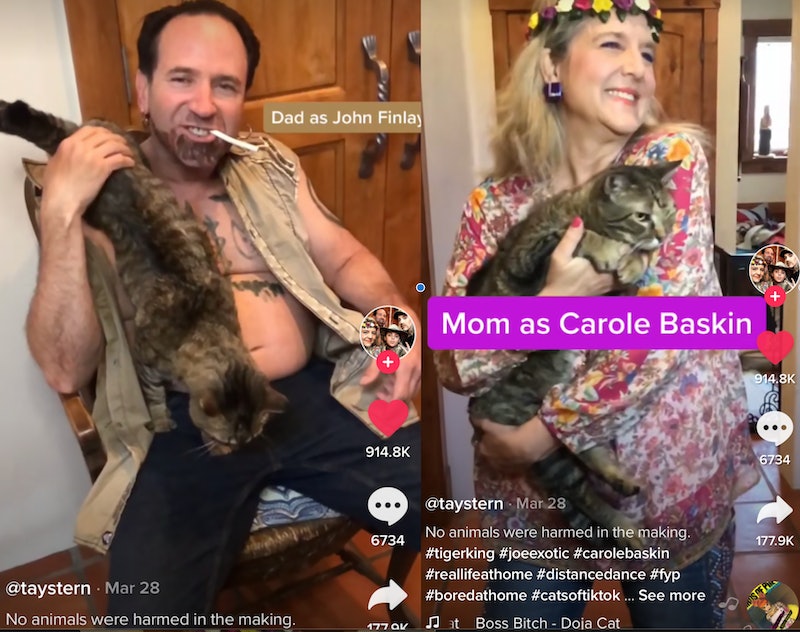 If eight episodes of Tiger King on Netflix wasn't enough for you, head over to TikTok, where families are having elaborate Tiger King-themed dinner parties, and make up artists are forgoing glow-ups for Joe-ups. Videos with the hashtag #TigerKing have garnered over three billion views on TikTok, and you can easily lose an afternoon scrolling through them. If time is meaningful for you, let me gift you a brief summary of what you're missing: People are dressing up as Joe and lip syncing to his (suspiciously great?) country songs. People are lip syncing to Carole Baskin audio clips — "Hey all you cool cats and kittens!" — donning flower crowns and going for slow-mo bike rides. People are dancing to the Savage x Carole Baskin remix song. People are casting their entire quarantined families as Tiger King characters to break bread in costume.

Why? According to Taylor Stern, a TikToker who shared her family's Tiger King-themed dinner on the app, earning over 900k likes, she was just trying to keep the Tiger King entertainment going after that last episode. "After binging the series, we noticed a few similarities between the characters and our family. We were trying to come up with some fun ideas to keep everyone staying positive and laughing so we decided on a themed dinner for the weekend," she says. Though the band of characters on the show are inarguably outlandish — it's part of their charm — families on TikTok are having no trouble finding themselves in them.

While these costume dinner parties require some effort, the looks can easily be achieved with things you already have around the house; stuffed animals, cowboy hats, bandanas, and black eyeliner. Special effects artist Taelor Cansler, a TikToker who debuted a Joe Exotic transformation recently, tells Bustle that she was surprised by how easy it was to find a convincing Joe Exotic costume by "using whatever I could find around the house." Stern and her family committed to the full cast of cats and kittens: Stern donned a Doc Antle costume, her mother dressed up as a flower-crowned, house-cat-wielding Carole Baskin, her father as shirtless John Finlay, and her sister as Joe Exotic — faux eyebrow piercing and all.

For make up artist Alexis Stone, who has done over 200 celebrity transformations on social media to date, turning into Joe Exotic was an "obvious choice." But what Stone didn't expect was that Joe's husband Dillon Passage would reach out to say "how amazed he was by the resemblance." The two even went on Instagram Live together to chat about all things Exotic — including the Tiger King memes, which Passage said both he and Joe are enjoying.

For Lily Lauterman and her family, a Tiger King dress-up party was the perfect remedy for coronavirus-related cancellation of her father's retirement celebration. "We have all been watching the show together, and because we couldn't have a party for my father's retirement, we decided to do a themed dinner for him instead." Lauterman tells Bustle that she and her brother have spent a good amount of time entertaining themselves on TikTok since social distancing policies took effect, so they were more familiar with the trend. "Naturally, we had to film the dinner and share it with the world," she says.

Though this TikTok trend might appear to be all mullets and tiger print, it's highlighting a way that families are coping through the strain of the pandemic. "After dealing with anxiety from the pandemic and overall global crisis," Stern says, "we all got really into it because it was a nice break from reality."