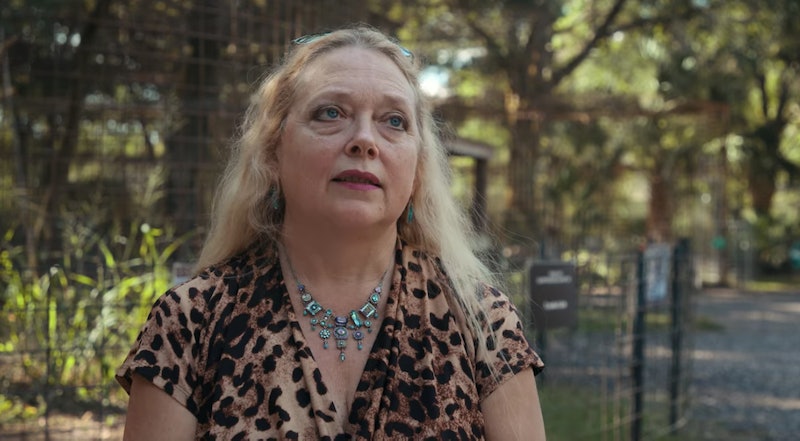 In addition to chronicling Carole Baskin's feud with Joe Maldonado-Passage (aka Joe Exotic), the Netflix documentary series Tiger King also addresses the mysterious disappearance of her ex-husband, Don Lewis. Now, after watching the series for himself, a Florida sheriff asked Tiger King fans for new leads about Carole Baskin's husband and the circumstances surrounding his sudden disappearance in 1997. And he's already getting results.

Lewis was last seen in 1997 ahead of a scheduled trip to Costa Rica; the following year, his daughter, Donna Pettis, accused Baskin of being involved with Lewis' disappearance in an interview with People magazine, though Baskin has never been charged. (Lewis was declared dead in 2002.) While Baskin has repeatedly denied knowing anything about her husband's disappearance, the third episode of Tiger King — titled "The Secret" — focuses on Maldonado-Passage's accusation that Baskin murdered her husband and fed him to her pet tigers.

With everyone talking about the outlandish series and Maldonado-Passage's accusations, Hillsborough County Sheriff Chad Chronister decided it was the perfect time to reinvestigate Lewis' disappearance. "Since Netflix and COVID-19 quarantine has made Tiger King all the rage, I figured it was a good time to ask for new leads," he wrote on Twitter on Monday, March 30. Chronister also shared a photo asking anyone with leads to "call the Hillsborough County Sheriff's Office," along with the statement, "Only YOU can help solve the Jack 'Don' Lewis cold case." According to local news station WFLA, Chronister has been receiving "six tips a day" over the past few days, as Tiger King has continued to gain popularity.

Tiger King isn't the only thing bringing new attention to Lewis' sudden disappearance. On March 21, Robert Moor, who produced the Joe Exotic: Tiger King podcast for Wondery shared a Twitter thread full of "trivia" that wasn't included in the Netflix documentary, including some information about Baskin's relationships. "After Don Lewis vanished, but before Carole married Howard [Baskin], she dated a guy named Jay Baykal," Moor wrote on Twitter. "In 2002, Jay filed a restraining order against Carole, which includes some bizarre and suspicious-sounding details regarding Don's disappearance."

In the post, Moor included photos of the restraining order, in which Baykal claimed that Baskin threatened to "kick my ass out of there, whatever it takes," and that when questioned about Lewis' disappearance, she had told him that "[a] dead body can not talk." Baykal also claimed that he feared for his life because of Lewis' disappearance and because Baskin "carries two loaded guns on her always, one in her truck and one in her residence."

While Baskin has not responded to Moor's Twitter posts, she did criticize Tiger King in a blog post shared to her Big Cat Rescue website on March 21, calling the series "salacious and sensational." In particular, she called out the producers for "lies and innuendo" presented in the episode addressing Lewis' disappearance. Though she claimed that "Don was not easy to live with," Baskin also maintained that she "never threatened him and I certainly had nothing to do with his disappearance."

It's unclear whether or not the mystery of Lewis' disappearance will ever be solved, but with everyone talking about Tiger King, there may be no better time to reopen this very cold case.

More like this
'Indian Matchmaking's Arshneel Is Keeping His Potential Courtship With Rinkle Private
By Radhika Menon
'Selling Sunset's Jason Oppenheim Has A New Model Girlfriend
By Alyssa Lapid and El Hunt
Move Over, 'Sunset'! The Drama-Filled Trailer For 'Selling The OC' Is Here
By Nola Ojomu
'Indian Matchmaking's First British Cast Member Knows *Exactly* What She Wants
By Shahed Ezaydi
Get Even More From Bustle — Sign Up For The Newsletter