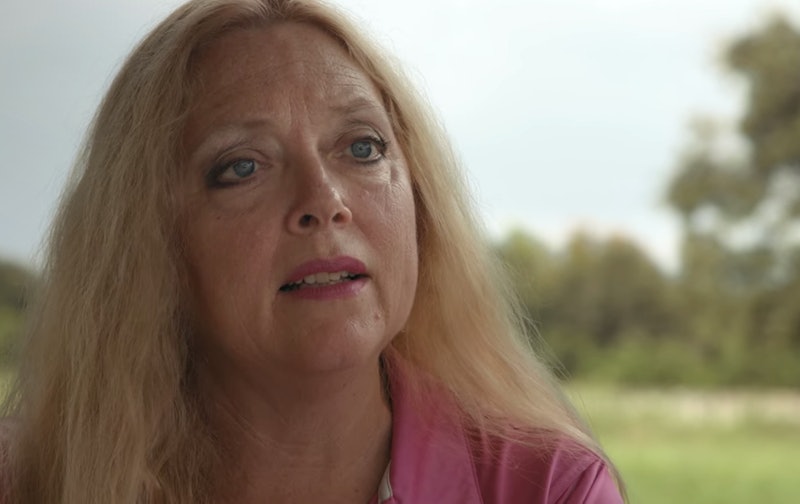 Tiger King: Murder, Mayhem and Madness chronicles the rise and fall of Joe Exotic — aka Joseph Maldonado-Passage, the titular "Tiger King" of Oklahoma — and his deep-seated rivalry with animal activist Carol Baskin. In one of his most public taunts against Baskin, Maldonado-Passage alleged that Carol Baskin's husband Don Lewis went missing in 1997 because she killed and fed him to her cats. Law enforcement didn't find evidence of foul play, but Lewis did disappear without a trace, and his missing persons case remains unsolved to this day.

In his 2015 "Here Kitty Kitty" music video, Maldonado-Passage mocked Baskin with an unflattering impersonation of her, painting her as frivolous and money hungry. He alleged via the lyrics that Baskin killed Lewis to inherit his fortune, and that she then fed him to her tigers to erase all evidence. The basis of his allegations were a 1998 People article in which Lewis' family accused Baskin of foul play. Lewis' daughter Donna Pettis said that they were "upset that the cops didn’t test the DNA on [Baskin's] meat grinder" because "it’s a perfect scenario to dispose of someone."

“My tigers eat meat; they don’t eat people,” Baskin told People in response. “There would be bones and remains of my husband out there. I’m amazed that people would even think such a thing.”

Lewis did leave behind a hefty inheritance, which only deepened the conflict between Baskin and his children from an earlier marriage. Jack Donald Lewis was a millionaire at the time of his disappearance; per a 2005 Tampa Bay Times article, Lewis learned how to hustle early on, working three jobs in high school before making money in tanker trucks, car auctioning, and predatory real estate. His acquaintances called him "ruthless," and when he met Baskin in 1981, they carried on an affair until Lewis' 1990 divorce. Then they got married and started rescuing big cats, opening up a sanctuary called Wildlife on Easy Street. Per People, the annual budget for the refuge is $225,000 a year.

Lewis suddenly went missing on August 18, 1997, at the age of 59. Lewis' van was found two days later at the nearby private airport in Pasco County, where Tampa Bay Times reported he was known to "buy aircraft impulsively with cash." His credit cards remained unused. An extensive police investigation looked into everything, including Lewis' Costa Rica properties where he wanted to retire, but they uncovered only "extramarital affairs" and "questionable business practices."

Lewis' cold case is full of conflicting information that further muddies the truth of his disappearance. In June 1997, two months before his disappearance, Lewis told a Hillsborough circuit judge that Baskin threatened to kill him. That same month, Baskins urged Lewis to visit a psychiatrist, but he never returned after his first session. Authorities also received an unconfirmed report that Lewis was in Costa Rica; Baskins claimed in court documents that Lewis' personal assistant Elizabeth McQueen was secretly transferring money to herself to pass onto him in Costa Rica. In response, McQueen said Lewis has always kept his assets under different names, and that she had "done nothing that Mr. Lewis did not instruct me to do."

The Hillsborough sheriff's deputies still do not know if someone smuggled Lewis off to Costa Rica, if he disappeared on his own, or if he is even still alive — a body has never been found. As John Marsicano, one of the lead detectives on the case, admitted to People: “We don’t have a good idea of what really happened to him.”

More like this
Michael & Kathleen Peterson’s House From ‘The Staircase’ Has New Owners
By Kadin Burnett and Kayla Blanton
Where Michael Peterson From 'The Staircase' is Now
By Justice Namaste
Where Is Dr. Cline Now?
By Morgan Leigh Davies
Everything We Know About Chèrie & Jessey’s Abrupt Exit From Bling Empire
By Alyssa Lapid
Get Even More From Bustle — Sign Up For The Newsletter