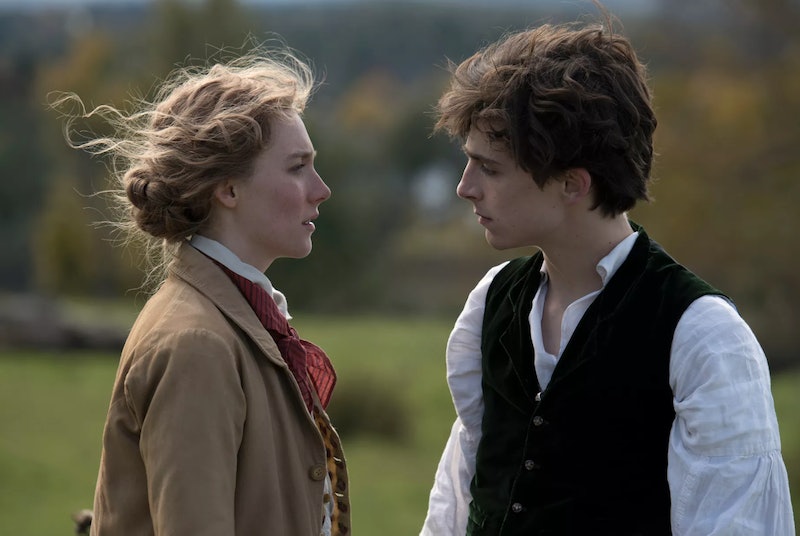 When I first realized that Jo and Laurie, the central will-they-won't-they couple in Louisa May Alcott's centuries-old classic Little Women, would not end up together, I wept. Every time the story has been adapted for the screen and the stage, that's been the intended reaction. Laurie is charming, utterly gorgeous, and sweet to both Jo and her sisters. All he wants to do is shower Jo with buckets of money and love. Why say no to his proposal?

Little Women the novel and its subsequent stage and screen adaptations all recognize on some level in this pivotal scene that married life with Laurie is explicitly not the future Jo wants. Jo is ambitious and sometimes difficult; she's not willing to settle for anything less than what she wants, which is to become a writer — even if it defies the conventions of the time. Jo rejects Laurie's proposal by saying they would argue too much and she doesn't want to be a wife (let's just forget about what happens with Mr. Bhaer later). No matter the adaptation, that famous rejection scene is usually heart-wrenching not because we realize that Jo and Laurie aren't a match, but because Jo is choosing ambition and independence over him. But Greta Gerwig's Little Women crystallizes the myriad reasons for Jo's rejection of Laurie, bringing new meaning to the novel's central romantic conflict through the ingenious casting of one Timothée Chalamet.

With his chiseled jawline and a head of hair so perfectly windswept it incited a riot on the internet upon the trailer's release, Chalamet is perfectly cast as the man capable of bringing out Laurie's true f*ckboy tendencies, which have been embedded in the novel all along. When he confesses his love to Jo (Saoirse Ronan) and pleads with her to just say yes, the effect of the melodrama on the viewer is almost too much to bear. But unlike the Chalamet hive, Jo knows better than to give in to his charms. Laurie may look the part of the doting husband, but Jo is not interested in playing the obedient wife. And unlike nearly everybody else in the film, she will not let the hair blind her to his shortcomings as a partner.

Despite Laurie's outward appearance of perfection, he can be petty, oblivious, and rather dull. Though Ronan and Chalamet's tender, playful rapport as Jo and Laurie highlights the love they have for each other, Jo is resolute from the beginning that their relationship, at least on her end, is platonic. In the book, she refuses his advances when he tries to kiss her as she weeps over her sister Beth's declining health (not a great look, man); in the film, Jo admits to Marmee (Laura Dern) that she is lonely and while it does feel good to be so beloved by him, she still can't bring herself to feign romantic feelings in return. It's not just that Jo has bigger dreams to chase than marriage. It's that Laurie is also not the kind of guy Jo would consider an equal in terms of his own ambition.

Chalamet's at turns earnest and swaggering performance emphasizes Laurie's irresistible appeal and genuine tenderness for Jo and her family while not sugarcoating the fact that he is not infrequently a blundering fool. For all his shining moments, like when he helps save Amy (Florence Pugh) after she falls into a frozen lake and offers his carriage to Jo and Meg (Emma Watson) after Meg hurts her foot at a ball, there are plenty of less gentlemanly ones, like when he gets drunk and causes a scene in front of Amy at another ball, or makes a dig at Meg's appearance in her fluffy pink dress.

Look beyond the distracting beauty of Laurie, and it makes sense that he and Jo's connection would indeed have been a disaster as a marriage. Jo's intellect would not be challenged by Laurie so much as it would be admired from afar. She would not take kindly to his outbursts, and he would end up resenting her independence because despite all the love he has for her, he is not really looking for an equal to share his life with, but a wife. In short, he's exactly the kind of fool who, after being thoroughly devastated by the supposed love of his life rejecting his proposal, would go on to marry her sister. If that's not a f*ckboy move, what is?

More like this
Beyoncé & Madonna’s “Break My Soul” Remix Honors A Group Of Black Icons
By Stephanie Topacio Long
Everything To Know About 'The Hunger Games' Prequel Movie
By Grace Wehniainen and Radhika Menon
What's New On Netflix: A Third '365 Days' Movie & Lili Reinhart’s New Film
By Arya Roshanian
Twitter Is At Odds Over Taylor Swift’s Possible ‘All Too Well’ Oscar Run
By Brad Witter
Get Even More From Bustle — Sign Up For The Newsletter