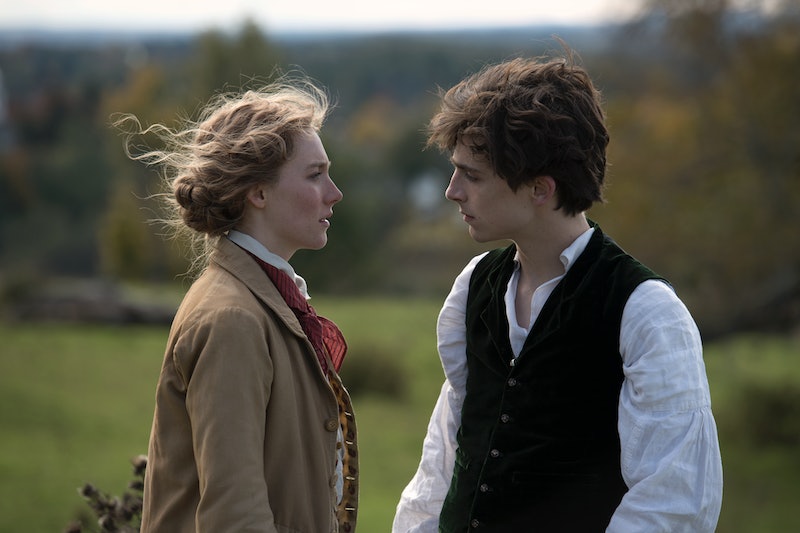 Say hello to the new Meg, Amy, Beth, and Jo March. The first trailer for Greta Gerwig's Little Women puts an updated twist on the Louisa May Alcott classic that will make you wish you had sisters like these.

This new adaptation, written and directed by Gerwig, stars Saoirse Ronan, Emma Watson, Florence Pugh, and Eliza Scanlen as the March sisters, who are growing up in post-Civil War Boston. Reuniting with her Lady Bird director, Ronan plays aspiring writer Jo March, who is working on the novel of her life. The most independent of her sisters, she's trying to find her place in this world where women are supposed to dream about being married. She's even told that her book must end with the female protagonist getting married.

"We've got ambition and talent as well as just beauty," Ronan's Jo says in the trailer. "I'm so sick of people saying that love is just all a woman is fit for. I'm so sick of it." If this tear-worthy monologue isn't played at the Oscars next year, it will be a real travesty.

Meryl Streep's Aunt March might have you tearing up for a different reason. Based on this teaser, she appears to be taking a page from Mary Louise's insult book of one-liners. "You'll need to marry well," Aunt March tells Jo in the teaser. When Jo claps back, "but you're not married," she let's her know, "That's because I'm rich."

Meanwhile, Timothée Chalamet will make you swoon as Laurie, the lovesick boy next door who has a crush on Jo. It won't be long before the internet turns those shots of Laurie dancing with Jo into memes. But poor Laurie, never stood a chance with Jo, who puts her career before romance. It's hard not feel bad for the boy when Jo tells him their marriage would be a "disaster."

Based on the trailer, it seems that Gerwig has kicked Jo's feminism up a notch, making it feel even more modern. That said, the original book was pretty progressive. As Laura Dern, who plays March matriarch Marmee, told Entertainment Tonight, Little Women was always ahead of its time. "Re-reading it now for the film, it's so radical and so incredibly modern," she said. Ronan agreed, telling ET, "The story [is] so relevant now to the confidence that women have in themselves and in taking their own path."

Back in June, Gerwig told Vanity Fair that she saw these characters in herself. “I always knew who Jo March was," she said. "She was the person I wanted to be.” And while Gerwig's directorial debut Lady Bird was an autobiographical look at her teenage years in Sacramento, specifically her senior year before college, it's Little Women that feels even more personal to her. “This feels like autobiography,” the director told Vanity Fair. “When you live through a book, it almost becomes the landscape of your inner life. … It becomes part of you, in a profound way.”

More like this
Nicola Coughlan Shared A Lady Whistledown Excerpt From ‘Bridgerton’ Season 3
By Grace Wehniainen, Alyssa Lapid and Sam Ramsden
20 Photos Of The 'Hocus Pocus' Cast Then & Now
By Radhika Menon
12 ’90s Movie References You Missed In 'Do Revenge'
By Radhika Menon
Margot Robbie Breaks Her Silence On *That* Viral 'Barbie' Moment
By Maxine Harrison
Get Even More From Bustle — Sign Up For The Newsletter