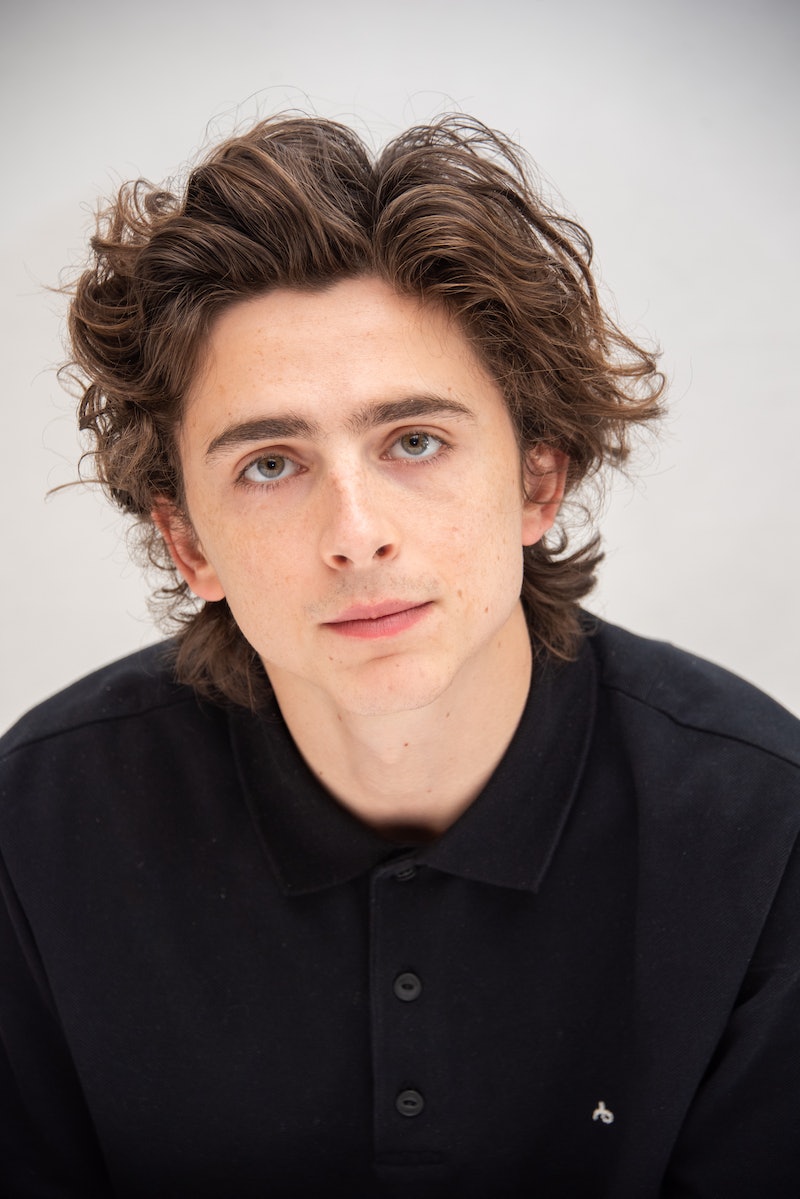 Timothée Chalamet is nothing if not a busy man, but he's somehow found the time to portray one of music's most influential artists. Timothée Chalamet is reportedly in talks to play Bob Dylan in a new biopic about the legendary musician's life, according to a Monday, Jan. 6, report from Deadline. Bustle reached out to Chalamet for comment, but did not receive an immediate response. And, while Twitter has already blessed the idea, there's one question that remains to be answered: can Chalamet sing?

Chalamet will reportedly be working with director James Mangold, who has secured a deal to direct a film that focuses on the early years of Dylan's career. The movie will cover his controversial transition from promising folk singer to rock icon, as he traded in his acoustic guitar for an electric one. Dylan has reportedly approved the project and is actively involved in the filming process, which means Chalamet's casting, if finalized, will have the singer's seal of approval.

According to Rolling Stone, the film will also feature some other notable musicians of the '60s folk era, including Pete Seeger and Joan Baez. “It starts at 19 when he [Dylan] arrives in New York City,” a source told RS. “And also heavily involves the rest of the folk scene at the time.” While the movie doesn't have an official title as of yet, it's currently being referred to as Going Electric.

Chalamet is still in negotiations to land the role, according to reports, but he looks like a sure bet. According to Deadline, he's already taking lessons to familiarize himself with both acoustic and electric guitars before filming. But, one thing the outlet didn't say was whether or not the actor will be singing in the film. Regardless, the Internet is very excited about the possibility of hearing the actor's vocal chops for the first time.

Some Twitter users also posted pictures that highlighted Chalamet's resemblance to a young Dylan, proving that he would be a smart choice to play the musician.

The news comes off the back of Chalamet receiving rave reviews for his turn as Laurie in Greta Gerwig's critically acclaimed adaptation of Little Women. His upcoming film projects include the Wes-Anderson directed The French Dispatch and the adaptation of sci-fi novel Dune, both slated to be released later this year.

He will also be making his London stage debut in the West End production of 4000 Miles in April 2020, so even if Chalamet doesn't end up playing Dylan as planned (and as the Internet hopes), the actor remains booked and busy.

More like this
Adam Lambert Called Out The George Michael Biopic Over Potential Casting
By Sam Ramsden
Jennifer Coolidge Recites “Jenny From The Block” Beside J.Lo In Her First TikTok
By Jake Viswanath
You’ll Definitely Recognise The Stars Of Amy Winehouse’s Biopic
By Maxine Harrison
Twitter Can’t Believe The Madonna Biopic Is Scrapped & Fans Have A Solution
By Alyssa Lapid
Get Even More From Bustle — Sign Up For The Newsletter
From hair trends to relationship advice, our daily newsletter has everything you need to sound like a person who’s on TikTok, even if you aren’t.