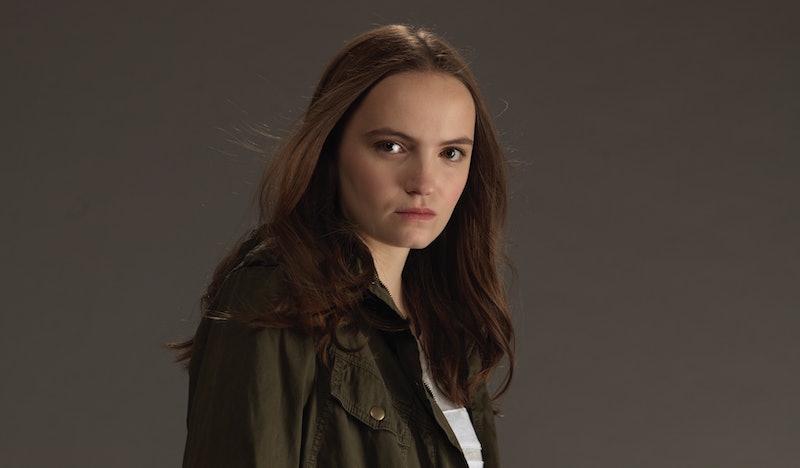 By the turbulent final episode of Tin Star season one, Abigail Lawrie's character Anna Worth is in something of a mess. The series finale of the Sky Atlantic crime drama — bleak, brutal, and often grimly funny — sees Anna shoot her rogue police chief father Jim Worth (played by Tim Roth). Jim, or his violent alter ego Jack Devlin, just killed Anna's first love, Whitey, who also happens to be responsible for the murder of Anna's little brother, Petey. Unsure of her father's fate, Anna flees into the snowy expanse of the Canadian Rockies.

"Yeah, she was in a complete state of turmoil," Lawrie says.

We're speaking in London, where Lawrie's lived since relocating from Aberdeen as a teenager. It's about three degrees and cloudy in the UK capital. Chilly? Yes. But nothing in comparison to winter in Calgary, Canada, where Tin Star is filmed. “We started in the freezing cold in January,” Lawrie said (for the record, temperatures dropped as low as minus 30 degrees C that month). “It was a challenge — but it was a lot of fun.”

The show marked an international breakthrough for Lawrie, who made her professional debut in the 2015 BBC adaptation of J.K. Rowling's The Casual Vacancy. Anna is a character that Lawrie was delighted to revisit for a second series. "It’s amazing to be able to go back to a character and flesh them out even more," she says. "She’s growing, she’s learning, she’s changing."

For those who missed the first series of Tin Star, let's recap: Anna is the teenage daughter of Jim and Angela Worth (Genevieve O'Reilly), who relocate from the UK to the small Canadian town of Little Big Bear. But Jim Worth's vicious past follows him across the Atlantic, and his alter ego Jack Devlin quickly re-emerges.

As the family disintegrate in the wake of Petey's murder, and with Angela unable to relinquish her increasingly intractable husband who's on a ruthless quest for extrajudicial vengeance, Anna's often left looking like the only adult in the room. And, all the while, she's navigating the turmoil of adolescence. "She has to grow up very quickly," Lawrie says.

Series two of Tin Star sees Anna stumble into an entirely new environment. Unwilling to return to her ruptured family, she's welcomed by a nearby religious community, Ammonite. Anna bonds in particular with Rosa Nickel (Jenessa Grant) and her parents, Pastor Johan (John Lynch) and Sarah (Anamaria Marinca). "She can sit down and have dinner with the Nickel family around the dinner table, which she rarely does with her own family at home," Lawrie explains. "So for a short while she finds comfort in simple things and a sense of routine."

But this is Tin Star, so Anna's sanctuary doesn't stay idyllic for long. "Things aren’t what they seem, and she needs to reconnect with her own family," Lawrie says. "She realises how much she loves them and how much they need each other."

Anna, Lawrie notes, is a "fully-rounded character," something that's, regrettably, still notable when it comes to roles written for women. "There could always be more roles like Anna. But I think things are changing," Lawrie says says.

"I think she’s a very intelligent and strong-willed young woman, so I do like her as a character a lot," the actress continues. "I relate to her in a lot of ways, but she’s also very different to me, which I like as well." Different, presumably, because of the relentless chaos of her teens? Oh, and the fact that she shot her own father, maybe? Well, yes. But also: "She’s a lot better at making decisions than I am," Lawrie says. "She’s someone who seems to know exactly what she wants and she sticks to it, which I wish I was a bit more like."

Alongside Tin Star, Lawrie recently finished work on the as-yet-untitled adaptation of Alan Warner's novel The Sopranos, in which she plays a Catholic schoolgirl whose choir takes a rowdy day trip to Edinburgh. Lawrie says that, in the past, she has contemplated going to drama school, but right now, she's content to see where her career takes her. "I’m happy just auditioning and trying to do as much as I can," she says. "I’m learning so much on each job."

And what about life off screen? The actor's home life is somewhat less dramatic than Anna's, of course. "I like being with my family, friends — all the usual things. Just being at home with my pals," she says. She won't, however, be watching the second series of Tin Star (which launched on Sky Atlantic and NOW TV on 24 Jan.) with her family gathered round. "Last time, I watched all of it with my family and it was very weird. So I think I’ll just watch a few episodes," she laughs, adding: "On my own."