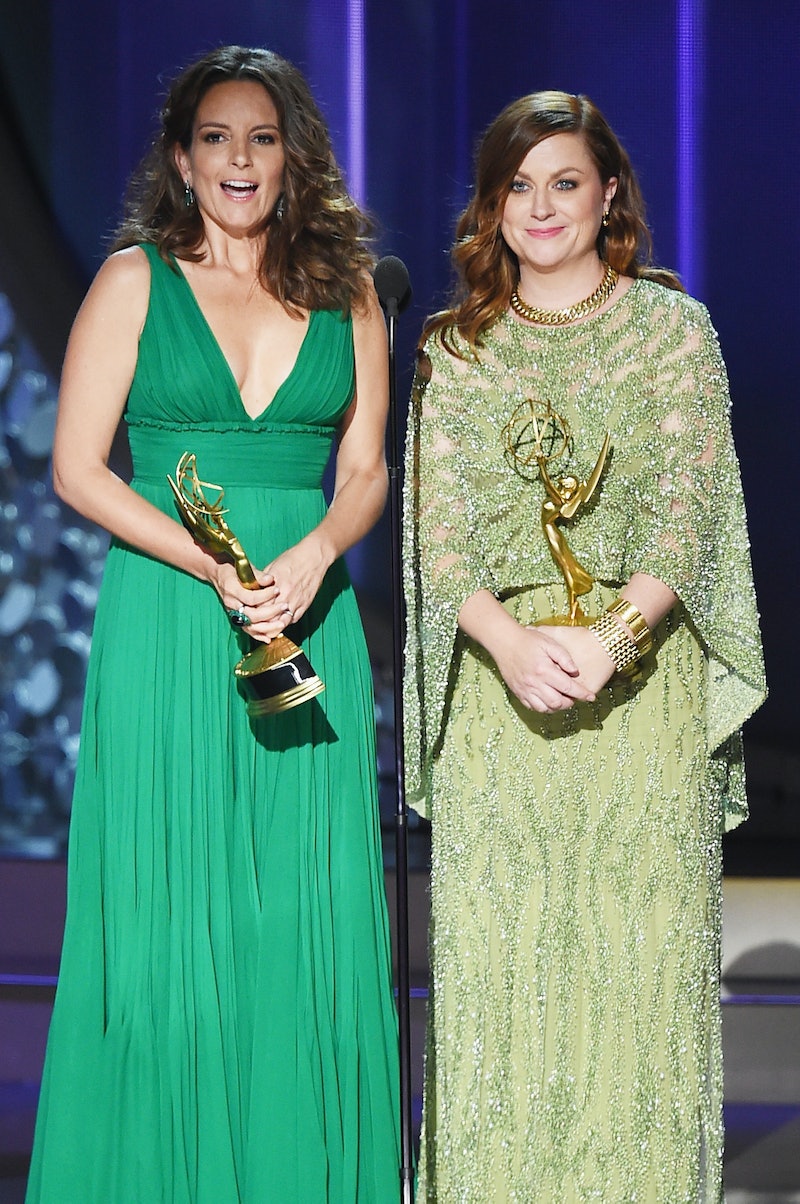 "NBC has long been the home to two of the funniest people on the planet ... and we didn’t want to wait any longer to share the great news that they’ll be hosting the Globes once again," NBC Entertainment Chairman Paul Telegdy said in a statement obtained by Bustle shortly after the big news was announced at the Television Critics Association Tour in California.

Lorenzo Soria, the President of the Hollywood Foreign Press Association, also praised the duo in a press release, saying, "there’s no denying that Tina and Amy’s comedic chemistry is infectious. We can’t wait to see the dynamic duo return to the Golden Globes stage." The HFPA's announcement comes just one week after the 2020 Golden Globes, which were hosted by Ricky Gervais, another comedian who has a longstanding relationship with the awards.

Fey has won two Golden Globe awards for her work on 30 Rock as well as six Emmy awards for that sitcom and her time on Saturday Night Live. Poehler — who earned 4 Emmy nominations for Parks and Recreation — famously won a Golden Globe in 2014 for Best Actress in a Comedy Television series. "I just want to say congratulations to my friend Amy Poehler," an excited Fey said after her co-host's win before joking, "I love you, and there's a special place in hell for you."

The pair hosted the Golden Globes for three consecutive years from 2013 until 2015. In an interview with The Advocate ahead of their final time hosting the awards, Fey reflected on how much fun it was to host the show with her friend of over two-decades. "From the moment we met each other in Chicago in 1992, we’ve had tremendous respect for each other," Fey said at the time. "What makes it great now is that the only time we see each other is when we work on things ... so those experiences are exciting and fun. We’re both thrilled to be there, and hopefully that’s reflected in the work."

Despite having a lot of fun together — and earning glowing reviews every single time they hosted — Fey told E! News just before taking the stage at the 2015 awards that they had no plans to ever return to the Golden Globes again as hosts. "We’ve had so much fun doing it, but it’s its own special moment in time that will end," the 30 Rock star said at the time. "Listen, it’s our last time! What are they going to do, fire us?! Who cares!" Thankfully, it seems like the possibility of teaming up as hosts once more was just too much for Fey and Poehler to resist.