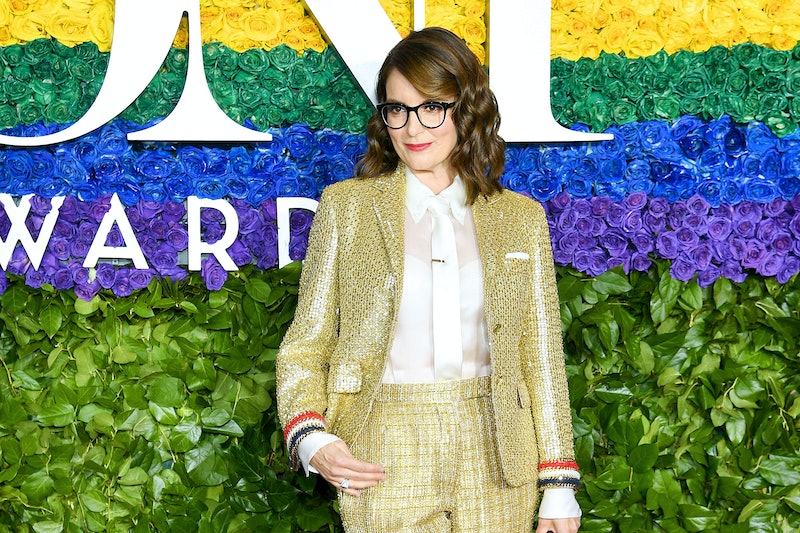 Tina Fey has a distinct red carpet style that can't be mistaken. That's because she truly knows how to execute deceptively simple, yet glamorous looks. That style philosophy was on full display during Broadway's biggest night. Tina Fey's 2019 Tony Awards outfit was a glorious and golden powersuit that she paired with several killer accessories, like classic black pumps.

Fey's sparkling Tonys ensemble could go down as one of her best red carpet showings EVER. The blue, white, and red cuffs of her blazer matched her envelope clutch. She finished the look with a swipe of bright red lipstick and black glasses.

Fey's 2019 pantsuit may remind fans of her 2018 Tonys gown since both looks totally sparkled and boasted a metallic edge. The actor and writer thoroughly dominated the 2018 Tony Awards, having earned 12 nominations for her Broadway adaptation of Mean Girls. Fey sparkled in a silver Thom Browne dress with feathers at last year's ceremony. She returned to this year's show as a presenter and looked just as amazing while doing so.

It would make total sense if you were expecting Fey to wear a frock with some sort of feathery trim to the 2019 Tonys. That's because she has done so at back-to-back Tony Awards shows. Fey's 2018 dress had featured a fringed bottom, while her 2017 dress was sleeveless, tiered, and boasted feathers throughout.

However, she switched things up this year and the expertly coordinated results speak for themselves. Fey wore her chestnut locks in loose, beachy waves that framed her face, which is her go-to. She opted for a deep side part and faux, swoopy bangs. Her look was all about the little details that came together to make an even bigger fashion statement.

Fey shimmered in silver a year ago. But her raspberry-hued lipstick added both a pop of color and a contrast to the straight, metallic dress. Her strands fell in waves around her face, much like they did at this year's ceremony.

Fey's feathery LBD from the 2017 ceremony was by designer Sally LaPointe. It had movement and was anything but basic. The swingy gown was easily one of her most memorable red carpet ensembles to date.

Flashback to the 2014 Tonys, when Fey wore a navy blue Oscar de la Renta gown with a fishtail hem and silver pattern woven throughout. The fabric boasted a cool, wet look effect, which upped the glam quotient. As you can see from this rundown of past looks, Fey usually wears her strands down and around her face at awards shows. But she switched things up and opted for a sleek and chic bun at this ceremony.

Tina Fey's 2019 Tonys look was further evidence as to why she is so much fun to watch at red carpet events. She took a powersuit and made it her own, courtesy of all the cool details. This is one look your coworkers will be talking about at the water cooler tomorrow.