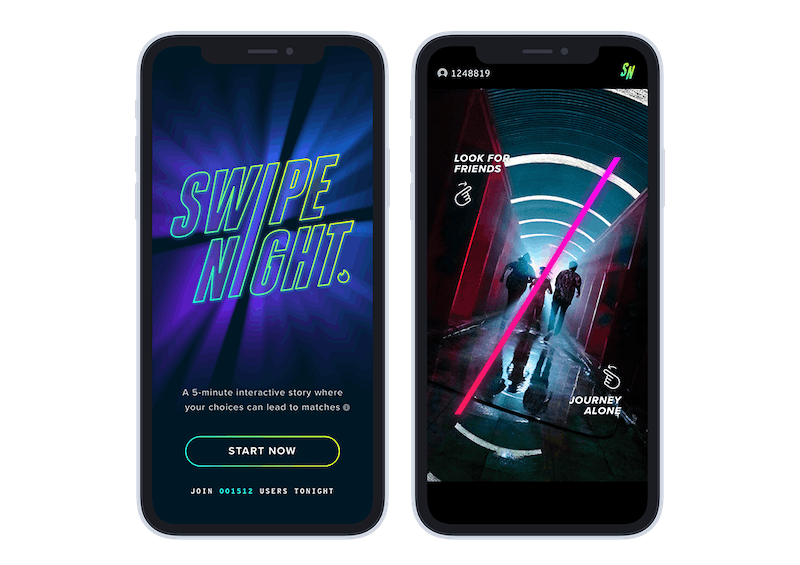 Simply swiping left and right based on a handful of photos and brief bio is so 2018 — now, Tinder is offering its users a chance to find their perfect match based on the decisions they would make in an apocalypse. On Friday, Sep. 20, Tinder announced plans to launch a choose your own adventure TV show on the platform, called Swipe Night, which will match users based on the decisions they make throughout the story.

The series, which will launch on Oct. 6, will feature a "first-person, apocalyptic adventure," according to a press release obtained by Bustle, that will allow users to make key choices at certain points in the story to decide what happens to them and their characters next. "And their choices dictate more than just the story; they also impact who they match with and what they will chat about once the epic journey ends," the statement continued. "We can’t think of a better way to break the ice than over emojis and the apocalypse." Basically: think Black Mirror: Bandersnatch meets Dating Around, with the possibility to meet your soulmate — if you survive.

However, if you're hoping to live out the dystopian romance of your dreams, you'll have to clear out some time every Sunday night in October. According to the release, new installments will be released at 6 p.m. local time, and until midnight, any users on the Tinder app will be able to match up with others looking to survive the apocalyptic adventure series.

Swipe Night will follows a group of friends — led by the Tinder user — embarking on a quest for survival in the middle of an apocalypse. Each installment will star actors Angela Wong Carbone, Jordan Christian Hearn, and Shea Gabor, and is directed by Karena Evans, who is best known for helming some of Drake's most iconic videos, like "God's Plan" and "Nice For What."

The 23-year-old director worked with Big Mouth writer Nicole Delaney and Insecure scribe Brandon Zuck to craft an adventure that will appeal to Tinder's millennial and Gen-Z user base. "We jumped at the chance to work with a brand like Tinder," Evans said in a statement. "They gave us the opportunity to experiment with new ways to tell a story, with a highly-engaged, diverse community that’s incredibly open-minded."

With each new installment, users will face major moral dilemmas and practical decisions, with just seven seconds to make each and every choice. And the decision making will affect more than just the story: after each week's episode, key choices that users made will be visible on their profiles, in order to inspire conversation amongst people swiping on the app and help refine matches.

Nothing ruins a potential relationship quite like finding out that you and your partner would make completely different choices when faced with imminent danger. And now, in addition to establishing themselves as an unexpected player in the streaming wars, Tinder will be able to make sure that the matches they make will survive anything — even the end of the world.

More like this
Michael B. Jordan Tackled His "Public Breakup" With Lori Harvey On 'SNL'
By Brad Witter
The Bachelor’s Christina Mandrell Comes From One Of Country Music’s Most Famous Families
By Brad Witter
All The Clues About Aly & Zach’s Relationship Status After 'The Bachelor'
By Brad Witter
Here’s What Happens To Bill & Frank In 'The Last Of Us' Video Game
By Brad Witter
Get Even More From Bustle — Sign Up For The Newsletter
From hair trends to relationship advice, our daily newsletter has everything you need to sound like a person who’s on TikTok, even if you aren’t.