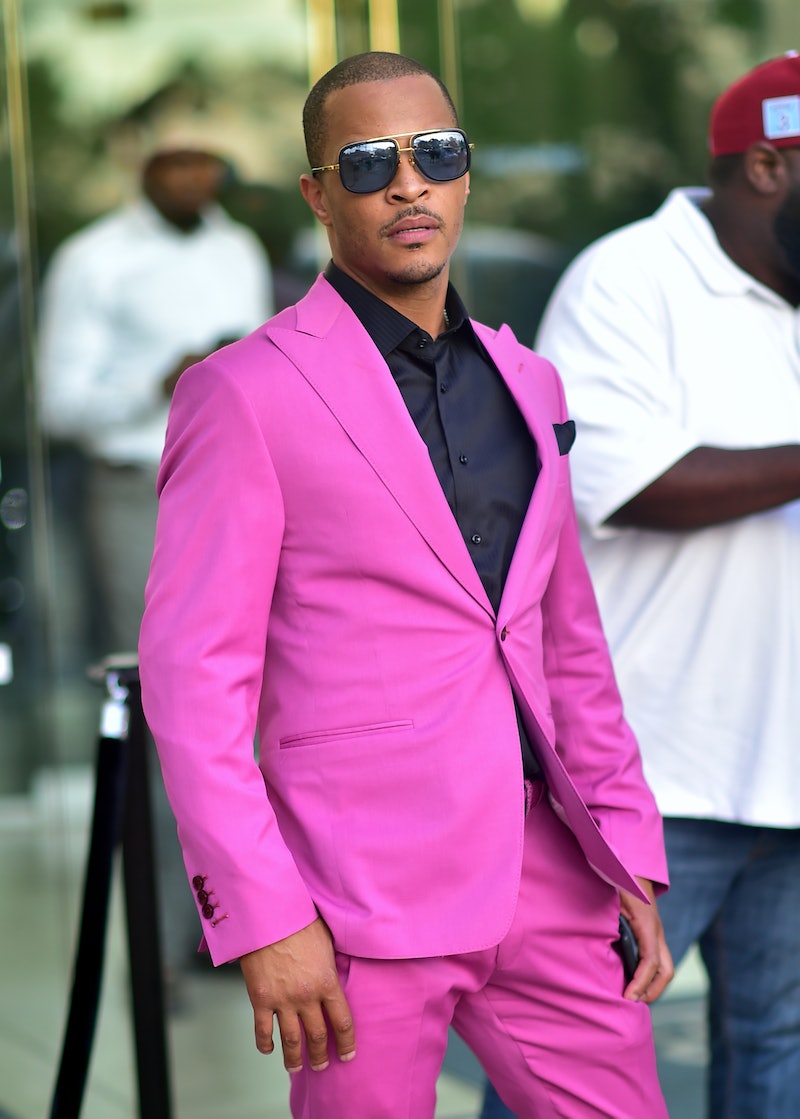 Ladies Like Us podcast hosts Nazanin Mandi and Nadia Moham have removed T.I.'s interview about his daughter after a day of outrage. On Thursday, Nov. 7, they took down the episode and also issued an apology for how they initially handled the conversation. T.I. has yet to respond.

The controversial interview aired on Nov. 5, in which the rapper — real name Clifford Harris Jr., —discussed how he takes his 18-year-old daughter, Deyjah Harris, to the gynecologist every year to ensure that her hymen is "still intact." According to the rapper, this has been an annual tradition since her sixteenth birthday. (Bustle previously reached out to reps for both T.I. and his daughter, Deyjah Harris, about his comments, but didn't receive an immediate response.)

Needless to say, T.I.'s interview with Mandi and Moham received a lot of criticism on social media. Many were quick to point out that many things can cause an individual to break their hymen — not just sexual penetration — something T.I. said he knew, but felt comfortable disregarding. "Look, Doc, she don’t ride no horses, she don’t ride no bike, she don’t play no sports," he recalled telling his daughter's doctor on Ladies Like Us. He later added, "I will say, as of her 18th birthday, her hymen is still intact."

Rather than pushing back like many listeners had hoped they would, Mandi and Mohan reportedly laughed at T.I.'s comments and said, "Somebody check on Deyjah, she's a prisoner in her own home!" And on Thursday, they released a lengthy apology on Instagram. "To everyone confused, angry and hurt by the recent episode of Ladies Like Us, we want to apologize for our knee jerk reaction to the uncomfortable topic." They continued, "We were completely caught off guard/shocked and looking back, we should have reacted much differently in the moment."

Mohan and Mandi also said that they support women and believe that women should be able to do whatever they want with their bodies. "There was absolutely no ill intent towards any party involved & feel deeply awful about the entire incident," they added.

Many individuals have commented on the situation, including Chrissy Teigen, who tweeted on Nov. 6, "def did not think we would be talking about hymens today. or TI." As upsetting as the rapper's comments are, T.I. stirred up a conversation about how important it is for everyone to be in control of their own body. Hopefully T.I. has been paying attention to the conversation. And, for the rest of us, in the words of Teigen, "alright it's time to mute 'hymen.'"

More like this
Amanda Gorman Shared A Powerful Message On Meghan Markle’s Penultimate Podcast
By Darshita Goyal
Michelle Obama Opened Up About The "Discord And Discomfort" Of Marriage
By Stephanie Topacio Long
The One Detail From The Tampongate Scandal That The Crown Missed
By Karen Fratti
The 'Love, Lizzo' Harry Styles Scene Is Just 1 Moment That Made Fans Feel Seen
By Brad Witter
Get Even More From Bustle — Sign Up For The Newsletter